This time of  year is so weird it's like we are just floating around waiting for January 1st to kick in.

I worked on Thursday and Friday. Friday was great since Anxiety Girl is off on Fridays. If you've never sat next to someone who leaks anxiety out of their pores you are lucky. I think she needs to lay off the coffee and drink some calming tea.

I spent all day Thursday and Friday going through some files and shredding stuff. I shredded 4 black trash bags of papers on Friday. I thought I was getting sick afterwards but I think it was just all the fibers in my nose.

We had a teleconference and they told us they have enough money to pay for us to work the next 2 pay periods which would bring us to January 18th.  Hopefully they will pass a budget before then.

A local police officer was killed on Christmas and they went on a man hunt for the "illegal" who killed him. They didn't release his name for 3 days because they weren't sure exactly what it was but they knew he was an illegal. Doesn't that sound fishy? The big Cheeto even had to tweet about it. I'm hoping the guy that they caught really is the one that did the deed and not some poor Mexican who they are using for their political agenda. Not that I don't feel bad for the police officer and his family, I do, but I've listened to a lot of crime podcasts where they arrest people quickly to "close the case" and they turn out to not be the person who actually committed the crime.

Anyhow, Friday night we had a meeting for the New Years Eve party that is quickly approaching. Apparently it's "40's" themed. Who just has 40's stuff hanging around? Not me lol. I'll be wearing a dress I bought at one of my events I attended before I knew the theme. I'm not going out and buying a bunch of stuff I'm never going to wear again.

Yesterday was "put up the tables day" for the party. They like to drag out the party stuff over several days. Today they are doing lip sync practice but I'm doing doing that lol. Here's me goofing off lol. These hats are funny. 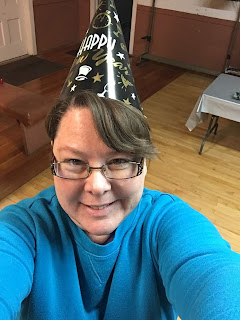 I suggested they add a few more tables this time since people always "reserve" tables and then everyone else gets there and there is no place to sit. Not like you can reserve a table for 2-4 people when it sits 10. In my opinion I don't think they should be reserved at all unless everyone gets a chance to reserve them at the same time but that's just my opinion. Club politics lol 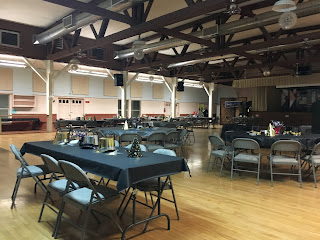 This year it's going to be a "potluck" and not start until 7:30 with the hopes that it goes until midnight. Usually we do an east cost midnight and then retire to the bar. I imagine that will mostly still happen.

So I started off I was going to blog about something else so I think I'll put that in another post since this one is long enough now haha.

Fingers crossed that the government gets it act together so you guys can get back to work - in the meantime...enjoy floating!!!! HA!
I love the picture with the hat!!! Happy 2019 to your entire family! I hope it is filled with blessings galore!!!