Saturday was Scott's dad's 90th birthday so we went out to the cemetery to pay our respects. We took his mom and sister Suzie out there with us. Scott and my kids had been out there since he got the headstone.  His mom, sister and I had not been since the funeral over a year ago. His headstone is very nice. He's in the "Little Arlington" section since he was a veteran. 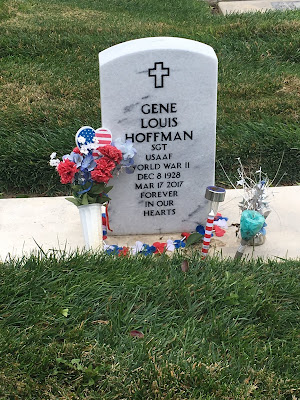 One thing about not moving far from home is you have a lot of family in the cemetery. This is Gene's mother's. My mother in law was upset that the headstone didn't look as nice as it used to. I think there is some way to shine them up isn't there? It's marble. 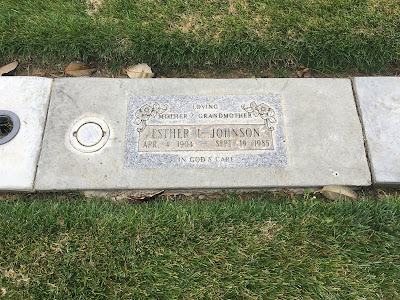 Next my Grandma and Grandpa on my dad's side. I always have a hard time remembering exactly where they are but now there is a big headstone next to it with my aunt's picture on it. That's a bit creepy since she's alive and well. Her 2nd husband is buried there and she has bought the plot with it for herself. 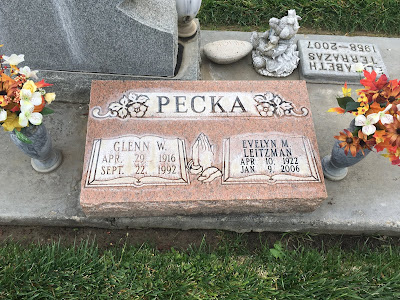 Then my Grandma Marilyn. I can usually walk pretty close to hers without looking too hard. I swear she's driving around in the car with me half the time so there's that. 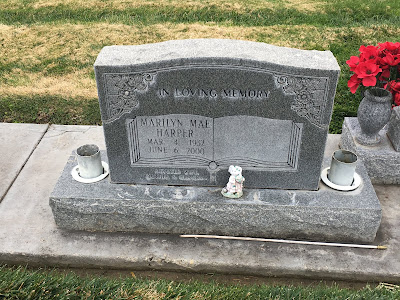 Probably should have took some flowers to fill all those empty flower cups. Scott's dad's does not have a flower spot. I noticed some people put little potted plants so that would be nice.

I have told everyone that I don't want to be buried, I'd rather be cremated so everyone doesn't go broke trying to put me in the ground. That got me to thinking of how different things are when you don't have a site to visit. I guess you'd just do something else in memory right?

After our outing we went to lunch at Perkos. Of course the seat my mother in law sat in on the bench seat was worn down but it never occurred to her to just move over a bit haha. Just complain that makes it all better! Gotta love the elderly. We all had burgers and fries but of course hers were too salty. The doctor doesn't want her eating too much salt or drinking coffee (Scott said he has not heard him say anything about her food..)

I think that's the most exercise she's got in years since she had to walk from the car to the graveside and then around a bit. I keep telling Scott we need to take her out more so she gets out of the house. I can't imagine only ever leaving the house to go to the doctor. How depressing.

She'll be coming over to my mom's for Christmas dinner so hopefully she enjoys that.

That is really nice that you took her to the cemetery and too lunch. It is kind of funny how old people get something in their mind and it is gospel! My Grandmother was like that and I am sure with my personality, I will be really bad when I am old! HA! I can see it coming already - I will be a horribly, crotchety old woman! HA HA! I hope she does enjoy herself at your Christmas celebration...it has to be so depressing to not be able to do things on your own anymore. You are a wonderful daughter in law! Hugs

I second what Ann said about it was nice of you to give her this day outside of her house.
I read all these blogs about widow older women and it's sad and I fear that life.

I too want to be cremated.
I never go to my mom's grave site when I am in my hometown. Well never is a strong word. You can count on my hands how many times I've gone since she died in 1969. It doesn't feel right to me. But that's another long story. :-)
I talk to her all the time anyway so I don't feel I need it because she isn't there.
I know Julie, I'm weird.