Ok finally my last post from April! What a month!!

Lucy with her disapproving look. Lol so funny she's sitting on that "Cat's Meow" book too. Someone saw this picture and said they liked my vintage sewing machine. HA! I guess it is. I did get it when I was like 16. 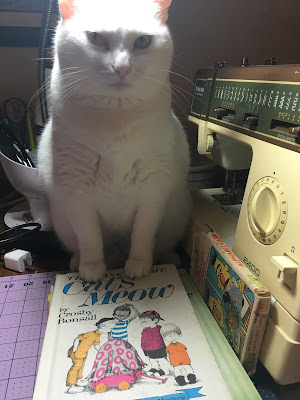 This rainbow was amazing! 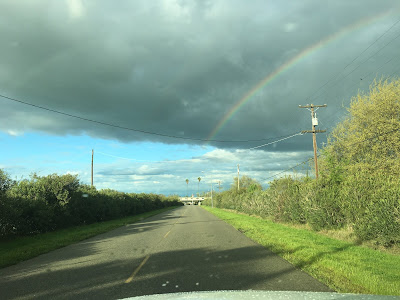 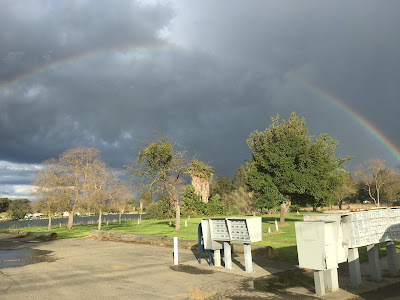 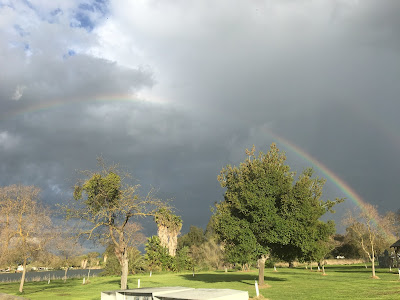 So inbetween every thing else I do I sell stuff on Etsy. I have two three stores now, one for my handmade items and one for sewing stuff that is mostly patterns and now a third for paper stuff (haven't worked on that one much yet).  One of my favorite destressing things is thrift store shopping. Over the years I've sold a lot of things but now I'm trying to be more focused on things I buy to flip and keep it to sewing stuff, cool paper stuff and fabric/vintage linens.

This day I popped into this thrift store to kill a little bit of time and I found this little crate stuffed with patterns. Most of them were for making stuffed dolls like Santas and Snowmen and the like. I decided to just take the whole crate up and ask "how much". The girl that was ringing me up was all frazzled about something and just charged me like $5 for EVERYTHING in that basket.  I have made several hundred dollars off that little crate of patterns, go me! I still have some up in my Etsy store too. I had put them into lots since I had so many but should probably clean up my sales posts and pictures one of these days with what's left. 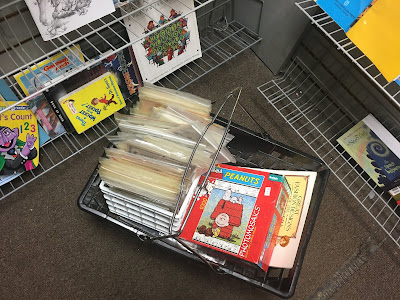 So my friend came over to use my wifi since she doesn't have any and needed to do something for work.  Buster LOVED her bag lol. 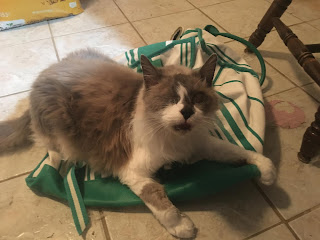 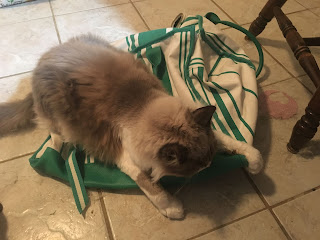 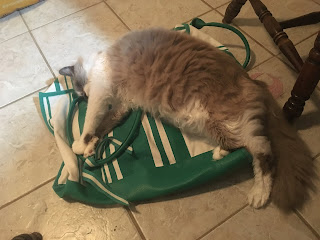 He's such a goof ball 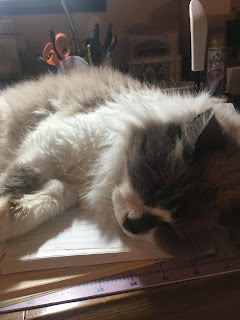 I got this new toy! I am going to make some more notebooks from vintage books. I made a few but I need to figure out what kind of paper I want to use for the future. So far I just raided my scrapbook paper. Which works. I wish I wouldn't have got rid of the big paper cutter(s) I had now. I will probably get another one if I get deeper into it. 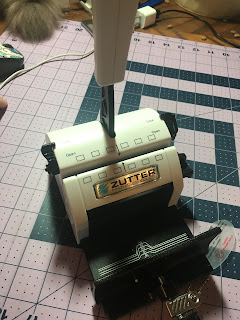 I sold the little otter one at the car show. 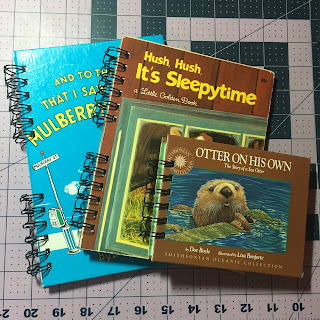 I have the stories at the end of the blank pages but I think I'll do more every other page on the next ones. 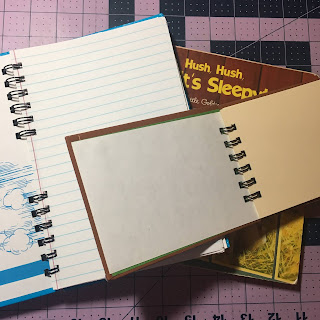 Jessica is allergic to April. 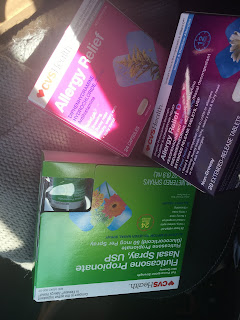 This was a rock painting night (God how did I squish that in?)  with the Entertainment Committee. They said they were going to put the rocks around to advertise for our 80th Anniversary party that is coming up in September. 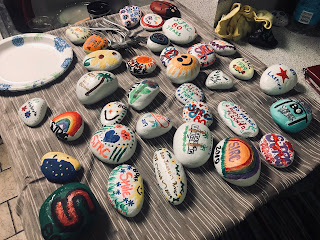 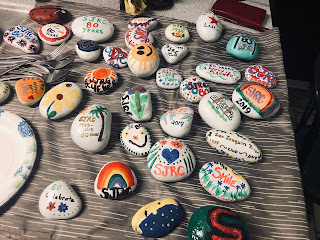 Remember how Cadbury Eggs used to be REALLY BIG. Now they are smaller and have less in them. Disappointing lol 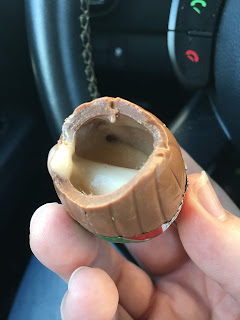 We have so much wood from my mom's house. She had a bunch of trees that died after her yard flooded a couple years ago. We need to have a million bonfires. Too windy today though. 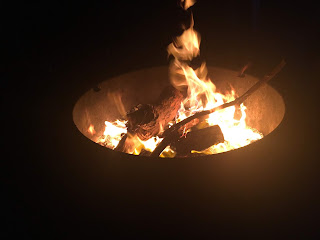 The dollar store the day before Easter. "I'll just run in real quick" The guy in front of my had 3 beautiful little girls who were so dirty and hadn't had their hair brushed in forever. Sad. Men if you have your little girls you need to learn how to use a brush and at least do a pony tail. (oh and make them take a bath) 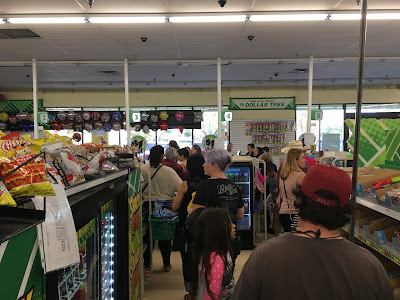 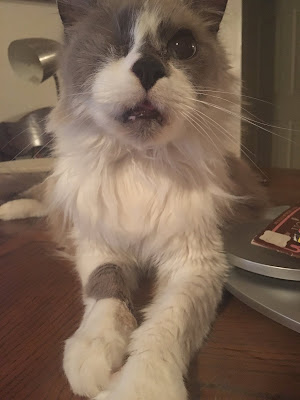 I had wrote a sign and taped it by the sink that said "wash your own stupid dishes". I took it down for Easter and then someone hung this up lol Not that that helped at all. 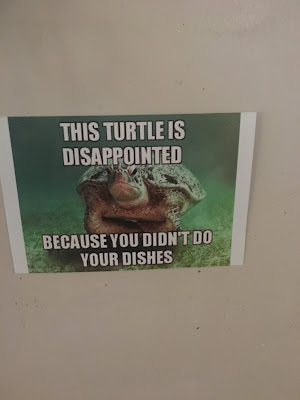 If you work for the Government you know what this is about. Co-workers car. 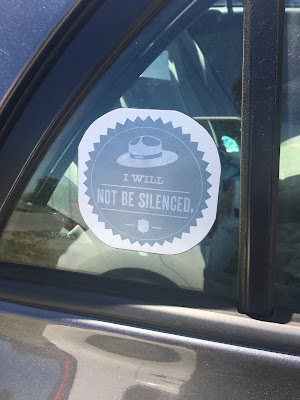 I'm glad we have a huge animal bed. 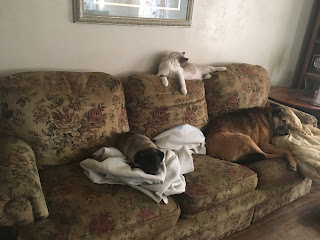 This is the toilet after Scott passed out and fell (or fell and knocked himself out, we don't really know). Still seams weird he broke it that way. He came to with one arm in the toilet and his head on the floor. He had a bump on his eyebrow but no concussion. 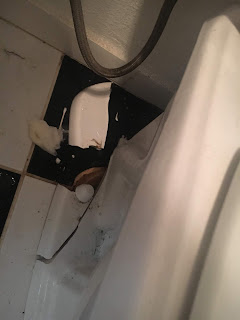 When he was in the ER they wheeled him out for a CT scan of his head. That's when I noticed someone had left a bloody towel in the room (not us!). So freaking disgusting. It was removed when I pointed it out. 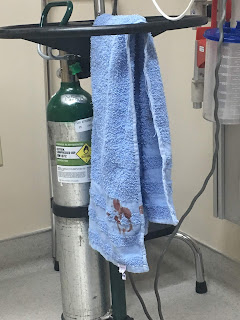 Days later, an MRI on his knee. He had a sprained ACL and MCL along with the cellulitis. All on the same area. 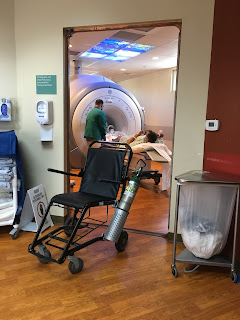 Tops of his legs a few days in. Swollen much? 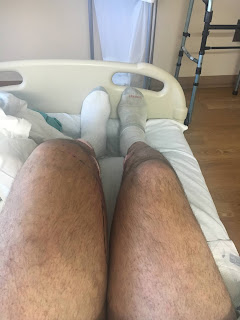 And that concludes our APRIL posts! Stay tuned for May, which was a bit less crazy!

There was a lot of info here.
You've been busy.
Yea, that towel - ick. Glad you told them.

And what is up with the Cadbury eggs. They are so much smaller and you're right less yummy filling. I wish an American Company had not purchased them, they ruined everything!
(read best in a whining voice)