Well I could use another day to the weekend. Unfortunately that wasn't possible. I wish I could just take every Monday off!

Friday night Scott and I ended up going out to dinner to Sizzler and getting the salad bar. That was nice. I of course had to have some clam chowder and some nachos to go along with my big salad plate. Oh and dessert too of course. I always get their apple crisp stuff and put some vanilla ice cream on top.

Saturday I sewed all day. It was glorious. Scott spent the day frustrated trying to get Trevor's truck to start. The truck apparently has some kind of weird security feature that is tripped and he can't get it to reset. So basically you can't start it for more than like 2 seconds and then it turns off. Looks like we'll have to buy some parts to replace the security system next.

Right when I was getting ready for bed he started having another AFIB session. He refused to go to the ER (he's already on all the meds they give for that) so I went to bed. Last time we went they just hooked him up and went yep you have AFIB. Eventually it stopped and we went home. Thankfully it stopped eventually this time too, although I think he didn't sleep well.

Sunday morning we had breakfast and I was making my grocery list when Scott's mom called and said she thought she was having a heart attack. Good God call 911! She didn't want to of course. I told Scott we could call but he was hesitant so we just got in the car and drove to her house (we live at least 15 minutes away driving over the speed limit).

We got there and she was in her chair shaking a bit and then she said OH GOD THERE IT IS AGAIN. Scott was like what's it feeling like and she's then calmly tells him. So we get her up and into the car and to the hospital. They did an EKG and then when they poked her for the IV her palpitations stopped. They said she was having supra-ventricular tachycardia, so similar to AFIB but a different area of the heart.

We then spent HOURS at the hospital waiting for something I don't know what. They did blood work and a chest x ray and that was ok. Then her blood pressure was pretty low so they gave her a bag of IV fluids but it still stayed low and they were like ok well sending you home. The RN was very expressive about her not taking her high blood pressure meds that night and to call her doctor to maybe get them adjusted.

After we finally got her home we went and did her grocery shopping (and my partial list, luckily I use Google sheets and could bring it up on my phone lol). Had to take that back to her house and then I went just a little bit later than planned over to my friend's house to watch the Grammy's. She uses the record feature so we were a bit behind the real show but pretty much caught up with it by the end after going through the commercials. I think I only missed the red carpet part.

Some of the acts were certainly interesting.... Others were really nice though.

So what did I sew this weekend? More of the zip bags (I cut out a million I think lol) Saturday I worked on butterflies, lady bugs, bees and insects. 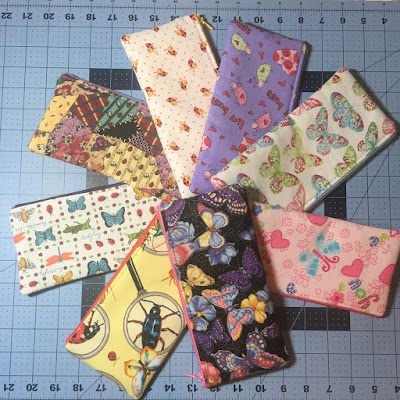 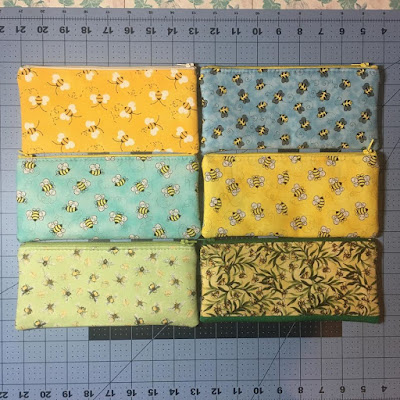 and then a dog and a cat made it through from the last batch. The dog one I did some piecing (love doing that kind of work!).  Not sure why the cat one didn't make it in the last round. 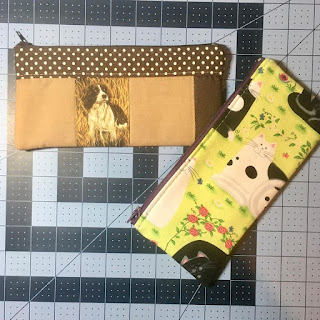 I started working on foxes and frogs but didn't get them finished. Close though! I thought I was going to get them done on Sunday but maybe tomorrow night. Tonight I have Bunco.

I sold a bunch of cheap stuff on Etsy this weekend. I have my Etsy store clearance on 50% off so some of it was that. After renewing 4 times I'm going to start pulling them out of my regular inventory and bundling them in larger lots I think. Maybe just do a big flat rate box and put them on eBay just to get rid of them and still make some money. Kind of funny that I sold 3 cross stitch items (all different buyers). The Airplane book and the one to the right of it (they are paper puppets) were on eBay. The book I got from the church sale so basically free and the puppets I bought at the flea market not that long ago for $2. I didn't know what they were but thought they looked interesting. They are from some kind of learning program that was on cassettes and VHS. Someone knows what they are!

Here's to a fun productive week with no more hospital visits please!