Good afternoon! I kept getting side tracked and forgetting to post this morning. Who is happy it is Friday?
Work has been so slow this week it doesn't really make a difference other than I won't be tethered to work computer.
In my boredom yesterday I decided to list what I have left for patterns again in the Facebook groups. Down to $2 each. I have made a pretty big dent in them. I might try $1.50 next week and see if that gets rid of a few more. So far I've made about $150 selling from what's in this picture here. Not too shabby! My Etsy store has dwindled down from over 800 items to about 50. 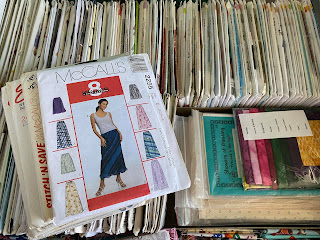 Yesterday I was looking at some ideas on Pinterest for scrappy quilts. I found this one called the Ultimate Scrap Quilt. Originally I thought I'd break those big blocks into 4 but I didn't math right and ended up with 16 haha. After doing one of those I was like maybe I'll keep them big. Still debating cutting those big blocks in half. Thinking one swipe down and across the bottom with the rotary cutter and then put them somewhere else (maybe the other side/top). I made 2 "blocks" with pink & black misc fabrics that kind of blend. Don't mind the ugly wall behind it. Still need to make a repair in the sheetrock so I can paint it... 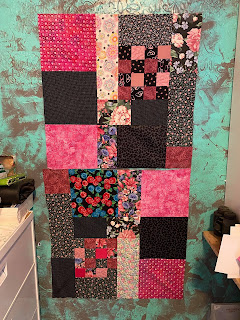 That's my excitement from yesterday. Tomorrow is a little car show out where I live. They are just having it members and their families so it will be small. I am doing my craft booth there. Probably won't sell much but we can hang out. It has been super windy the last couple days so hopefully it will not be windy tomorrow.
Jessica and family are starting to feel a little better. That was a rough stomach bug they got. I bought the baby a high chair and it came today. They have been doing what they call "Baby Lead Weaning" with him. Basically just small bits of food that he can feed himself. We called that toss some food on the tray when my kids were little haha. 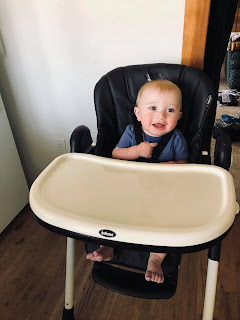 He sure is getting big! I think he's going to be like his mom and not actually crawl. She did a weird scoot scoot thing on her butt and didn't walk til she was about 14 months. She was quite the talker though.
Hope everyone has a great weekend! I could go for a nap already!
Pin It
Posted by Julie H at 2:25 PM