Hello! Good afternoon! Late getting on here today. I had to go to work this morning to help someone sign something and then come back home because the office is closed due to possible COVID exposure. Great! Glad I wasn't working on the office last week.
Yesterday I had my booth at a big outlet mall. This outlet mall is pretty high end stuff. I did pretty good but had been hoping to do a bit better.  It was a little bit windy but nothing flew over so that was good. 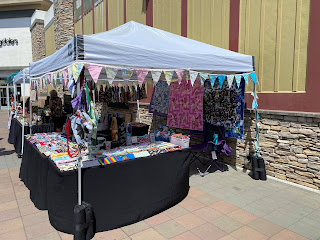 I have one more show which is mostly just a hang out one in my neighborhood. They are doing a scaled down version of the car show for just members and their friends/family. The booth fee was like $10 so nothing to worry about "making back". After that I'm done until it cools off here so probably September. I've learned my lesson on doing craft shows in the heat. Not worth it!
Saturday I ended up spending the day working on organizing fabric AGAIN. I know I do this a lot but I keep moving things around.  Friday night I was working on a project and forgot to close this drawer. Tina came in and "fixed it" for me. She likes to kick everything out for some reason. It's a good thing she's cute. I started cleaning them up but then decided to reorganize them and one thing led to another! 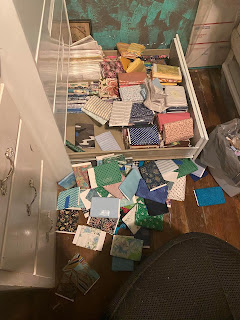 I had to redo this drawer since when I moved it against the wall all my cards were facing the wall. Got that straightened out. 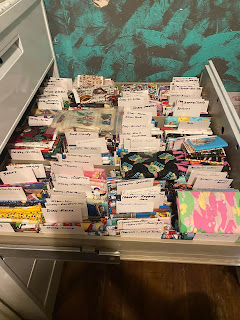 Overflowed into the next drawer, and then my smaller pieces of fabric 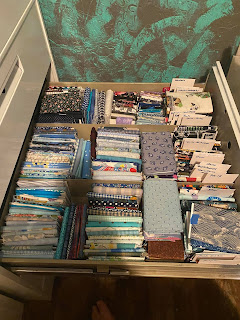 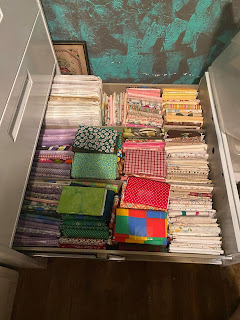 I had had some of these in the drawers and then some were on larger boards, some not so now they are all together 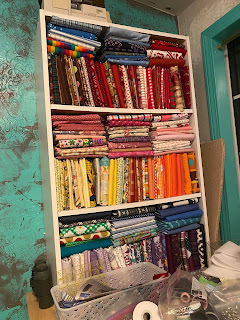 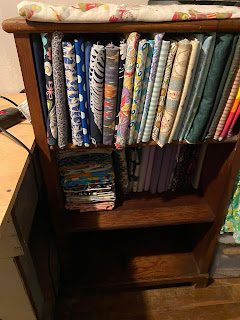 and then organized this section with cards to divide with all the theme and character fabrics. 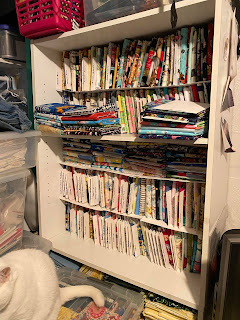 Still have more stuff in boxes and such to go through but it looks good for now. Next up I'm going to go through the boxes in the way of the door shutting since it's still baseball season ;)
Previously had one box worth on shelves but took them down when I moved furniture around. I think I'm down to 4 boxes worth on shelves so I can get them ALL on shelves that would be great! Obviously need to work on de-stashing some more too.
Trevor went to school today so it has been pretty quiet here. He said he was going to get his hair cut after school too. There is just this week and next week left of school. Hopefully he can pull it out and graduates. He loves living on the edge.
Today is supposed to be a deadline for work but it's awfully quiet. Looks like some people won't be making it!
Hope you all have a great day!
Pin It
Posted by Julie H at 1:59 PM