Sunday I had my "long run" with my half marathon training group. Amazingly I wasn't sore from our huge bike ride. I thought for sure I'd be limping around.

My alarm clock went off at 6am and I gave myself a few minutes to wake up before dragging myself out of bed. Today we were to run 68 minutes. They also put a lot of emphasis the last couple meetings to bring fuel for our Sunday run. They had given us some Power Bar gels to try. 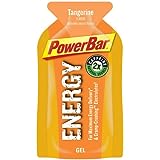 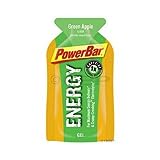 We actually ended up using those on our bike ride Saturday (Scott and I are both experimenting with fueling with all our activities coming up). Scott had used the tangerine and I did the sour apple, it wasn't too bad.

We also had used the sport beans I had picked up at Safeway. 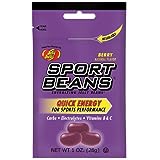 Those were actually really good, just a tiny bit different than regular jelly beans (which makes me wonder if just plain ones would work, they are so cheap). We shared one pack and then I ate the other one before we started our ride back. I'm definitely going to buy more of those.

I had one Clif gel left that I had bought at Safeway (they seem to have pretty good sales on energy bars and stuff I've noticed the few times I've popped in there) so I took it with me. 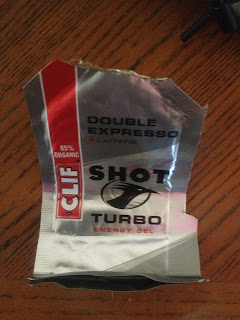 I also wore my new fuel belt that Scott had bought me for my birthday. I had not worn it yet since my runs haven't much over an hour and I do fine without anything for that amount of time. Someone had told me that I should use body glide if I wore a fuel belt but I didn't seem to have any problems. Although that could have been because I had two layers under it for most of the run.

At my halfway time I turned around to start my run back and opened my gel. It was way thicker than the Power Bar gels. Pretty gross too. But I got it down and drank some water but then I had the sticky gross wrapper to take care of. I put it in my belt and got it all over it. 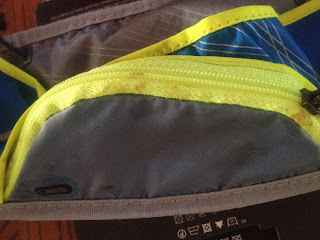 GROSS! Luckily it washed right off but I'm thinking if I use those again I'm going to take a little baggie to put the garbage in.

My step mom wasn't able to make the run (she said she over slept!) so I ended up running by myself again. No one really runs the same pace as me. I seem to be a middle of the pack type runner at this point.    When I was almost back I got this horrible side cramp. I stopped and tried to stretch it out a bit and when it felt better I ran a tiny bit more but it came back. I was just about to the parking lot where we meet back so I just stopped my run a couple minutes early and walked in. 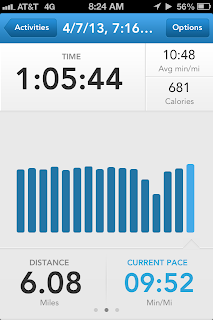 My time back is always a little bit faster than my time going out. I was looking at the elevation on Runkeeper and noticed that it's a bit uphill on the way out even though it seems flat. That explains the easier run back I guess!

While I run I usually listen to Pandora but I'm thinking more and more that I just need to make myself a good running playlist. One song came on while I was running that I just HATE to listen to while running. I didn't bother skipping it though because then it always goes to a commercial which isn't even better.

Do you have a favorite type of fuel for running?
What's your favorite running song?

My favorite right now is

It just so bouncy and a tiny bit edgy :)

you are a freakin' beast mama! so inspiring! love following your blog and insta!
-karly

Thats a great time!!! I am running that 1/2 marathon next month and really need to start trying some of those gels and shots.....maybe test a few for my 10K this weekend. Thanks for the baggie idea!!!

I enjoy reading of your running because running is not something I can get my head around. :-)

Personally, I like the sports beans. I never really liked the gels, and the shot blocks tend to be a lot to chew all at once and I feel like I am using too much energy just trying to chew the damn thing that's supposed to give me energy, you know?! Anyhoo - here's what's currently on my playlist - but I'm always looking for new beats to jam to :)
http://eatrunsleepandrepeat.blogspot.com/p/jams.html