Tonight I went out for my "easy" run. 45-50 minutes was the plan. We ended up going kind of late for a few reasons.

Trevor had asked me to throw the ball for him to hit. (So not something I enjoy but I felt bad telling him no lol) We did that for awhile and then when we got home I was cleaning up the kitchen a bit before making dinner. Scott and I made dinner together and then of course we had to let the food settle before running.

Scott had some interval work to do on his 5k-10k program. We started off together and then he'd run back to me after his faster run segments. I was running at a snail's pace. I forgot to stretch before we took off and my legs took forever to warm up. 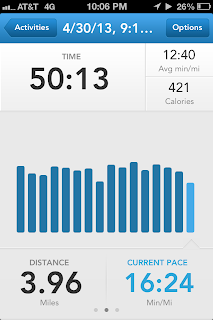 I'm not sure if Scott totally finished his intervals or if he just walked the end but he got a side cramp and walked quite a ways back to the house. I would run ahead and then back to him so we weren't too far apart. I felt bad for him that he was having a hard time. Those intervals are a bitch! I remember I quit doing them at the end of that training program because I hated them so much.

The last 15 minutes or so though I finally felt all lose and hit that point where I knew I could just run forever. Well maybe not forever but if you are a runner you know what I mean! I was going to stop at 45 minutes but ended up running past the house and around the street behind ours and did the whole 50 minutes. I didn't even make it 4 miles but I ran the whole way even though I really wanted to walk. Funny how just having him running in the area will keep me running!

Today at work I had someone ask me if I still walked on my lunch. I told her sometimes but I hadn't done it in awhile. She told me she had a nightmare last night about her stomach taking over or something so she wanted to walk with me if I went out. I didn't walk on my lunch though since I knew I had to run tonight.

A little while later another co-worker told me that she had just signed up for her first 5k and wanted to know if I had any pointers. I told her to do the couch to 5k, run slow, 3 days a week with break days in between and to listen to music. I saw tonight on Facebook that she did her first one. I always get excited for people who decide to take up running!

Every run isn't always a great run. Some really suck! But overall the feeling I get from running is pretty fantastic.Pin It
Posted by Julie H at 11:11 PM