I still feel like I'm half asleep. I stayed up too late last night finishing up these little bags I had started last week. Part of my "using up the small pieces of fabrics" before I got side tracked reorganizing lol. Not sure what I'm going to work on next. Something scrappy I think haha. 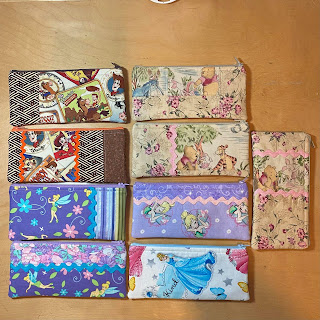 A few weeks ago I sent away to try this food sensitivity kit I saw on Facebook. Everyone in the comments had good things to say about it (like 100's) so thought I'd give it a go. I'm always bloated and having stomach aches so thought it would be interesting to see what it said.
I got my results back last night and wow! I'm so surprised what it said. I thought it would have grain type items on there but those were barely on the chart (Rye was the highest but still way in the low).
I didn't have anything in the HIGH reactions category but EGGS showed up in the moderate and mild. Eggs! Eggs? Crazy! I never would have thought. Also, look at that with green pea. How weird! Green pea was actually the highest score of anything on the list. I don't eat a lot of peas but I did growing up. We had canned peas with dinner A LOT (never buy canned veggies anymore, just frozen or fresh).

I knew cows milk bothered me, I never just drink milk anymore. I used to when I was younger but blech doesn't even sound good anymore. I DO have it when I have cereal. When I was in full diet mode I used almond milk instead. Might have to go back to buying a carton of that to have around. Although I haven't been buying much cereal because it's like candy and I can't stay out of it. I don't like black tea so that's not an issue. Mushrooms? How weird! I do eat mushrooms every so often, usually in a recipe. Winter squash I was sad about until I read it and it is not like zucchini and yellow squash but acorn, butternut etc which I don't usually eat because they are too much work lol.

So now to try cutting out eggs which we eat EVERY weekend and mayo to see what that does.
Scott is working from home for the rest of the week. I know I've talked about the dumb car we have here that belonged to someone else. Years ago he brought home this POS car that belonged to someone he knew through work. He was going to do some body work on it. He worked on it for like 2 days and then it sat in our yard for like 10 years. It has been the source of many arguments. Well the guy that owned it sold it to Scott's boss. I guess his boss wanted him to work on it so he's "working from home" for the rest of the week on the stupid car. Hopefully this means it will be gone soon. But pray for me since that is a lot of days with all of us home lol. I can't even escape to work since the office is still closed due to a covid exposure last week.
My neighbor just fired up a jack hammer. Joy!
Hope you all have a great day!