Good morning Happy Thursday!
It's already getting hot here. I haven't even bothered opening the windows this morning since I'm going to turn the air conditioner on soon.
Yesterday I decided to make up those fat quarters I got at the antique shop into some zip bags.
One side 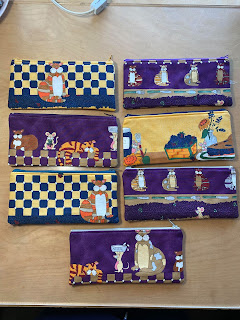 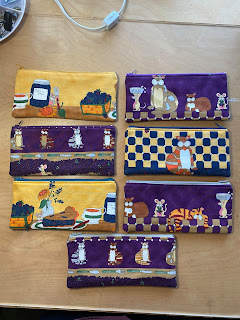 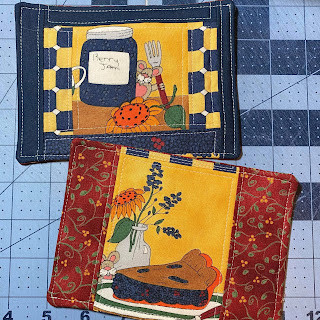 I put some stuff I made up on Etsy. Trying to do that as I go now since the craft shows I had all stacked up keep getting cancelled or suck haha. I don't think I am going to sign up for any outside of May until September since it gets too hot and I just can't handle the heat.
I have May 16th at the Outlets & May 29th little car show out where  I live.
My sister in law got some tickets for them to go to the Monterey Aquarium. They were trying to make it a big family trip but I wasn't able to get tickets for the same time as them FOR JULY so I said we'd just skip it this time. The first time I tried to log on to get tickets there was literally 11000 people in line ahead of me. When I tried again later it was like 2500. By the time I got in there was nothing until an hour later than everyone else's tickets. I don't know how long they let you stay in the aquarium but if it was only an hour that wouldn't be worth "going together".
Oh well we are going to plan our family camping trip for the week after that so that will make things less stressful.
I have an appointment tomorrow to take my phone in for a new battery. I haven't even had it a year and the battery is failing. I think it is all covered but even if I had to pay a bit it would be worth it to not have to have it plugged in all the time. So annoying. Last night it wouldn't charge over 1% even though it was plugged in for hours. It did finally charge up over night but I still have it plugged in because it usually just drains really quickly.
I think I am going to buy myself a new laptop since Trevor has pretty much taken over mine and held it hostage. There is a lot of stuff I still like to do on the computer vs my phone.
Well hope you all have a great day! Probably going to play with some scraps and work on putting some fabric on my book case Scott finally fixed last weekend. I need to be able to close the sewing room door when he's yelling at his baseball team ;)
Pin It
Posted by Julie H at 9:36 AM