Good morning happy Saturday! Instead of annoying work noise I have animals lol. The puppy would not let me lay in bed for anything. Now that I'm up she's taking a nap and Rusty is whining at me for some reason.
Yesterday after work I went to see my friend Cassi, she is working at a kiosk at the mall for Mary the lady that runs a lot of the events I do. This kiosk is going to do really well. It was the first day it was open. 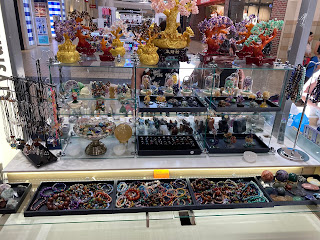 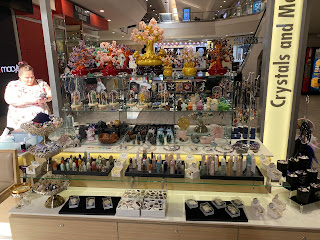 I hung out for awhile and then went to look around for baby clothes and just ended up at Macy's since they had some right by the door. I got a couple outfits for the new baby. She will be here in 11 days or less! I put in for my sick leave that for when she's arriving. I will only have 1 day on the whole time sheet since Monday the 20th is a holiday. I didn't realize that or I would have put the 21st on the plan for the sick leave too lol. So just one more work week and a day to get through then I'll be on baby sitting break for a bit.
When I got home from the mall I worked on my red white and blue scraps. I was watching this show about the crazy Mormons and when it was over I looked to see what time it was and it was 12:30 lol. I wasn't even tired but figured I should go to bed. Going to iron this and then cut out the tote bag pieces and then onto the next colors. Once I'm done making the squares/going through the scraps then I'll do a bunch of tote bags at once since they will be all cut out. That's the plan anyways. 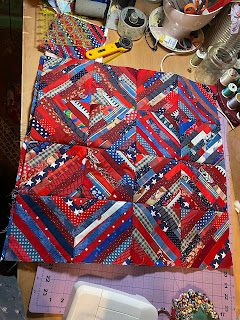 This morning I was thinking how nice it was that Scott used to make coffee every day. Sucks to have to make my own haha. Maybe some day he'll be home again. The AC at his mom's went out and he thought it was toast but he must have played with it some more because now he was just trying to get a part for it. Always nice when that happens and it's 106 for a few days.
Yesterday Trevor said he got some kind of chemical in his eye at work. He said it was just irritated by the end of the day. I asked if they did the wash and a report and he said yes. Hopefully he won't have any damage from it. If it is still bothering him I'm going to have him go get it checked out. (He's at work now).
That's all I've got for now, guess I'll go take Rusty out AGAIN. Sheesh.
Pin It
Posted by Julie H at 8:46 AM

My sister told me when ours went out last summer that why does it happen when it's 100. I said because when it's 40 degrees it's not on? I don't know but that's when it's on I guess. :-)