Good morning happy Thursday! I was up at 5 to take the puppy out and then the other dogs. Then I went back to bed and slept like a rock til 8:30. That was nice!

Yesterday after dinner I went and got Daniel and he played and watched movies. I'm pretty sure he's saying "BAD DOG!" when the dogs are rough housing. He runs around with them it is so cute.

He was terrified of the volcano on Moana so no more of that one. He ran to the door crying like take me home! Turned that off and switched over to Aladdin and he was all happy haha. I really need to cancel my Direct TV now that Scott is never home. I could put that $125 towards one of my other bills and get them paid off faster. Literally never watch the tv now that I have figured out how to stream Disney Plus onto it for the little one.

Before and after he was here I worked on the string blocks I was working on before the baby got here. I was cleaning up Tina's mess in my room and then next thing I knew I was sewing and not doing any of the other stuff I said I was going to do yesterday haha. I finished up the scraps I had and have just enough for a tote bag so I'll cut that out today. I just have some brown strips left to sew up and then figure out what I want to do with the remaining squares I have sewn up. My scrap box is almost empty! Except for a few things I have saved of holidays and to do mug rugs or something with. 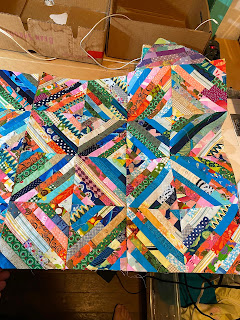 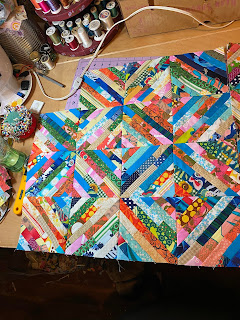 Rusty has to lay RIGHT next to me. I tried leaving those boxes there so he wouldn't have room but he still squished in. Had to keep moving his foot so I could use the foot pedal for my machine. 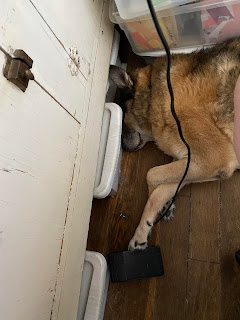 Jess sent me these yesterday. I did get to snuggle with her three times yesterday too :) (I forgot I went over there to take Daniel's sister home too) 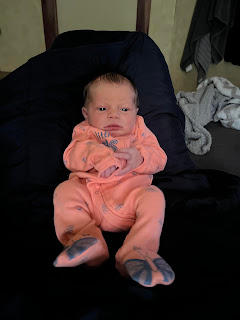 Love this one, so sweet 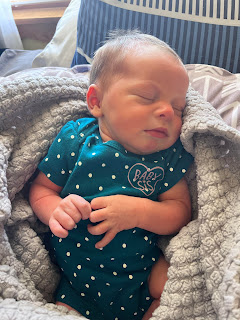 Ok today's plan is to take a shower because I'm gross and then work on my scraps until Jess needs me.
Pin It
Posted by Julie H at 9:50 AM