Good morning happy Monday Eve. Blech. Sucks I have to go into work tomorrow AND wear a mask.
Friday evening Melissa came over to go out to dinner. I went in the shed after work to pull stuff out for the garage sale and she got there just in time for me to hand boxes so I didn't have to keep going in and out. I found my baby bikini, so cute. I am going to fix the elastic in the bottoms for the new baby. My girls were always the wrong season to wear it. Will be cute for one picture at least ;) 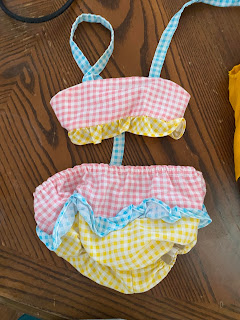 and I FINALLY found Scott's Tiger shirt that his mom used to have to sneak off him to wash when he was little. I need to mend the under arms and then hopefully I can get it onto Daniel for at least one picture. 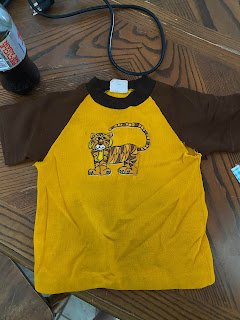 We went to Mongolian BBQ for dinner and then to the grocery store since we had no food. We put the puppy in the crate when we left and came back to shit all over in it. So then she got a bath and I had to wash the tray off because it smelled so bad it was gagging me lol. Crate fail! Most likely she won't end up going in the crate much, she's been pretty good just hanging out with the other dogs minus the peeing and pooping all over. Most of the time she hits the puppy pads but not all the time. I hate this part of puppies.
Saturday I was up early setting up the yard sale. This is after I pulled anything I cared about and left the rest for free lol. I made about $62 I think including a few of my craft booth items from 8-11 so not too bad for stuff that was mostly just junk in the shed I didn't even know I had. The neighbor brought over the bar stools to add to the mix and this morning they are gone. 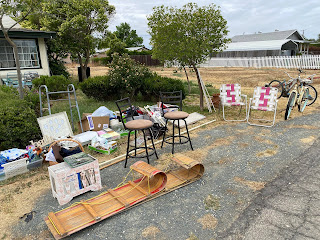 It was over cast but I still managed to get a bit of sun and then I was super tired so just laid around for awhile. Scott brought us pizza and hung out with us for a bit. Finally he nodded off so I went into my sewing room haha.
I finally finished the big trash bag of fabric I had dumped on my table. I am going to wait awhile to work on another one so I can sew for a bit. It took me three sessions of working on these to get them done. Then I went back to my other project I had started when the fabric arrived. My pink/green/yellow scraps that I was playing with. These are the 1.5" strips. I think I am going to make them into a tote bag. My plan is to finish going through all the scrap strips I have then make up a bunch of tote bags (I think haha) Of course now I have 9000 more unsorted scraps from that lady's fabric stash but we'll work on those later ;) 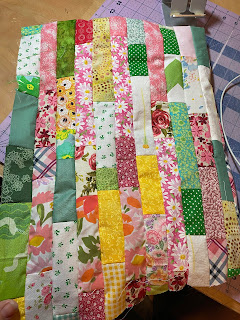 While I was working on those I watched this movie someone was talking about on Tik Tok. They said this movie had a $500k costume budget (in 1964!) . I rented it on Amazon Prime for $3 to watch it. I never knew Shirley McClain was so beautiful. I just think of her as Wheezer on Steel Magnolias haha. There was a lady that I used to see walk her dog in the club that looked so much like her with her grouchy face bahaha.

After that I was looking to see what else there was to watch and Survivor popped up. I'm pretty positive I already watched the season (28) but I can't remember who won so it's ok to watch it again lol.
Not sure what the plan is today besides cleaning up puppy messes. I bought stuff to make salads again so I should do that and probably take a shower ;) Tomorrow is my anniversary so we might do something today? or maybe just go to dinner tomorrow. We shall see. I'd be happy with just sewing today ;)
Pin It
Posted by Julie H at 9:03 AM