I was so sad to see that my cosmos must have become too heavy and they've fallen over. The stem cracked too 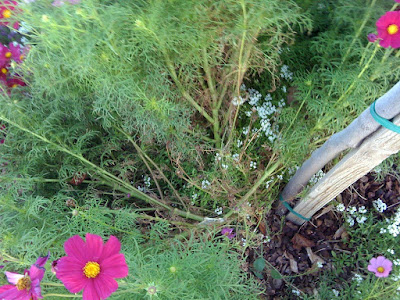 For now I'm just leaving it since it's still pretty, just laying down!

And THEN a gopher decided to eat a bunch of petunias on the one small bed on the left side. Little fucker!! UGH nothing more annoying than mounds of dirt and plants with no roots!! I tried to drown him out but the water literally ran for 1/2 an hour and never filled up the hole. He probably came up in the neighbor's yard or something!! My mom said she's been putting moth balls in the holes so I'm trying that now. He'll probably just make another one a little farther down!

Me to my friend on IM: so have you ever tried moth balls for gophers??

Him: I could never get between their tiny legsPin It
Posted by Julie H at 5:00 PM

That's funny (not the poor flowers). It also makes you think exactly WHAT is he tinking about with the animals now.