Another dose of "life's not fair"

So yesterday was fun. Not really but sheesh I'm tired. Did the work thing. Followed by rushing home to let the dog out. I loaded him up in the car and then off to pick up the little kids and go to Jessica's game.
The game in which, her coach said she'd be playing left field, but was once again put in right field. The game where poor Jess struck out twice and then the coach put her on the bench for the rest of the game for punishment. The game in which afterwards the coach pointed out who struck out and made a point of be-little-ing them in front of everyone. The game in which my daughter cried most of the whole way home after. 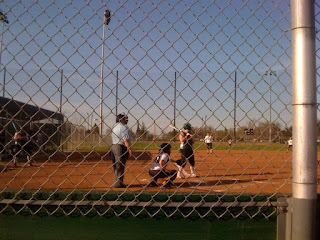 What doesn't kill you makes you stronger right?
So then we went home and I threw some food together and then I drove Jess to the batting cages. I paid for an hour because that was what she wanted. An hour at the batting cages? REALLY LONG. She took a few breaks so I tried it out. 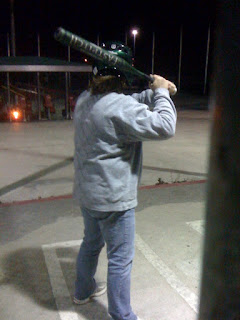 I think that's the first time I hit a ball since 6th grade when I somehow made it on the softball team for our elementary school. Have I mentioned that I'm afraid of the ball?
While we were there Scott was sending me messages asking if we needed help? Do we need him to come? WTH? I think we can figure it out on our own. I think he was hurt that I did his job and took her to the batting cages but seriously, if you want to be around, BE AROUND. I know he drives a lot for work but HELLO, if you leave on time you can be home for your family and that call to let me know you are leaving work is always nice. 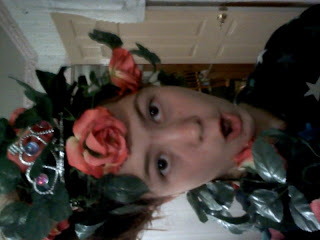 Turn your head sideways and look at this picture of Melissa, isn't she cute. That's a garland lol. She's a nut. So Jess was pretty tired when we were done but her spirits were much higher.
When we got home I had to do some laundry and put away the food. Huge sink full of dishes. Guess I get to do those tonight after work. I'm really starting to feel like a single mom with no one else helping to do anything except when it's convienent to them. It would be nice if people could pitch in and help because things need to be done, not because someone asked!
There is supposed to be another game today. It's sprinkling a little bit.
I'm praying for rain.
Pin It
Posted by Julie H at 8:36 AM

that really shows what kind of girl she is that she wanted to go to the batting cages and not just sit home and whine about it! Great job!!!

I was lucky and soccer practice got rained out last night. Is it bad if I hope we are still rained out tomorrow morning at 8am?

My family has recently learned that if they don't help out more I will make their lives a living hell.

good for her! that's awesome that she went and practiced some more... it speaks volumes about her! and i hope you get a break this weekend mama!!