Because I'm a slacker, here's another catch up post

Well I guess it's time for another catch up post! We've been so busy and I've hardly had anytime where someone isn't breathing down my neck.
Last week Melissa got her cast off on Thursday. She walked around touching things with her arm and rubbing it to get reaquainted it with it. Silly girl! We got back next month again. Hopefully it will be all back to normal by then. She has one more month of getting out of PE too! 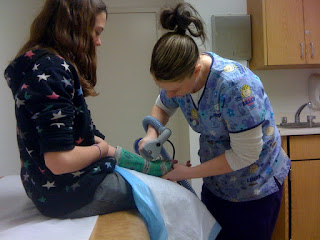 Saturday we went to Chuck E Cheese for Trevor's birthday. He had a blast! I got him a DS from one of my online friends awhile back and gave it to him for his present along with a new game and then my mom got him a game and a case for it. He is in heaven with it. My mom got him Mario cart and you can do more than one player with it so Melissa’s ds and his can both play the same game together. It’s pretty cool. 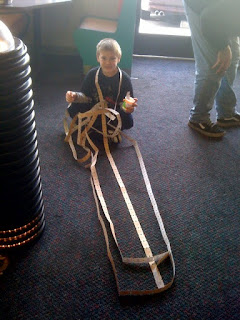 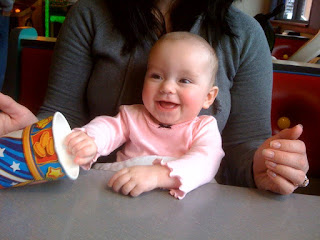 Isn't my niece cute!
After the party we came home and I took a nap lol. Then later we went to my brother’s for my niece’s party. We took Rusty with us not realizing it was going to be a lot of people there but he did REALLY good and I felt like the proud puppy momma. Scott’s nephew recently moved to the same town that my brother lives in and he came and brought his girl friend that is originally from Russia. They moved here when she was 7 and she was so much fun to talk to! I ended up talking to her most of the night. 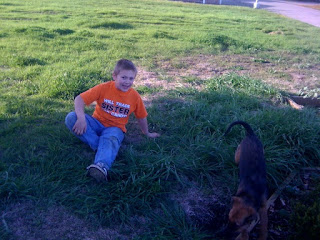 Sunday we had no water until almost noon! Something happened with the electrical that went to the main well and you get really limited in what you can do with no water! TG there was some water in a big can outside from the rain that we could use to flush the toilet! Ended up cleaning up the living room and TG the water finally came on so I could take a shower for book club.
Went to book club and everyone seemed pleased with my book for next month . I picked the Grapes of Wrath. I read it in high school but I want to read it again. Book club was at this one lady’s house and she is an artist and so is her husband so you can just imagine how cool it is! Eclectic and everything is painted!
After I got home I went out and worked in the yard a bit and got the area where I’m going to put some bricks all weeded out and then it was dark and Scott went and got some Chinese food for Trevor’s birthday dinner while I cleaned up the kitchen. Poor kid was coughing his head off when they got home and just wanted to sleep. We got him to eat a bit and then he headed for the recliner and a blanket. I thought I was going to keep him home today but he wasn’t coughing too terribly bad this morning so I sent him on his way.
Pin It
Posted by Julie H at 1:24 PM

What is that around Trevor's neck and all over the floor???

Lots of good stuff going on! No cast, birthdays, and book club. I was wondering what kind of harness you had Trevor strapped into then I realized it was Chuck E Cheese game tickets. Musta got a great prize with all of those. Grapes of Wrath is such a good book, I would read it again too. I had to read it out loud to this foreign exchange student we had, it helped her understand it so much better if we read it to her rather than her stumbling over the English words by herself. My husband and I took turns reading GoW out loud for days and days.