Date Day With The Boy

My son and I went on a date yesterday. Actually we went to run some errands, but it was just the two of us and we were gone for a few hours so it was kind of like a date. 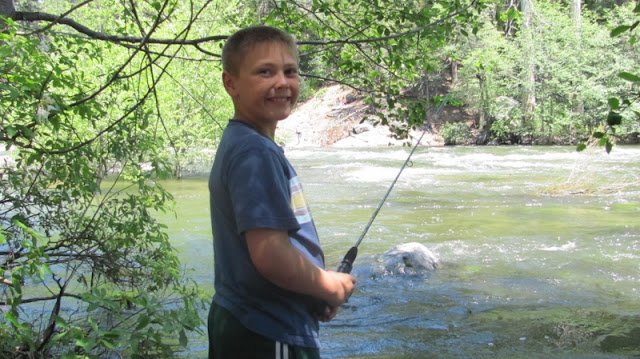 I got paid a day early yesterday and so I wanted to go to the jewelry store to pick up my wedding ring that I had finally took in to get fixed. I hustled over there and GAH! They were closed. Who is closed on Mondays?? Well beside Chinese food places. This place is "downtown" and I can't help but think THIS is why people don't shop downtown. Reliable hours would be nice. I guess I'll try again tomorrow when I have to go to town again.

After that we swung by the library so I could pick up some books I had on hold. He picked out a Magic Tree House book to read, which is good because it's actually something interesting to read. Not like those Pokemon books he always wants to get.

Then it was off to the mall for new shoes for him. He's been wearing his slip on generic vans with no socks. Suddenly the smell is enough to kill small animals and elderly people. So we went and picked him up a new pair that he HAS TO wear socks with. Ick.

We also needed to get him some jeans since the ones from last year are a wee bit too tight. Two trips to the dressing room and 6 pairs later we found something that will work. AFTER I hem them. :sigh:

Then it was home and he went to show the neighbor his new shoes while I cooked dinner. After dinner we worked on his spelling words. For like HOURS. Who knew that shadow and window were so hard to remember to spell?

We ended the night with him reading the first chapter of his book.

I'm trying really hard to help him with his school work since he hasn't been doing very well lately. I got so spoiled with the girls that just did it and got straight A's all on their own!Pin It
Posted by Julie H at 8:18 AM

I have the same problem with Giffin.. to get jeans to his his butt they have to be grown up sizes and I have to hem them. Grrrr, I hate hemming.
Trevor looks lovely fishing!

I need to have more dates with my little guy. He's so sweet when he's away from his sister. He also needs some help with his school work, whereas his sister is more motivated.