My kitchen kind of smells like ass right now. I'm pretty sure this is where the smell is coming from. 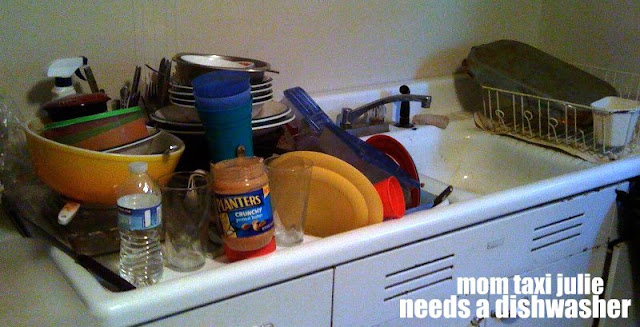 I was having a little mom-tantrum. That was my way of showing that I'm SICK of doing the dishes.

The other day I did dishes THREE TIMES. Yes I know there are three meals in the day but that's a lot of dishpan hands. The next day I did them again after breakfast.

That night I made dinner and somehow ended up getting up from the table before everyone else. Over an hour later I looked over and the food was still sitting on the table even though everyone had got up.

And then? I got mad. WHY does no one else offer to help out? Should I really have to ask other people in this house to help me? Shouldn't they be able to see that there are NO CLEAN PLATES and wash one (or ten).

I think someone might have noticed a bit since he put away the stuff that was clean in the dish drainer. (I just washed the pan that is there to make dinner in)

I remember when I was a teenager(ish) age and there being a woman on the news who was on strike. She put up a tent in the yard and refused to come back in the house until the family cleaned it. I remember thinking that that was really dumb. But now? I think it's genius.

Although I think it would be better to do it in the time of year with optimal weather.

And maybe instead of a tent I'll just go stay at at a hotel. One with a pool and cable tv (and I'd actually get to hold the remote!)  I could refuse to come home unless the house was clean and the laundry was done and put away and the toilet was washed and the dishes were clean.

Hmmm I'm kind of liking the sound of this. Who's up for a momcation???Pin It
Posted by Julie H at 5:26 PM

Um, I feel the same way right now. I am currently boycotting everything except for the bathroom because that's something my OCD just can't let slide. Good lord no.

I am right there with you!!! Although, admittedly my boys are still too little to do everything I wish I had help with....can I take a momcation anyway??? I kinda just want to pee without someone knocking on the door and yelling at me.

I'm pretty convinced that both our shower floor and toilet would be black if I never cleaned it. It can get pretty gross before I get around to cleaning either and I'm pretty sure my husband could care less.

And wait a minute - do you not have a dishwasher? I'm pretty sure that I could not live without one.

I feel sad for you.
Stew ALWAYS does the dishes after dinner.
We do have a dishwasher, but sometimes I think you end up doing more work just getting them rinsed and IN the darn dishwasher than if you just washed and dried them by hand!
I actually WASHED the dishes by hand last night and ENJOYED IT!
I know... I'm nuts.

I say yes... got to a motel! Leave clear instructions on what you expect to be done and don't come back till they are done!