The Color of Heaven Series

I've been so lazy all weekend! It's awesome. We hardly ever have time where there is nothing going on. Today I have book club at 2 but that is the only plans for the whole weekend.

Friday after work I decided that I should PROBABLY read my book club book and then I read that and the next two books in the series yesterday. The next book in the series comes out in 2014 I guess. They are only loosely related to each other but I think the author is a great story teller! They aren't real long books but they are so good! 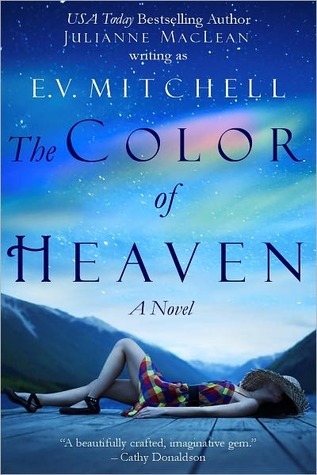 So the book club book is The Color of Heaven. I did a little sigh when I first started it because it lets you know right away that there is going to be a death in there. You just don't know what it is. I really could not put it down until I finished it, it was that good.

I'm hoping all my book club peeps actually read it so we can get a goo discussion going on it.

Next up is The Color of Destiny

I started this book right after finishing the first book in the series. I liked how the author tied in the first book but let this one also stand by itself.This book is about Kate, who is a paramedic. One of the paramedics that came to the rescue of Sophie from the last book. Kate has quite a story to tell about how she got to where she is. Young love, death and heartache. It's hard to talk about these books too much without giving things away.Also the book is about Ryan, who was a wild boy until a bad accident made him turn the corner and become a doctor. Kate and Ryan's lives eventually come together to find each other and much more.

And then The Color of Hope

This is the story of Diana and Nadia.Diana is the adopted daughter of a Senator. Nadia is the adopted daughter of a divorced maid. After several people tell Diana that they have seen her in more than one place at the same time she sends someone to investigate and finds out that it appears she has a twin!Can you imagine, thinking you are all alone in the world with no blood relatives and then you not only find out you have a sister but one that looks exactly like you.What comes next is a story of love, deception and healing.

The author says at the end of the book that she is working on another book to come out next year call The Color of a Dream  and that it continues on with Nadia.
Pin It
Posted by Julie H at 9:54 AM