Well last Wednesday was exciting. I got off work and just drove straight to the dentist. I got there a bit early and to my horror they actually called me right back. I was kind of hoping I could just sit there for awhile and decompress from the day and maybe they would forget about me and I wouldn't have to get five fillings.

Yes, five fillings. That's what you get when you don't go to the dentist much. Last time I went and got my root canal I was supposed to come back for more stuff to get done but I was like "nah, I'm good" after 6 hours of torture.

So two years later I dragged myself in there because I'm pretty sure your mouth isn't just supposed to have a dull ache all the time right?

She had them backwards a bit and I was like oh hell no, let's make sure you get that all figured out before you start sticking me with needles and grinding the wrong teeth.

The dentist came in and said some kind of combo that was also not correct and when I corrected him he said he was just making sure I was paying attention.

Not feeling me with a lot of confidence here!

Before they started the dentist asked me "so how did you do it?" I was like what? I only eat candy occasionally... I brush my teeth and floss...

But no he was asking me how I lost weight. I had forgot that when I first started going to that dentist they took a picture of me for my file. Apparently he had come across the picture which was taken in 2011.

I told him the usual, counting calories, running, lifting weights and riding my bike. I got the usual "I'm afraid to run because of my knees" from him, and the hygienist girl told me I looked like a swimmer. Hey maybe I don't hate the dentist office quite so much? 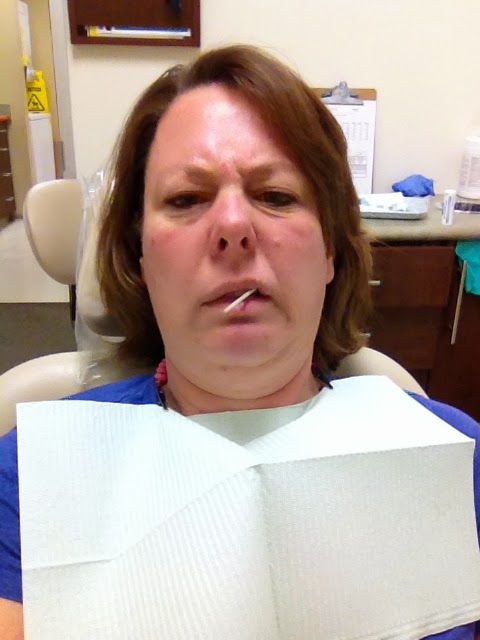 My face didn't become un-numb until about nine that night and I had had the work done around four.

What made it even better is that my husband is so not tuned into what's going on in my life that even though I had been texting him about maybe picking us up dinner, how I was about half way done, and general I'm going to die messages he didn't even realize that I had went to the dentist until hours later after he had been home.

Makes me wonder if I'm really just not that communicative or is he just really not paying attention?

I'm guessing it's more of the latter. Gee honey I don't know why I don't bother telling you any anything.

Five days later and my mouth is feeling a bit better but still a tiny bit of just aching. I'm really hoping that goes away and we don't have to go investigate that "little shadow" down somewhere near the bottom of my root canal tooth. Let's all pray.Pin It
Posted by Julie H at 11:08 AM

Labels: Dentist, I hate the dentist, my husband doesn't listen

Oh, girl! I feel you pain! Hate the dentist!! Even though he is the nicest guy!!!

So? how's ya teeth now? Any aching now?