Scott was so sick all last week. We had plans to go to Monterey for Saturday night for our anniversary and I kept debating on cancelling it. All the way up to Thursday. Finally he seemed well enough to at least sit in the hotel room and watch TV so I decided we’d just go. Worst case scenario we just relaxed in the hotel room or on the beach right?


We took our time getting ready to leave and finally pulled out around 11:30 or so. Of course we had to stop for gas, then to use the potty because I should have done that at the gas station and that big drink I got didn’t help matters, then we stopped at Casa De Fruta for a late lunch. It was kind of nice though just taking our time, not being in any hurry.

We had a nice lunch at “Casa de Restuarant”, so funny how all their little buildings there are named Casa de whatever (and there are a lot of them, it’s like a mini resort) and then it was onto the last stretch to our destination. 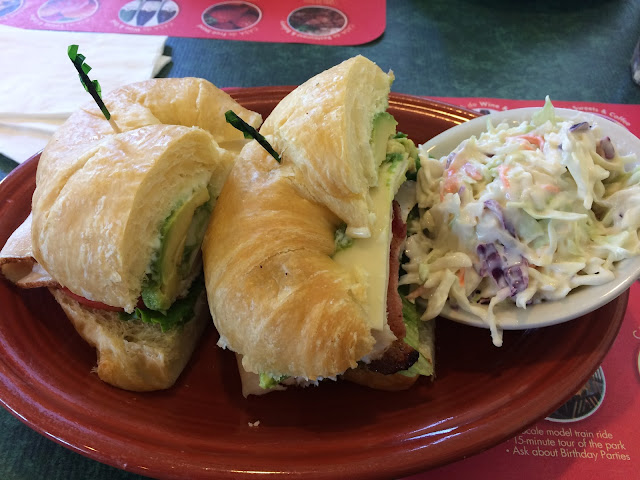 I booked us a room at the Howard Johnson in Marina again. We've stayed there two other times and it was pretty nice. Clean and quiet and not too terribly expensive. This time it cost a bit more, probably because it’s June and all that. They had changed the flooring in the rooms to laminate flooring, which is probably a lot cleaner but weird.  The hotel was fine except for on Sunday morning when there was no hot water when I went to take a shower. That REALLY sucked. I’m not sure if I’ll go back there since after reading the reviews again the water thing seems to be an ongoing problem and the guy working the counter when I went to check out and told him about it was like “I don’t know what to tell you”. Yeah, great customer service.
So back to the trip, after we got there we just hung out in the room for a while and watched some TV and then we were talking about cheesecake. I just typed in cheesecake into Yelp and found there is a whole little store that just sells little cheesecakes right down the street. How fun is that? So we went down there and got 12 little cheesecakes for $20. Of course we didn’t eat them all but it was fun having a bite here and there of them. The plain base ones weren’t all that great but I really liked the flavored ones. I had a key lime one that was really good, and of course anything Oreo is going to be great right? 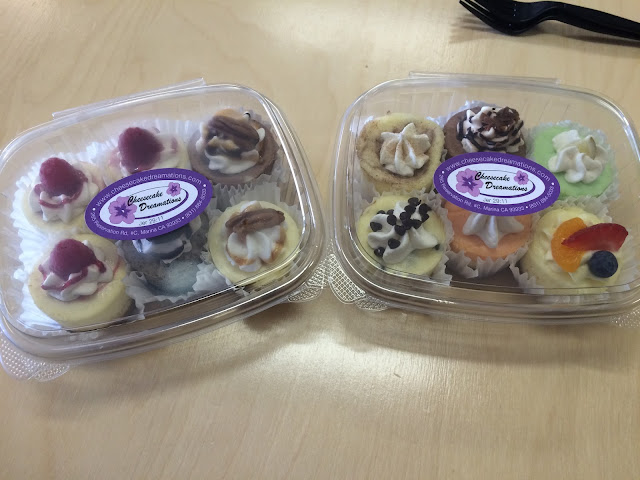 We watched a bit more TV and then we dragged ourselves away from Walk The Line (love that movie) to go watch the sunset on the beach. There was this big layer of fog hanging over the bay so we weren’t sure on how much of a sunset we were going to get but it turned out ok.  While we were sitting there watching we noticed these pelicans that kept dive bombing into the water. They’d float a bit and then fly off and then dive back down. They were fun to watch.  We got up and left before the sun was all the way down since it was a little cold. 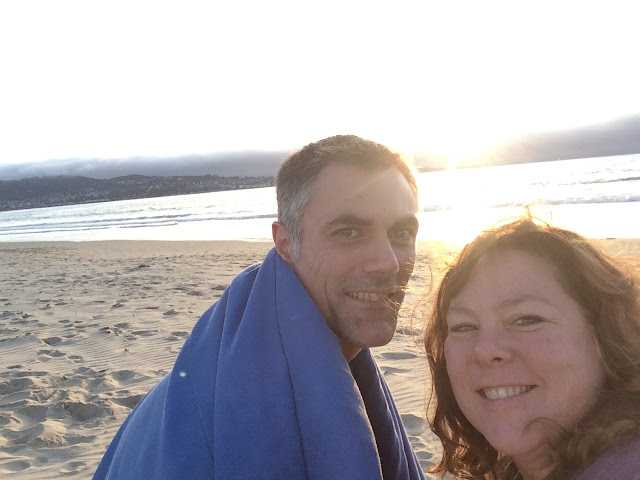 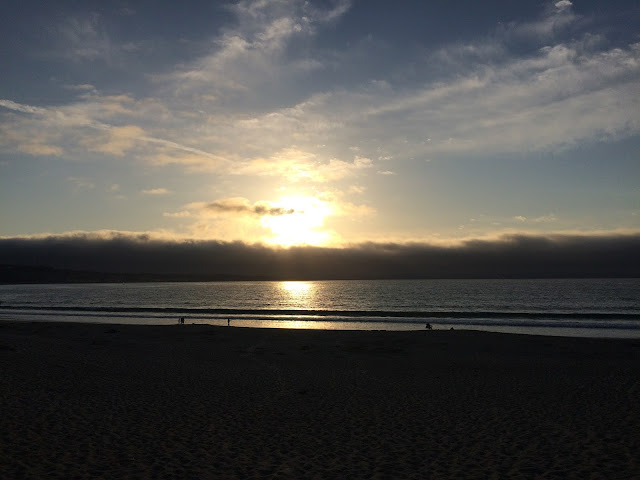 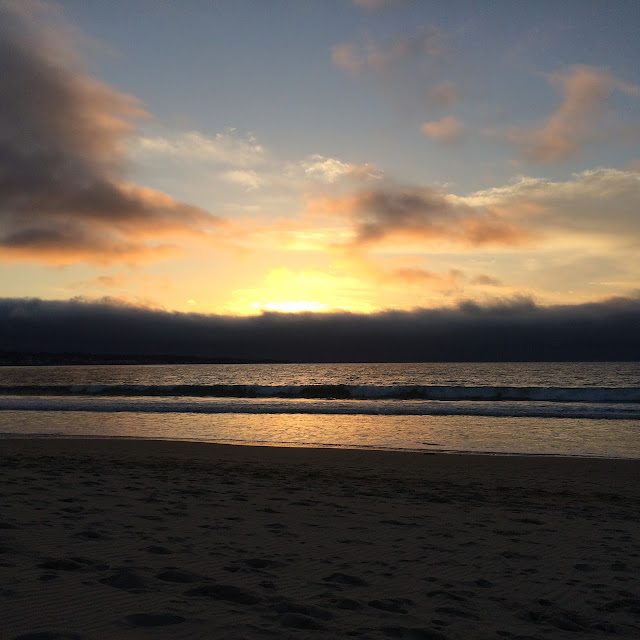 We decided to go find something to eat for dinner (no dessert needed lol) and ended up going to Fisherman’s Wharf. We settled on Nico's Wharfside because they had a fish and chips special, and then proceeded to order something else haha. They did have a margarita for their happy hour so that was nice. We settled on having a clam chowder bread bowl and the little fried platter (it had another name but I can’t remember) and fries to share. The soup was pretty good but the rest wasn't anything special. We did a slow walk back down Fisherman’s Wharf after dinner and then went back to the hotel. 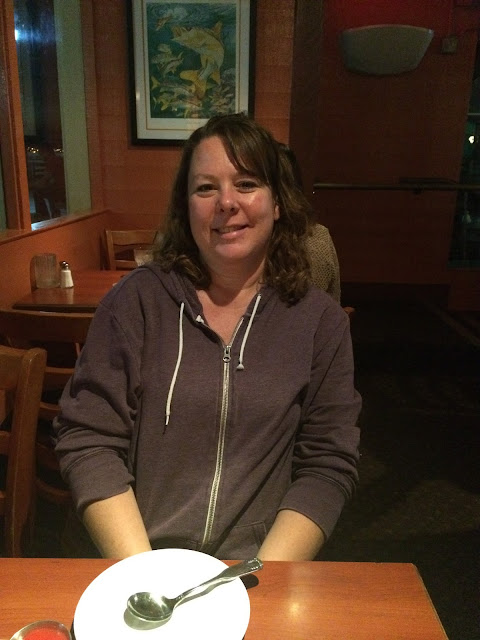 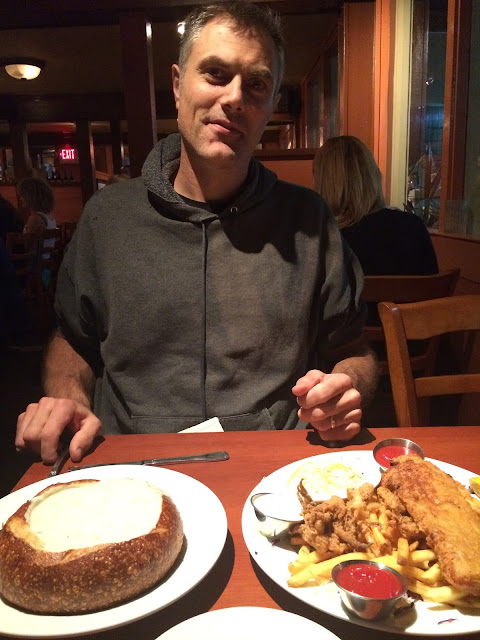 Sunday morning we got up and went over to the free breakfast in the hotel. It was PACKED. I was getting really annoyed at the people that were just standing still at the counter and hogging up the whole space. Common courtesy people, get the hell out of the way!
I ended up having a bagel and then grabbing a banana and a granola bar to take with me for later. We went back to the room and hung out until it was time to check out and then loaded up the car and went to Pacific Grove to check out the shops there. There were quite a few cute antique shops there. What’s funny is that while we were in one of them Scott saw my cousin Mike and his wife. How funny is that? They live the next town over from us but we run into them in Pacific Grove of all places.


We walked through a bunch of shops and then ended up walking down to the coast line. There are some funky older hotels down there that I think we might try next time we go. They are right across from the beach and not much more expensive than anything else. Originally we were going to take our bikes on this trip and go bike riding on the trail and that place is perfect since you can just walk across the street and get on it. 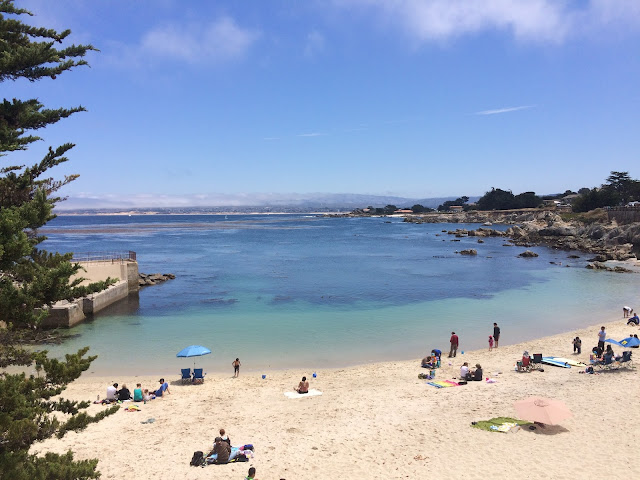 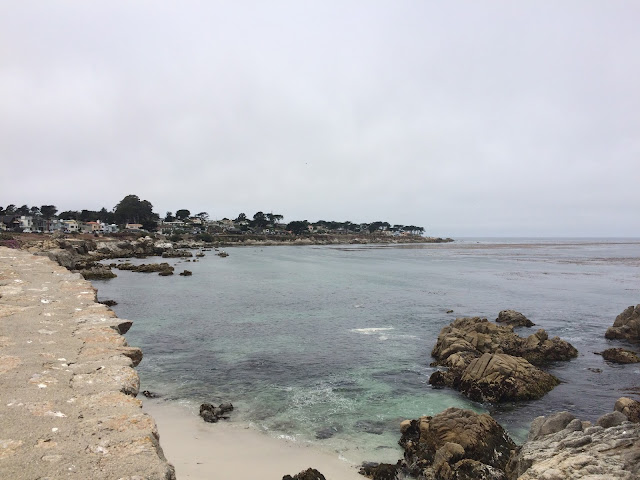 Eventually we walked back to the car and then decided we’d go to El Torito’s for lunch on Cannery Row. Except when we got there they were still serving their Sunday Brunch. We didn't want brunch since it was like 1:30 so we walked down the street and ended up at Cooper’s Pub . It was a nice little place and wasn't crowded at all, which is nice for Cannery Row. I think I drank about a gallon of water while we were there. Usually I pack a case of water in the car when we go somewhere but I didn't this time and boy did I regret that! 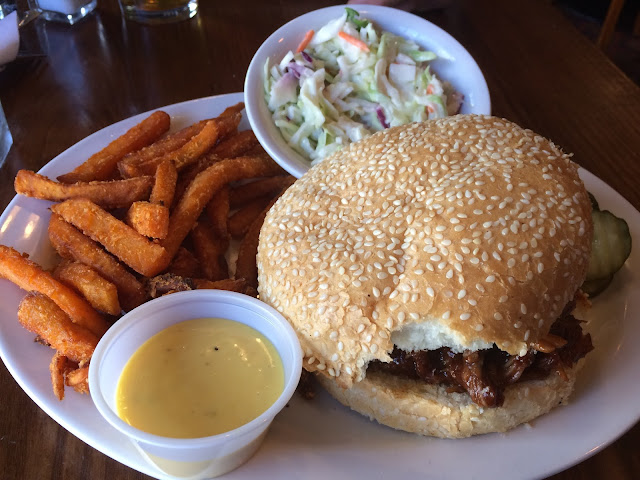 We walked up and down Cannery Row after lunch although we didn't go in any of the shops. I've been there so many times and they are all the same, all the souvenir crap. We were looking for this fun antique store that we usually go to but it was now a clothing store. Scott was looking things up on his phone and noticed an antique mall one street over so we walked over there. It was a HUGE two story building just filled with antique booths. I think we spent at least an hour or more in there. I love stores like that! I’m kind of kicking myself for not buying the antique croquet set that they had there. I've been wanting one of those and it was so cute on its little organized cart.


After all that walking around we were pretty much exhausted. We stopped at McDonald’s to use the bathroom and for a drink (and a sundae!) on the way out and then I drove us home.


Short and sweet little anniversary get away!
Pin It
Posted by Julie H at 5:45 PM

Sounds wonderful. How many years?

How lovely, lucky you for getting away for it too. HAPPY ANNIVERSARY.. a bit late lol.