Jessica's Visit Day 1, When you come home but your luggage doesn't 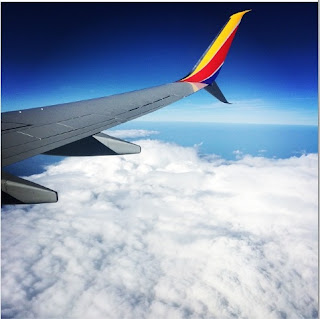 Our computer is down at work. No internet=no phones, scanner, fax, email=nothing to work on since my desk is already clean and I don't have any filing to do. I was already going to leave early today since I have a doctor's appointment later so I just left a little earlier.

AND no one is home except the animals because my mom took my kids to the movies today!

Except for the dogs chasing the cat and barking.

So way back on the night of the 11th we drove to Oakland to pick up Jessica at the airport! She was finally able to come out for a visit. She has not been home since the day she left, May 20, 2014. That's a really long time. Melissa and I went out to see her last October but she had not seen any one else in the family since she left.

On the way over there Scott was driving and half way through he started complaining about his back hurting. Which of course made me all stressed out because there is nothing worse than Scott moaning and complaining AND driving all at once. I was so happy once we could sit in the "park and call" area for a few minutes.

Her plane had landed and she just needed to go to the bathroom and get her luggage so we waited a bit and then drove over to the pick up area. She wasn't out yet so I told Scott to just let me out and I'd go in and find her by the baggage claim. Melissa jumped out with me and we went inside to look for her. After a minute or two we found her and waited for her luggage to come out with her. Only it never did. Of course she was totally upset and freaked out that they lost all her clothes. We walked over to the attendant who sent her inside to the little office area. The office area woman brought her back outside and had the attendant do the report for missing luggage. Neither of those people were the least bit nice and/or friendly. I guess that service with a smile doesn't apply to Southwest in Oakland, after 10pm.

Eventually she got her report filed and I sent Scott a message to come back around and pick us up. Jess was all upset because of her luggage and then Scott was still moaning about his back so that was a fun ride until he would FINALLY pull over so I could drive.

On the way home we stopped at Jack In The Box so Jess could get a snack and they don't have Jack In The Box where she lives. Then it was home to hang out for a little bit and then we all went to bed!

Damn... I hope her luggage turned up? Not a nice way to start a holiday home.

Losing ones luggage is so stressful but working at the lost luggage counter is just as bad. Everyone screams at you and is so mean. I think they grow a tough skin and are just get mean and ugly over time. Not that it's right. I worked in there for 1 day and I cried. People threw things at me and all kinds of ugly shit. So when I lost my luggage I was so nice to the woman even though she was a wench! :-)