I didn't do anything exciting last night or all day today but play games on my phone at work lol. I swear it's so slow at work now that there are three of us doing my job. Freaking ridiculous (yes I've complained).

Here is last night's dinner, Fajita chicken wings. I so need to buy some vegetables. I was going to go to the store after work but just kind of went meh. I'll go later lol. 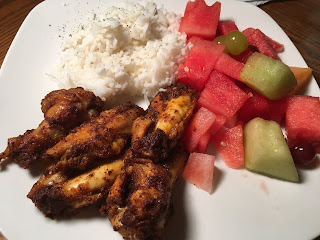 I'm going to go back to June 6th! Our 25th anniversary! We started the day by going to a shoe store to get Scott new shoes then we were on the road! We stopped and got gas at a Costco along the way (this is important for later) and then stopped at our favorite halfway to Monterey place, Casa De Fruta.  Be ready for lots of food pics because that's apparently most of what we do when we go on vacation. 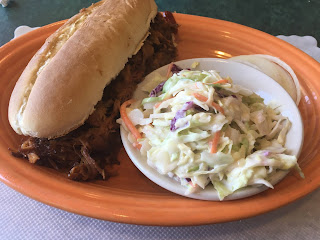 We booked a nice place in Pacific Grove, called the Rosedale Inn. Although it could do with a little bit of an upgrade in the living room area. I know for a fact that that fan is from the 90's since I have 2 matching ones in my living room lol. This place was so cute it was like a little cabin apartment. This is the "King Suite". 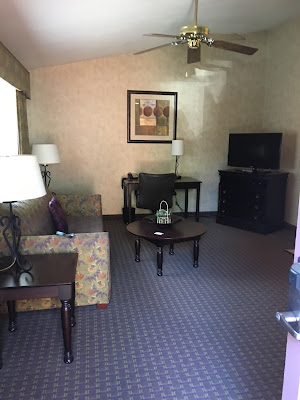 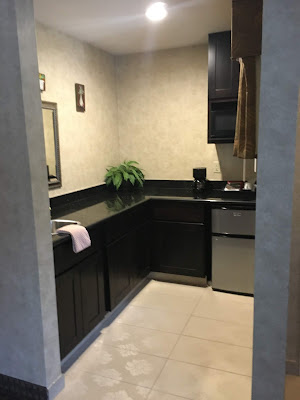 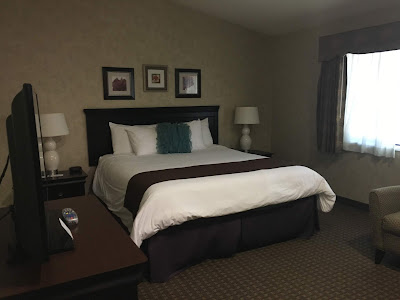 Behind the door is a jacuzzi bathtub that needed a visit from Peggy's Rick to refinish ita bit, but was still fun :) 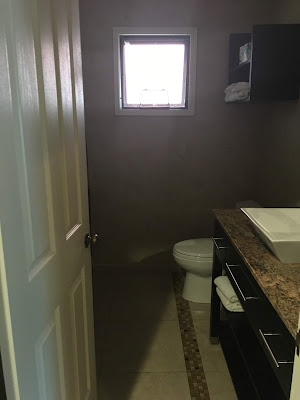 We hung out for a little bit when we got there then went in search of a bar that wasn't too far away. We ended up at the Monarch Pub and Grill where we had a couple drinks to celebrate not killing each other in 25 years and ate some fried mushrooms. 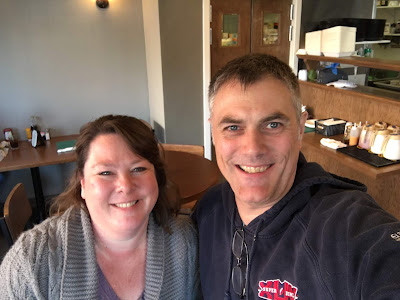 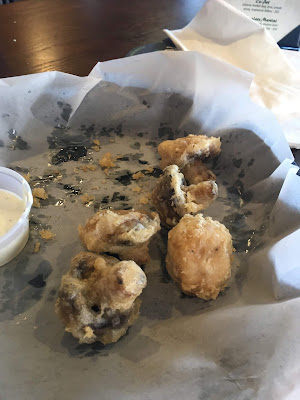 Then we went for a walk down to the bay to try and watch the sunset.  We saw so many HUGE succulents while we were on vacation. I really wanted to take some leaves home but I was with Scott and I knew he'd give me shit and think we would get arrested. He's such a rules guy! 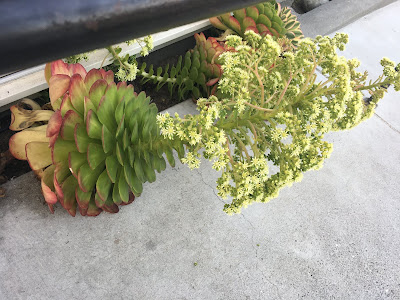 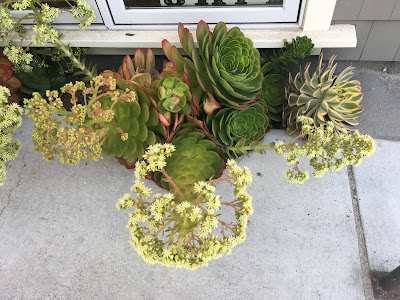 We walked down to the water area and checked out all the houses. 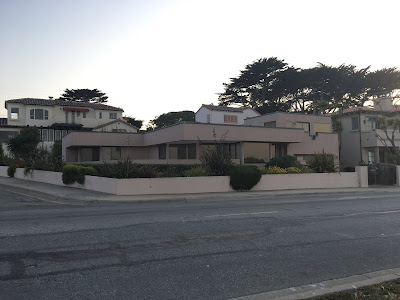 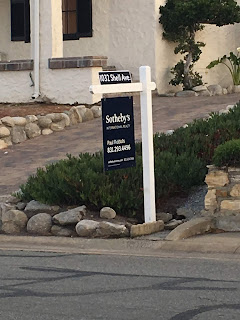 We ended up walking a lot more than we had planned because the sun was setting around the bend so to speak. 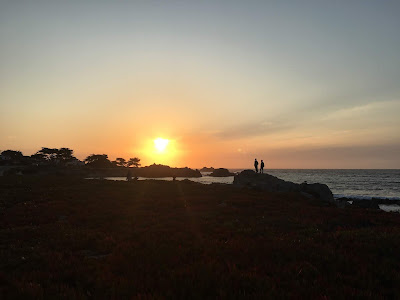 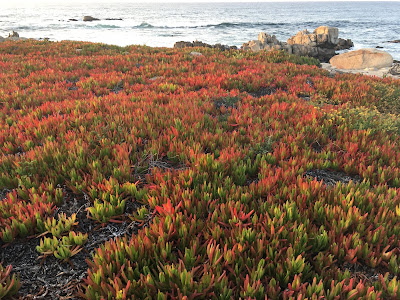 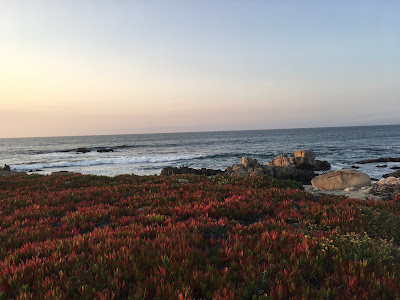 There was otters out in the water. I wish I would have had some binoculars. 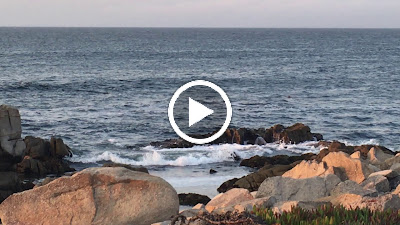 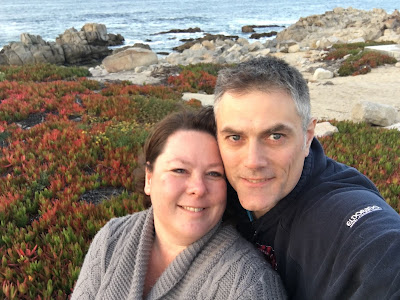 When we were walking back I tripped and fell. AWESOME. I'm officially an old lady falling down. I caught myself with my hands so that was good but my shoulders got a bit jarred. That totally felt great for the next couple days. It took me awhile to realize why I was hurting.

Also on the way back, random deer walking around. 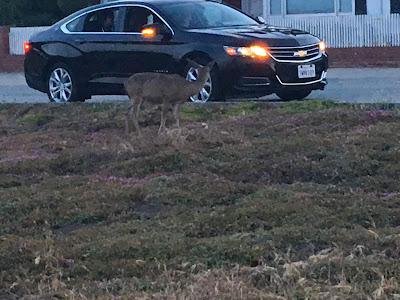 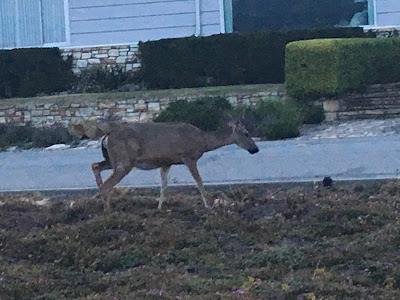 dooo dee doo just walking over to my friends house no big deal.. 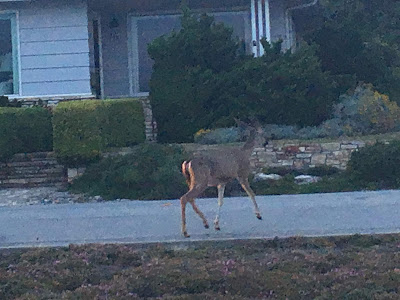 We walked a million steps and worked up an appetite for actual dinner (this is like hours after the mushrooms lol) We went down to Cooper's Pub on Cannery Row where we had the most nervous young waiter ever lol. We didn't realize they were going to be closing when we got there so we were like make sure it's ok with the cooks if we order!

The customary fish and chips 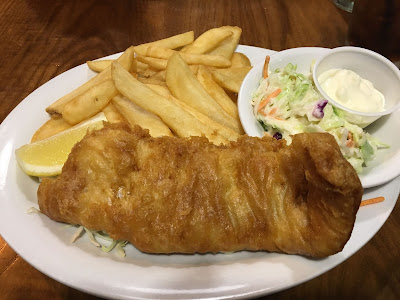 We went back to the room after and drank our Casa De Fruta Pomegranate wine and enjoyed our nice hotel!

Holy shit balls... that house is expensive! And here in New Zealand I wouldn't be caught DEAD buying a plaster house ever again! The leak if not built 100% properly. IN the 90's hundreds if not thousands of houses were built using shonky wood and plaster systems and are all rotting now! So sad. We were so lucky our plaster house in Auckland was OK, THOUGH it did take us 11 months to sell it due to all the bad publicity over plaster houses. I love all the food photos, even though they make me hungry. We share the same Wedding Anniversary, but I'm sure we already know this! Stew and I celebrated 31 years this June. How's your young man? He must be getting really big now, our Griffin sure is. He's now 6 foot 3 and in size 15 shoes.

Oh I forgot to say, I WOULD have taken some succulent cuttings!

lol I wanted to!

We haven't measured him lately but he's definitely over 6' now. TG his feet aren't that big yet lol

I definitely would have snagged a few succulents when Scott was not looking - those are beautiful and so healthy looking!

I love Zillow!!! I used that everywhere I traveled to price the houses on water!!! Crazy expensive!!! I love that home and only 2 million-that's nothing!!! LOL!!
It is so nice that you took a trip to celebrate all your years together! Cant wait to read the rest!
Hugs!

okay for size and location it is a 2mil house. We have 2mil here with no ocean and not near the size. So I get it. But wish I could afford it!!!!!! Next life.
Zillow is never accurate though, close but not accurate.
It shows all kinds of info about my house that is incorrect.