Always doing what I said I wouldn't

So I know I said I wasn't going to do any more crafts hows until it cooled down and closer to Christmas but I can't pass up a free opportunity haha. The gal that runs the Handcrafter's Boutique posted that this guy was looking for some more people for his little art show tomorrow in front of a coffee shop so I emailed him. I was like not sure if what I make would meet your qualifications but it goes with coffee lol. He said it's a free space and in the shade. I didn't have any other plans for tomorrow other than maybe sewing or going through more stuff to sell so I'm going to go. I went and met up with him after work so he could show me where they are setting up. Looks like it will be a nice chill (but probably too hot outside) environment. I think it's just going to be the artist guy, his brother, me and some other guy. 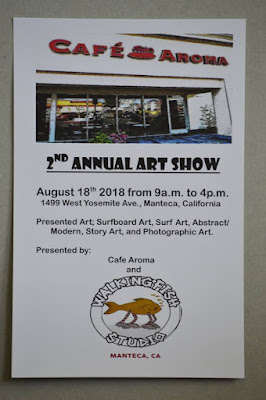 Currently I'm waiting to take Trevor to the high school football game and he might go to the dance after. All you have to do is add "girlfriend" to any event and he's game haha. His GF has super strict parents apparently so he has to take any time he can get. I hope he has fun.

Scott and I are going to go to sushi while he's there. I totally forgot to buy cat food on the way home so I need to make sure and do that while I'm in town or I'm going to have some really pissed off cats. They already weren't too happy with me. Usually I have a couple cans of tuna around that work in an emergency but there wasn't any of that this morning either. I gave them a little milk and they thought that was ok.

I am also looking online for where I got the little flower border I used for my price signs. It's saved on my dead computer but I got it online somewhere.. I wanted to update a few signs since my last show was slow so I marked some stuff down. Also I usually mark down my keyfobs when I don't have very many character ones and I made up a bunch of new ones since the last show.

Oh I almost forgot one more fun thing from today. We have a room in the back that we have all nick named "the cave" because it has no windows and only one door. It's really supposed to be a storage room I think but they put cubes and a lot of people in it. I used to sit back there for years and I was sick a lot when I did. Very poor air circulation. Anyhow, someone finally decided that it's not safe. DUH! I've been saying I think it's against fire code  & OSHA for years.  So today I had to help my boss order some new cubes. They are going to swap 2 rooms (if they can get the electrical worked out) so they are more in a hallway type room instead of a storage room. We'll see how it goes!

Well hope you all have a great weekend and hopefully I make few dollars tomorrow and don't die of heat stroke. It's supposed to be 99 tomorrow. Good thing that coffee shop sells smoothies.

Julie
You could have shared your sushi with your cats.