Well today has got off to an early start. Scott's sister called at 3:30 because his mom was throwing up blood. We called 911 and then went to town. By the time we got there they were already gone with her. We stayed with his sister for a few hours until the hospital called. They said she will be admitted so nothing we can do now. I think there needs to be some discussion if they release her to maybe go to a care home or to have hospice come in. His poor sister is exhausted and Scott can only do so much for her.

Wednesday after work I drove up to Jessica's place and spent the night and then yesterday morning we got all their stuff loaded and moved to my mom's cabin. I was praying the whole time that her boyfriend's car was going to make and and whew it did.  The trailer they were living in was in the full sun and would have been so hot in the summer. Since he got laid off and she wasn't working either there was no point in being up there since they both hated it and it was three hours from all the families.

I got a few masked made last night. I'm just about out of usable elastic. I have some that is supposed to show up on Saturday so I might have to get all the orders (got a ton more) done up to the elastic part. I ordered from someone on April 4th (a different order) and they finally made a shipping label yesterday. Hopefully it actually gets in the mail today. The gal was like oh I have a lot more coming in and I'm like well it took me forever to get this order I don't think I'll order again sheesh. 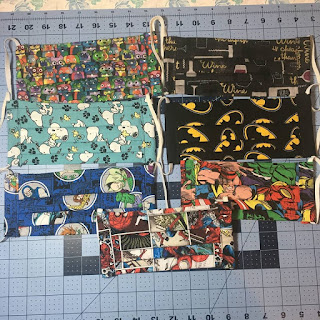 I'm making my way through my fabrics, soon I'll be out of all the super heros I think. I was able to condence 2 boxes of fabric last night so that is good. I really had too much stuff anyways. I have a bunch of prints in the dryer right now for the next round.

Well, we will see what the rest of today brings. I guess I won't be starting work late today haha. I still have 45 minutes before I start. Scott just went to work too since there is nothing we can do for his mom and can't be with her. So weird how things are now. Just have to drop off your loved one with no advocate and hope they take care of them. They'd probably kill Scott if I had to do that with him.