It seems odd that I'm still looking forward to the weekend when I haven't went anywhere.

Look at these adorable pancakes Trevor made me yesterday. 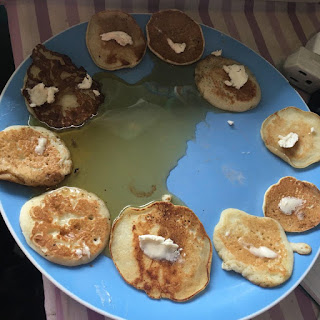 Last night we had a birthday dinner for Melissa. She requested this chicken potato bake and cupcakes.

I was missing a couple ingredients so I asked my friends/neighbors on facebook if anyone was going to the store? Someone was and she got me all the stuff I needed PLUS bonus TP since I'm always saying I'll trade TP for face masks lol. 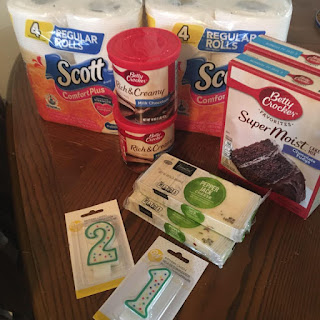 I made her her own little mini cake for the candles. I'm liking this idea and think we'll do all the cakes this way 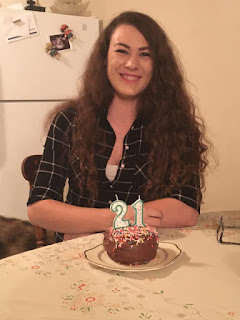 Today is her boyfriend's birthday, how funny is that? He is 24 today. They were going to go to Disneyland next week or the week after for their birthdays She saved up the money for months. Total bummer.

Yesterday we had our first "staff meeting" with the teams program on the computer. Five minutes before I realized it was a video thing. Uhhh nooo!!! But then I figured out how to turn the camera off. Thank God for that haha.

This morning I tried out the Instacart App. I may never leave the house again. Groceries delivered to my house out in the country? I'd pay extra for that any day. I hate going to the grocery store. Sadly the store I usually shop at isn't on there (Winco) but Food Maxx is on there and they aren't that much more expensive. I did one shop there and a few things from Costco for a treat. Now I'm going to do an order from this local produce guy that does deals and delivers too! It's a win win.

I've still been having sales on Etsy and the occasional Ebay. I had put my extra thread on there and that's been selling the last couple days. Yesterday I sold a quilt block pattern that came with the fabric that I've had for a really long time. Nice to get some of that old stuff out! After I get my friends caught up on masks I'll have to work on listing some more stuff. I still have a little "death pile" as they call it. Plus fabric for days that I can put on there too if I run out of other things.

Oh and almost forgot today they have "packet pick up" for the high school. They have stuff online too but Trevor said it might be nice to have the paper version. I'm going to send him to go get it if he wants it. Nice he can drive himself.

Alrightly! Have a good day everyone!