Mother In Law Update & Catch Up

Good morning! Happy Tuesday! The sun is out and shining on me through the window. Probably in about two hours it will be hot and we'll have to turn on the air conditioner. Yes we are already racking up the PG & E bill here. 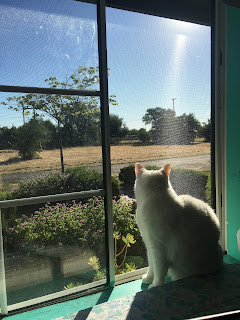 Scott's mom came home from the hospital day before yesterday. Turns out she had a bleeding ulcer which they were able to fix up and now she's on her 8th life or something. Her and Buster just keep ticking. I thought she'd really lost her marbles when we were driving home from the hospital. She was telling us how that man said she was poisoned. We were like ? are you talking about? She said that man! That man from the Federal Government! He called her and told her she had been poisoned by Bayer Asprin!!

Omg lol. So I think she got one of those class action lawsuit phone calls or something and while she was at the hospital they had told her to stop taking the baby asprin because it could have contributed to her getting the ulcer (doubt it). Thinking she combined those two things and that's what she came up with in her head.

Try explaining scam calls to a 90 year old. I'm almost wondering if she heard it on a commercial or something since she hardly ever answers the phone. Anyhow, she was happy to be home and we got a bit of a talking to about how we wouldn't want to go in a home when it was our turn. We never said anything about that to her but she said they were trying to talk to her into going to one in the hospital (probably not).

Yesterday someone called about physical therapy for her. Not sure how my phone number got in the mix but apparently I'm the only one who answered. Someone is supposed to call today to set up a time. I figure I'll run to town when they are coming so I'm there while they are there since everyone is paranoid that someone is going to steal something or whatever. Someone might want that cigarette smoke smelling pile of clothes from 1970 for sure.

ETA they just called so I guess I'm going to town sooner than later.

On the home from I'm still making masks and selling A LOT of stuff on Etsy. Kind of crazy. I think my store must have got bumped up in the algorythm or something. I mailed out about 20 items from the weekend and this morning I woke up to someone buying 8 items. Works for me!  I have tons more stuff to list but I've been busy making masks still.

Last night I was working on this pile of fabric I washed. I put them in mesh bags so that they don't get so wound up but one bag blew a hole in it and it became a mess. I got them untangled and was ironing and cutting some out. Ended up just ironing a bunch while I FaceTimed with my friend Traci last night.

Actually have real work to do the last two days so don't have time to work on it on the side til after work.  Currently I'm waiting for my map program to open up. For like 10 minutes. Shit takes forever.

Tomorrow is my Jessica's 26th Birthday. Last night she was making a surprise that I can finally share once she shares it haha.  She came over to work on her little project and made banana bread out of all our turning bananas.  Trying not to eat it all today!Pin It
Posted by Julie H at 8:38 AM