Good morning happy Wednesday! Nice I'm back to work today and the week is almost over haha.
Shlepped this box of stuff to be mailed out to my car this morning. Put the smaller envelopes in the outgoing mail by my house but will have to take the bigger stuff to the post office today. I had 4 more to go out but I was out of the flat rate padded envelopes. The ones I ordered came yesterday but I had them delivered to my work so I wouldn't have to drive to town and pick them up at the postal annex (such a PITA). I just paid $400 more on my credit card. Down to $1200. Woot woot that will be gone in no time. Then I will be free of credit card debt (hopefully it will stay that way lol). 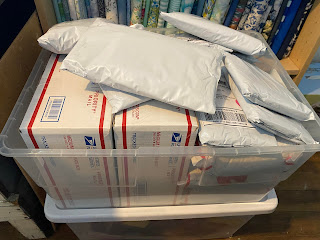 For the 4th of July we went to my brother Louie's house. It actually ended up being kind of hot while we were sitting outside on the covered patio. I think it was because there was no breeze. I put my feet in the water twice. Scott was laying on a floaty with his feet on the side of the pool and dozed off a bit. Then afterwards he was walking like a 90 year old saying his back hurt. So we didn't stay much longer than that. He hung out for a bit at home then went back to his mom's. The weekend date lol.
I missed being with my littles for the 4th. They went to their dad's side of the family. Lilly had a fashion show with all her little outfits. The one I bought was too big but it doesn't say the 4th on it so she can wear it later (just red, white and blue colors) 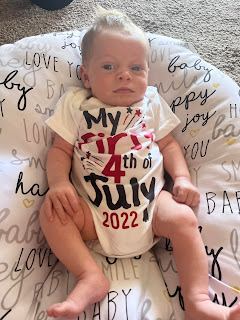 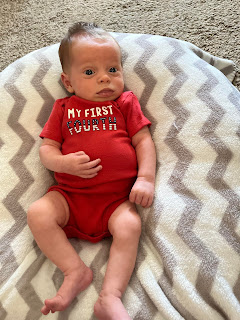 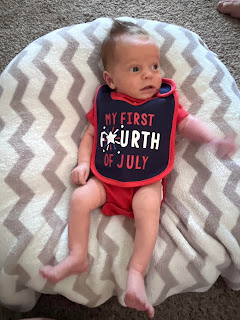 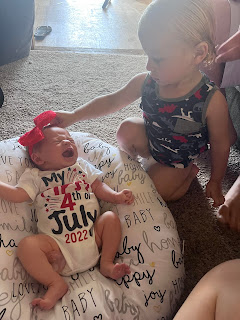 I didn't take very many pictures at my brother's house. Here is my mom and Stella. She is 4 months younger than Daniel (Little Joe's little sister).  Her mother is a hair dresser and did her hair.  She is so adorable and just bops around for the most part. 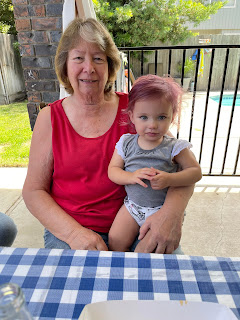 Other than the party I worked on my fabric sale stuff all weekend. I brought the last box into my sewing room and started going through it. A lot of small pieces again. Ironing, trimming, measuring and labeling. I can't believe that is the last box. I do have 2 boxes of solids and tiny scraps now plus the stuff I had previously put on the cards to store and now I'm like hmm might sell some of those too lol.
I took a peek at Marketplace to see if there was anyone off loading fabric on there yesterday since this is easy extra income. Tempted to start looking for that again to get my bills all paid off. Although I'm starting to want to put it away and sew some something but I'm motivated to get it done now.
My friend invited us over to go swim at her house tomorrow after work so that will be nice. Says a high of 87 but she has solar and heats her pool so we don't freeze to death haha.
Pin It
Posted by Julie H at 10:01 AM

oh can I come to the pool. We had your weather today - 100! I will not be going outside until fall. I am not used to this. Remind me in January how awful this was. LOL