Good morning happy Tuesday! If I wasn't able to work from home today I probably would have called out sick. The last few days have been pretty tiring!
Yesterday I watched the littles at my house while Jess went to work. Finally put the bassinet up and look who is already almost too big! She did take 2 naps in it though. 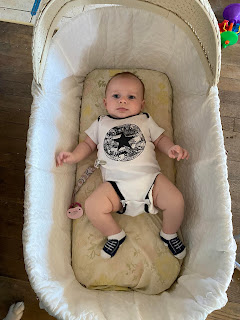 Simon LOVES the baby and thinks she is a popsicle. She just wanted to lick her ALL the time. One time after telling her no she talked back to me haha. 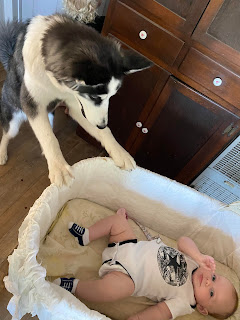 I thought the baby was going to be the more difficult one but Daniel was DONE with me after about 4 hours and then CRIED unconsolably for probably 2 hours with a 30 minute or so break when I gave him a bottle of milk (desperate times lol) and he passed out on me. 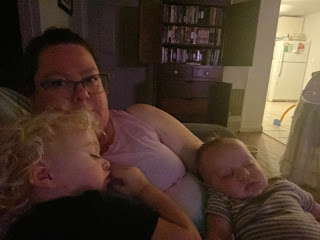 He woke up all sweaty and then went right back to crying. Jess said he's like that whenever he misses a nap so next time we'll just hang out at their house. Also won't have to worry about the dog helping that way lol.
This picture is in my FB Memories today. When we got our first dog Tobie. Seems like a life time ago now. Scott is so dang cute. He's sitting on the porch of the Poplar House where I had my first apartment. It was a big Victorian house that was split up. Getting the dog is what got us to move from there. I wish I would have stayed there longer but that is what got us eventually to where I am now. 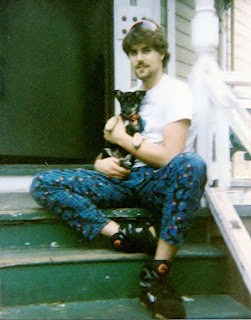 He's just a baby (both of them haha)
Yesterday I got my keychains and zip bags inventoried. Need to bring in the rest of my stuff still. Slow unpacking. I need to go get my tire fixed still too. Ugh more money spent.
Putting Scott's dental stuff on my Care Credit account made my credit score go down FOURTEEN points. Isn't that crazy? We'll have to get that paid off soon. I did have about 1/2 of the money for that in my healthcare spending account but a bunch of that got taken out for Trevor's doctor stuff. Still waiting to see what they are billing us so much out of pocket.
Work is deader than a door nail. I should have taken a week vacation. Remind me for next year ;) The whole system is down through Friday and then Monday is a holiday. Today we get a 2 hour early release to celebrate the end of the fiscal year or something. Whatever, I'll take it.
Pin It
Posted by Julie H at 9:22 AM