Good morning happy Thursday! I was running so late this morning, I had to go help at the AgVenture thing for work. I HATE going to this thing but I pretty much got told I had to go because they needed me to walk around with the stupid mascot thing. Nothing sounds more horrible than hanging out with 100's of 3rd graders. I got there and everyone was just standing around so I rushed for nothing. Then they only had 4 tables instead of 6 so they had plenty of people so I left lol. Back at the office now. Like 40 minutes of extra driving this morning but I'd take the driving for nothing over staying there.

Yesterday I went and got the two new tires for my car. I had done everything but pay over the phone (tried doing it online but it won't finish when I hit submit) so that was super easy. I walked around Home Depot while I waited and then went to this Sourdough place and had a cup of clam chowder (even though it was hot out) and a soda.

After that I went to Safeway to order Daniel a birthday cake. Got that done and admired all the super cute Halloween cakes they had in the case. The light reflected off the glass but I think you can still see them. 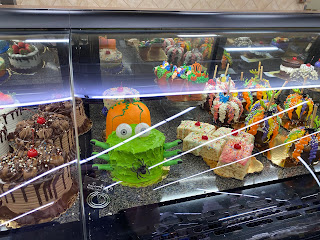 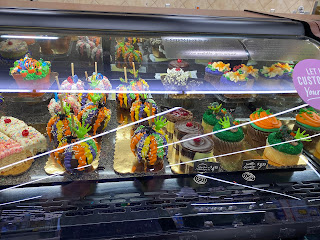 Picked up some dinner for Trevor and I and then went home to sew some more. I was like dang it we're out of dog food! I tried to get Trevor to go get it but he said he'd go if I went so we went together and got dog food and a few other things. He found this FBI vest for Simon and thought it was hilarious. Of course had to put her Doggles on so she looked cool. We bought her some hooves to chew on and OMG she loves it. Kept her busy forever. 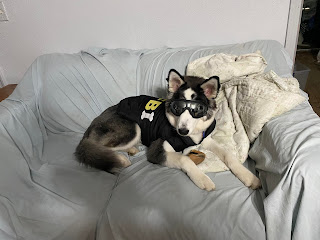 I have one more fabric I want to cut up and then I just need to do the linings and the batting for my piles. I dug through my partial projects box and pulled out some cat keychains that were started. I found some skull ones too so I pulled those out. 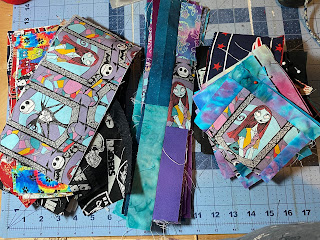 Probably won't get to that tonight though since I have darts.
I ordered some party supplies for Daniel's party off Amazon yesterday. They said they'd be delivered by Friday so lets all pray they actually do so I don't have to run out on Saturday and get stuff since I offered.
Pin It
Posted by Julie H at 9:52 AM