Saturday morning we finally got around to carving pumpkins. You can't carve them too early here because it's too warm and you'll have a moldy mess by the time Halloween rolls around. Usually I let the kids do it the day before but we were too busy and never got to it. So here they are in their jammies carving pumpkins. Jessica is absent since I wasn't allowed to take pictures of her with her bed head. 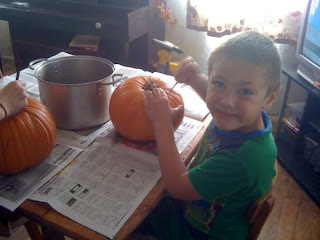 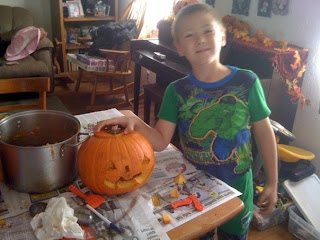 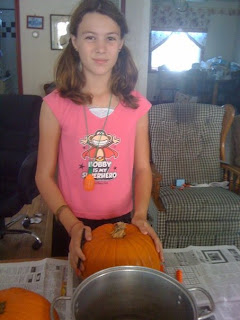 I ran to the store in the afternoon to get some candles for the pumpkins and went to Wal Mart. BAD IDEA. It was freaking crazy in there. You'd think they would schedule tons of employees to work on ANY holiday to help calm the caos. Apparently they didn't get that memo. 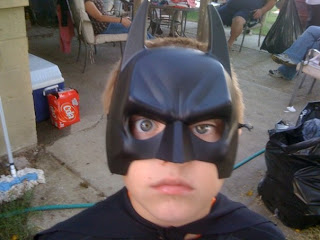 (doesn't my boy have some FIERCE eyes!)
I got home in time for the kids to want to go over to the neighbor's house to "work on the float" that we were going on again this year. You can read about our first experience on it last year here. 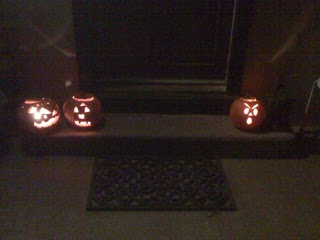 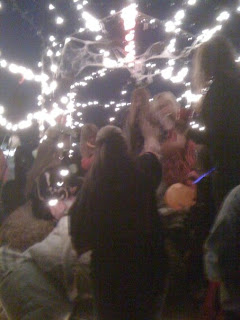 iT was a freaking BLAST. At one point there were 27 kids and 40 people total on or driving/tailing the float. When we got home Scott said that the only kids that came to the house were our huge group and like 1 more "wave". I only had 4 small bags of candy and there was still some left so not many kids.
Pin It
Posted by Julie H at 6:00 PM

The pumpkins look neat. I have never ever carved a pumpkin!