Catching Up & Working Out

Hello there peeps!! I'm way behind on my blogging! Here's a bit of a recap the last few days.

I ended up doing the last day of the couch to 5k week 7 on Thursday night.

I figured I should get it done so that Friday I didn't have to worry about it. My friend was having a party and I figured I better get it done way before that! Scott rode his bike with me and when I was done running the 25 minutes he says "so I'm guessing they think you are running a lot farther?" UM NO! I'm working my ass off just like I'm supposed to. Farther comes later!

Friday I went to work of course and it's FLEA MARKET FRIDAY!! They have a flea market down the street every Friday and I've been walking down there each week and getting 2 taco truck tacos and then walking around to check everything out. Delicious as usual, although I didn't find anything to buy. I came back to work all sweaty. Good thing I only had a couple more hours!

A couple hours later I was walking down to the little corner store where my friend was having her boyfriend's birthday party. Scott wasn't home yet and I figured if I walked down there he could meet me and drive me home. That way 1. I would get some exercise on my way and 2. Not have to worry about drinking and driving. My plan was foiled however when Scott rode up on his BICYCLE. People joked about him giving me a ride home on the handle bars. I opted for getting a ride from a friend!

So this little place only serves beer and wine. BOXED wine. I hate beer. So boxed wine is what I drank for awhile and then switched to drinking some Smirnoff Ice. Apparently that was a winning combo to get me to be all happy and ummm get a lot of embarrassing photos put up on Facebook! I'm so getting her back next time there is a party. I WILL be armed with my camera and make sure she is plenty drunk!

Flat Hair booo. Met that gal there, she's a HOOT! 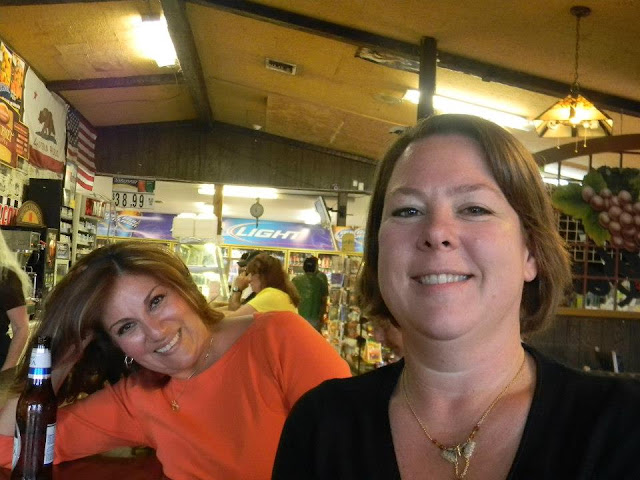 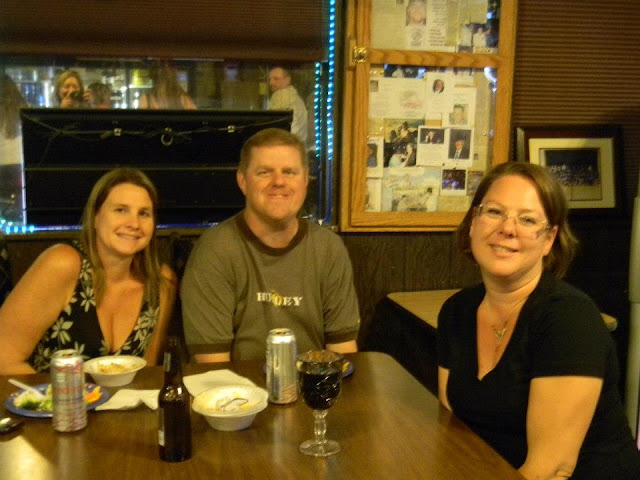 My buddy Lupe & I 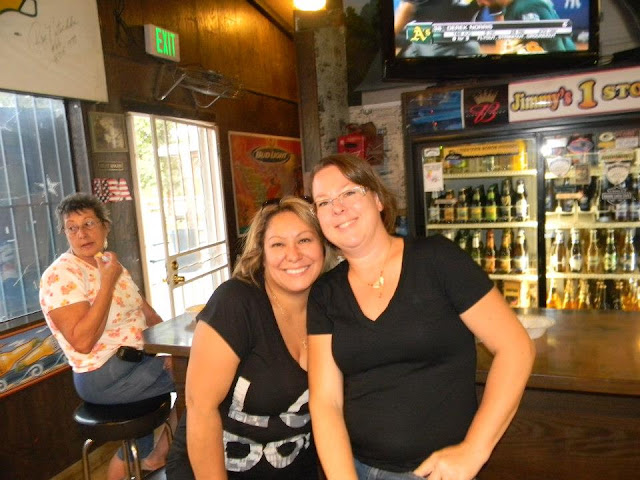 Scott and I were posing for a picture and the birthday boy jumped in at the last minute. Apparently I thought that was funny. (oh look not drinking wine anymore) 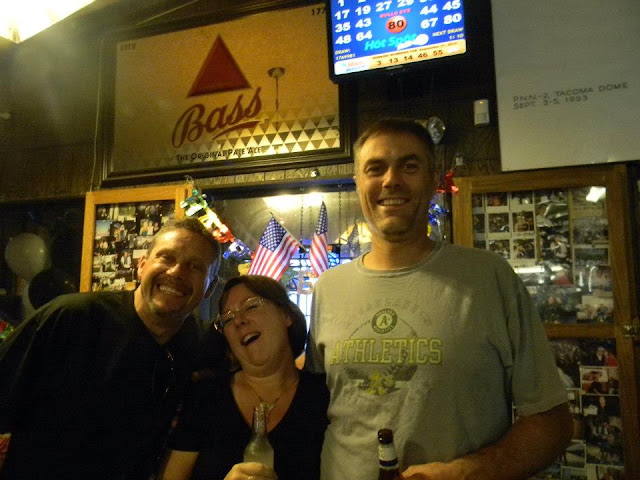 Ummm yeah. I'd say I was a bit tipsy at this point! 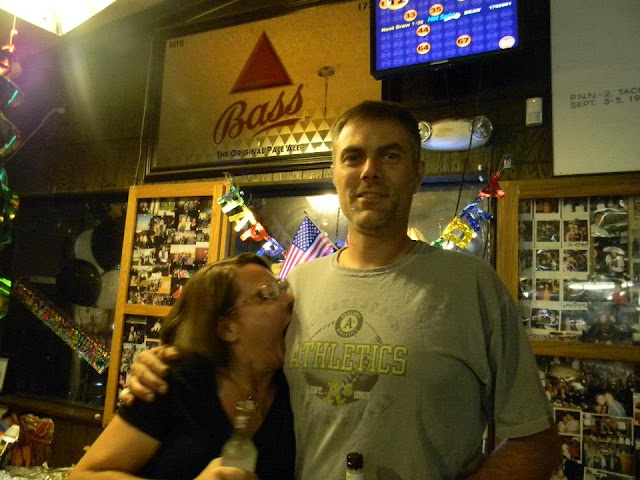 So that's about how the party went after that haha.Trevor was up the next morning at FIVE AM playing on the computer. I got up and took some Tylenol and went back to bed for a couple hours. I woke up with no hang over woot! Scott on the other hand slept most of the day so we didn't get to go on the bike trail ride I had planned on doing for the weekend.

I mopped the kitchen floor instead.

That night we went over to the neighbor's dock and sat and watched the sun go down and I got ate up by mosquitoes  Then we moved down the street and sat around a fire pit (and applied some bug spray) and ate warm apple crisp straight from the oven. Ummm so good.

Sunday I decided to do some weeding. I may have got a bit carried away. It was super humid and hot outside so after three hours I pretty much left it. I still need to go out and clean up a bit.

During the big horrible summer in which we had three car accidents and I worked full time my yard was totally neglected. I'm sorry yard. I promise to take better care of you... 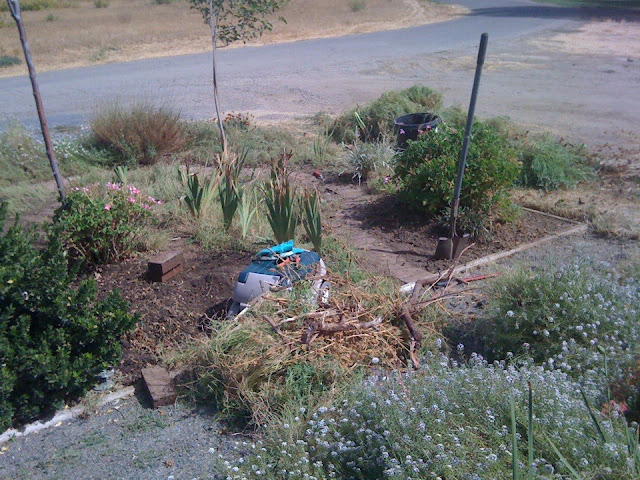 Sadly my big purple bush is now dead and gone.

After recovering from the yard work I walked down to our little baseball field. Scott is going to be on a beer league with the above birthday boy and some of my friend Lupe's family and some neighbors (out here family and neighbors is the same thing, everyone is related to someone). I sat on someone's tail gate and waited for my friend to show up. And waited. And waited. It was SO HOT. Finally she said she was almost there and I told her to stop and get us some adult beverages (gee maybe that's why I'm up a few pounds?) on the way in so we could cool down. 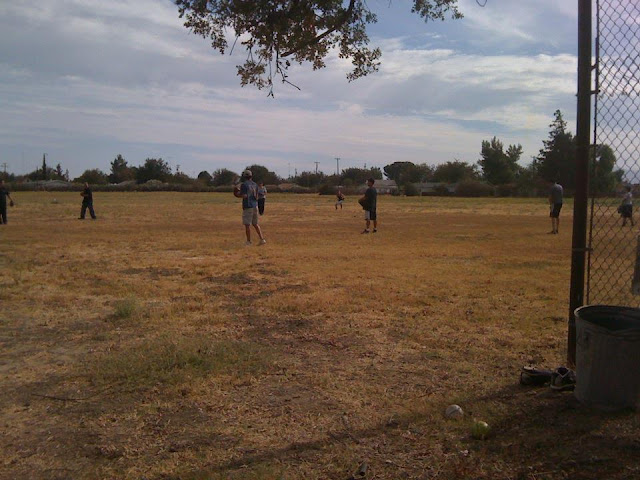 They have their first game tomorrow night (Wed) at TEN PM. I might not be able to stay up that late...

Monday morning I couldn't sleep so I got up and went out and ran my c25k week EIGHT (OMG WEEK EIGHT WEEK EIGHT!!) in the dark. (damn it was cold in the morning too!) I was back in the house, showered and ready for work by 6 am. I ran the whole 28 minutes. GO ME!! 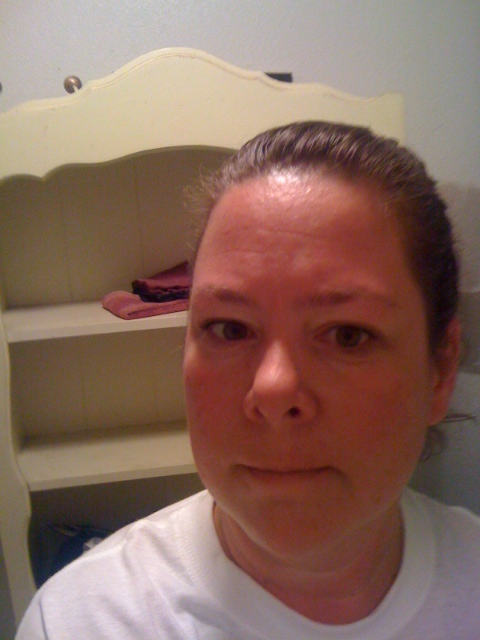 Today (Tuesday) I went to the trainer. It was pretty warm so I decided to just wear my new running top by itself. I went to pick up Trevor from band and I was thinking. Hmm maybe it's a little too much boobage to wear by itself?? I sent Scott a message asking if it was too much for the gym and all I got back was "nice boob shot!". Later he said he never even saw the question! 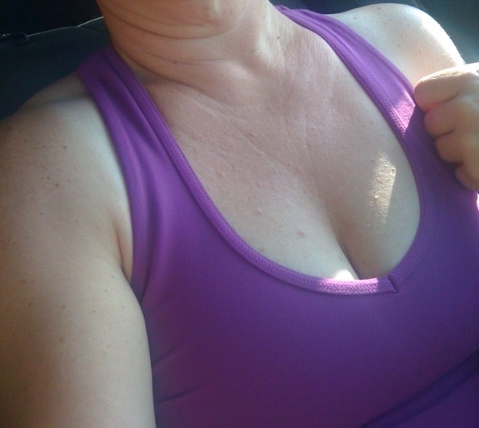 Trevor took his sweet time getting in the car so I decided to just go for it. I wish I would have worn a tank top though since I felt a bit self conscience the whole time I was there. 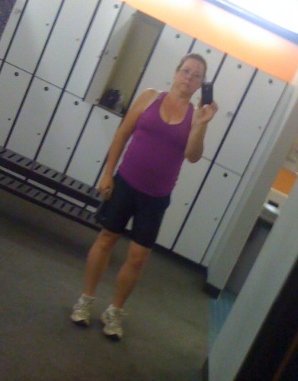 If I could just get rid of that GD belly I'd be so happy!! 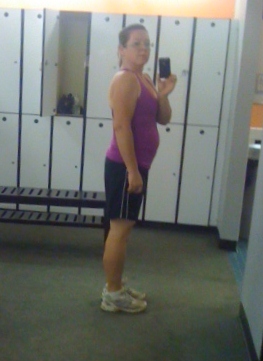 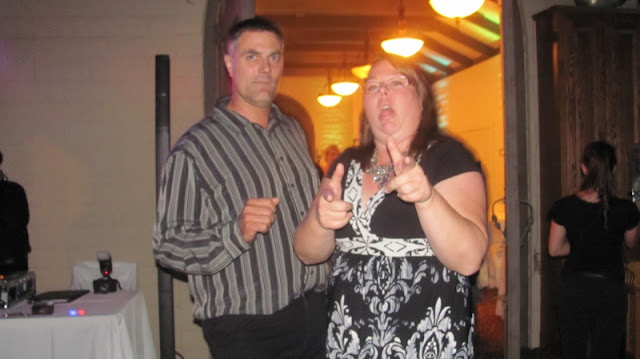 We did a circuit training today that included me sprinting outside behind the gym. Funny how the dumpsters didn't smell all that bad until the 3rd circuit.

I picked up Little Caesar's Pizza for dinner on the way home and ate two pieces.

Tomorrow is weigh in day at the Fit Camp so I went out and rode my bike for an HOUR. I'm sure all my neighbor's think I'm crazy riding around and around the neighborhood.

Hopefully I show a loss tomorrow but I'm kind of doubting that's going to happen with all the partying and bad food choices this weekend.

Well here's to a happy hump day! Leave me some comments so I know someone actually read this and I'll visit you!Pin It
Posted by Julie H at 9:05 PM

You look fantastic! Love the pic after you passed tipsy...nipple biter! HA!
What a fun post! I hope to have that much fun with a man someday!

You look amazing! If I could just lose my god damn belly I'd be happy as well. I feel like at this point, I need a military boot camp or plastic surgery. Neither sound fun or cheap.

You look fabulous and if you figur out how to rid yourself of that gd belly - share for god's sake share!!!!

You are so funny and look great.... and what is wrong with boobage....... Have a great Wed and tell the hubs to have a good game