I celebrated with my mom on Friday night. We went to dinner at Casa Flores in Manteca. I originally wanted to go to Las Casuelas for their banging margaritas, but everyone else had the same idea. There wasn't even anywhere to park. That my friends is the sign you have a great restaurant.

So we ended up going over to Casa Flores, which, once I was there I remembered eating there once before. The food was still good and of course the conversation was the best. 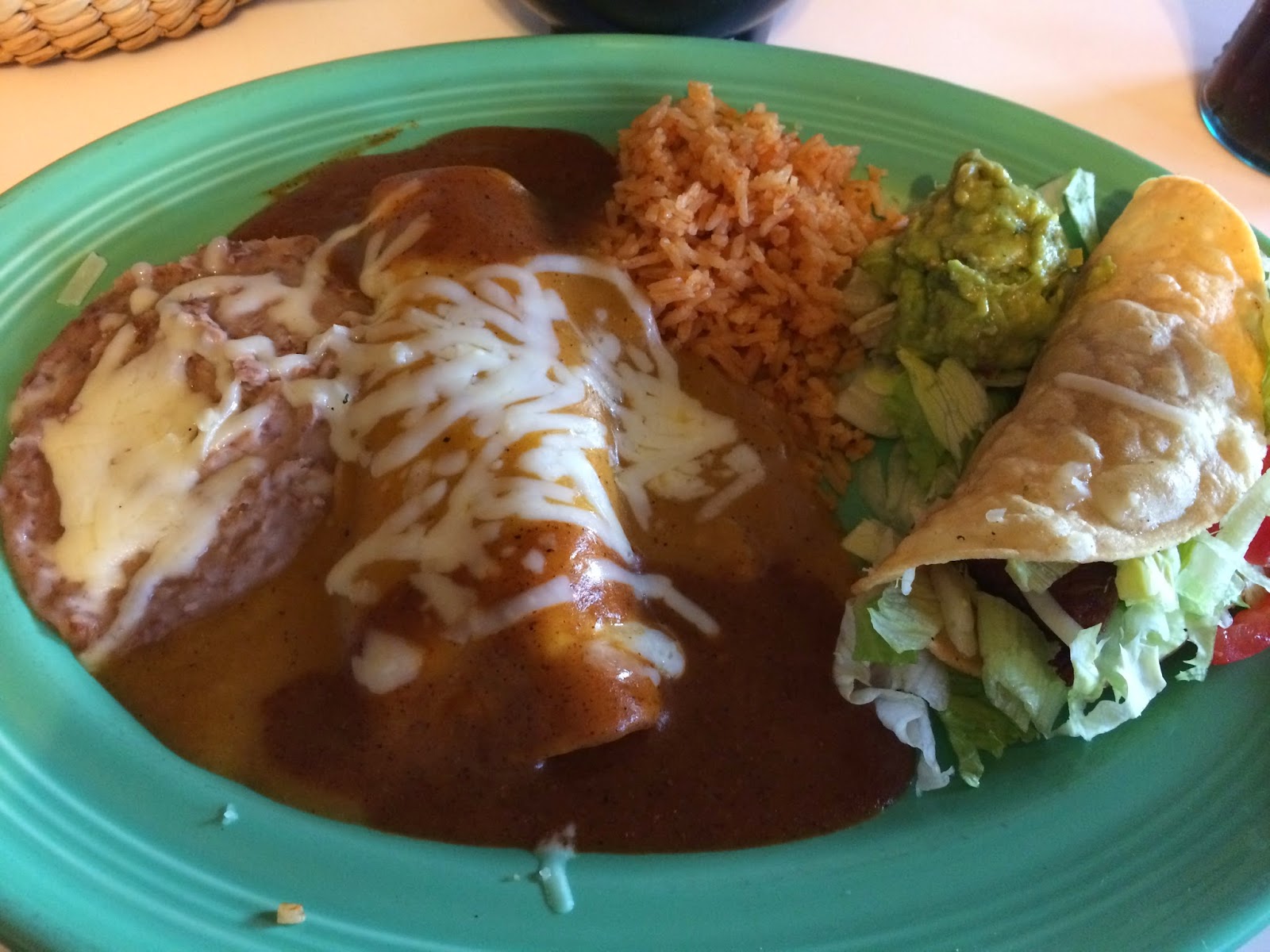 After dinner we went back to my mom's cabin and hung out until midnight. I figured I should probably go home then haha. I swear I could just talk to my mom for days and never run out of things to talk about.

I remembered the next day that I didn't get a picture of her with the flower I took her so Trevor and I went over there later and I snapped a picture. 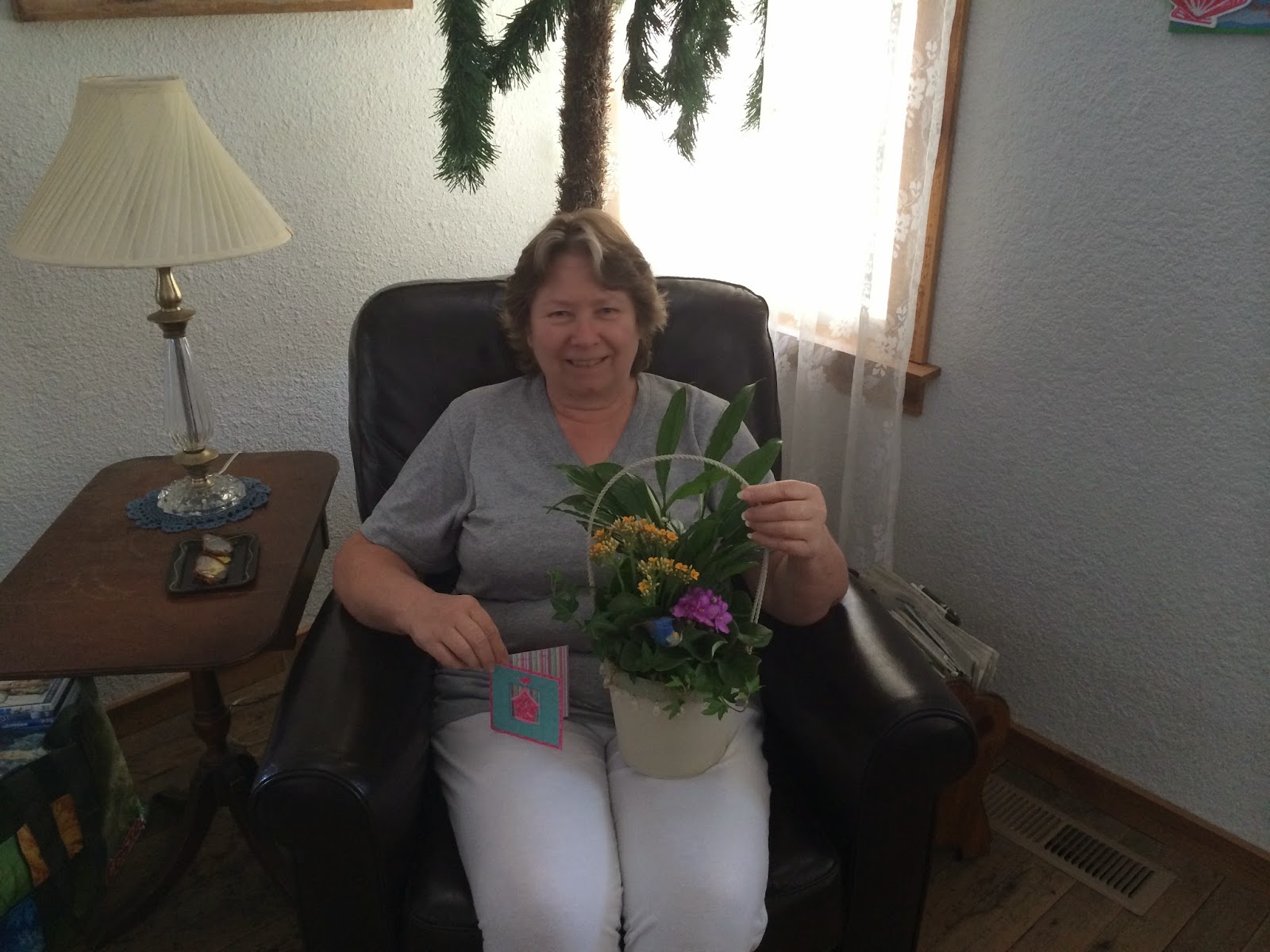 That was after Trevor and I got done hanging in the boonies. We rode our bikes down there so he could shoot his bow and arrow. While he was doing that I did a Bikini Body Mommy work out of running for one minute and walking for one minute for a total of 20 minutes. I would just run a bit in each direction so I wasn't too far away from him. I probably should have brought some water with me though since I was so thirsty when I was done.

Just a bit windy out there 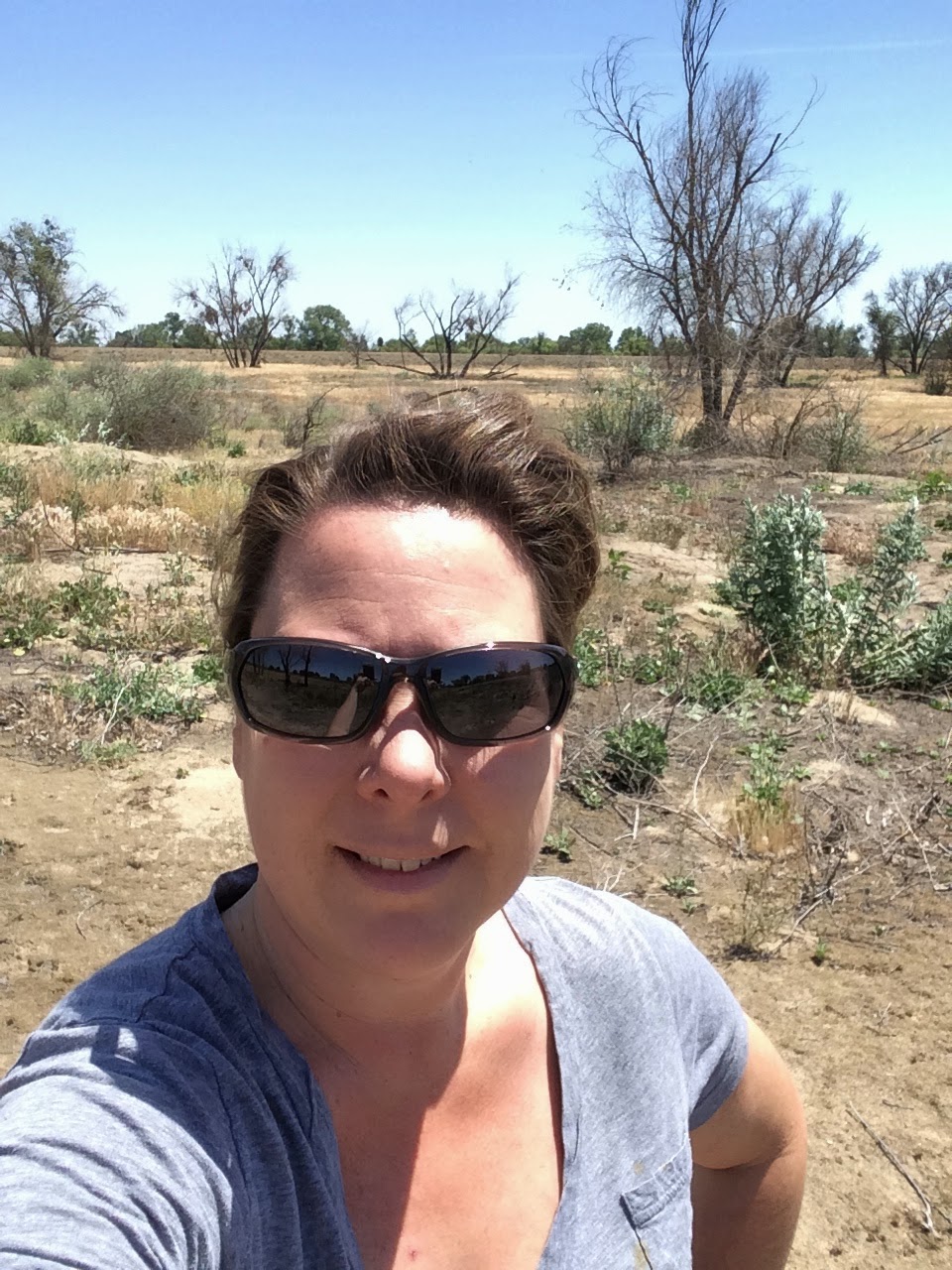 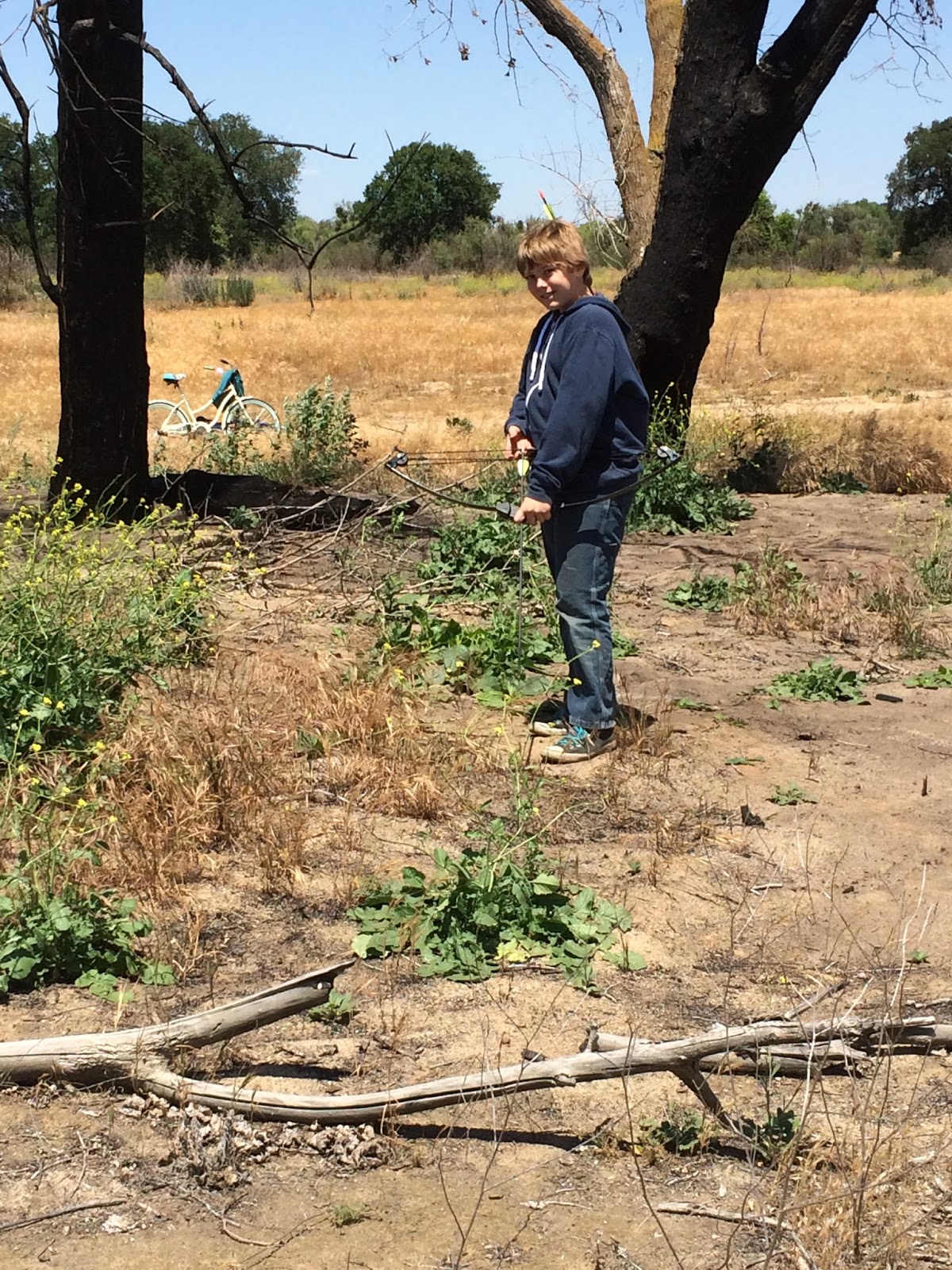 After he had enough we rode over to my moms. On the way we saw that the geese have had their babies. They are so cute! 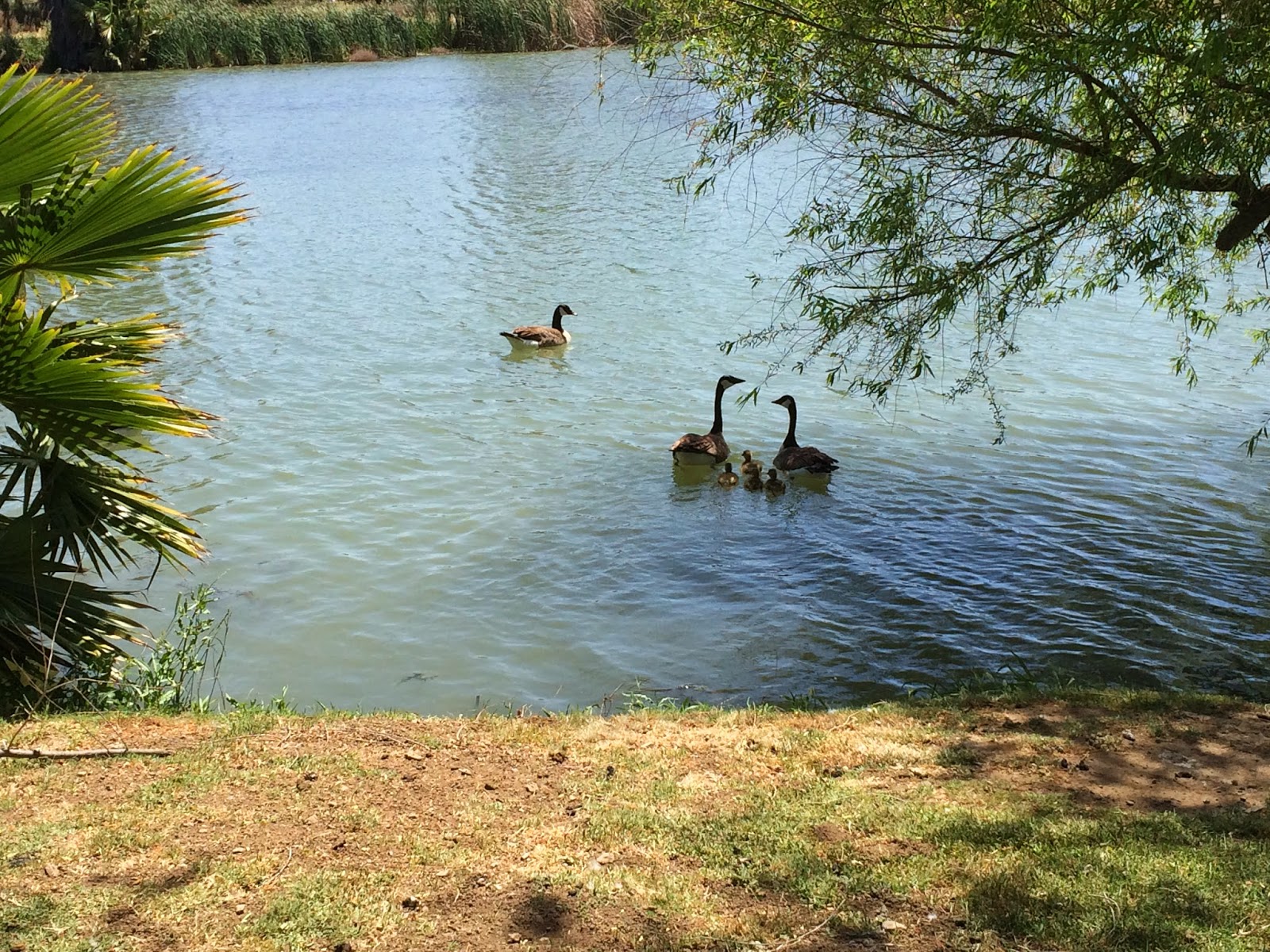 After visiting with my mom Trevor and I went to Dick's Sporting goods to get him some more arrows. We ended up getting a foam block target thing and a quiver (arrow holder case) too. Now he can shoot his arrows in the empty lot by our house whenever he wants.

We stopped on the way home to get some frozen yogurt. 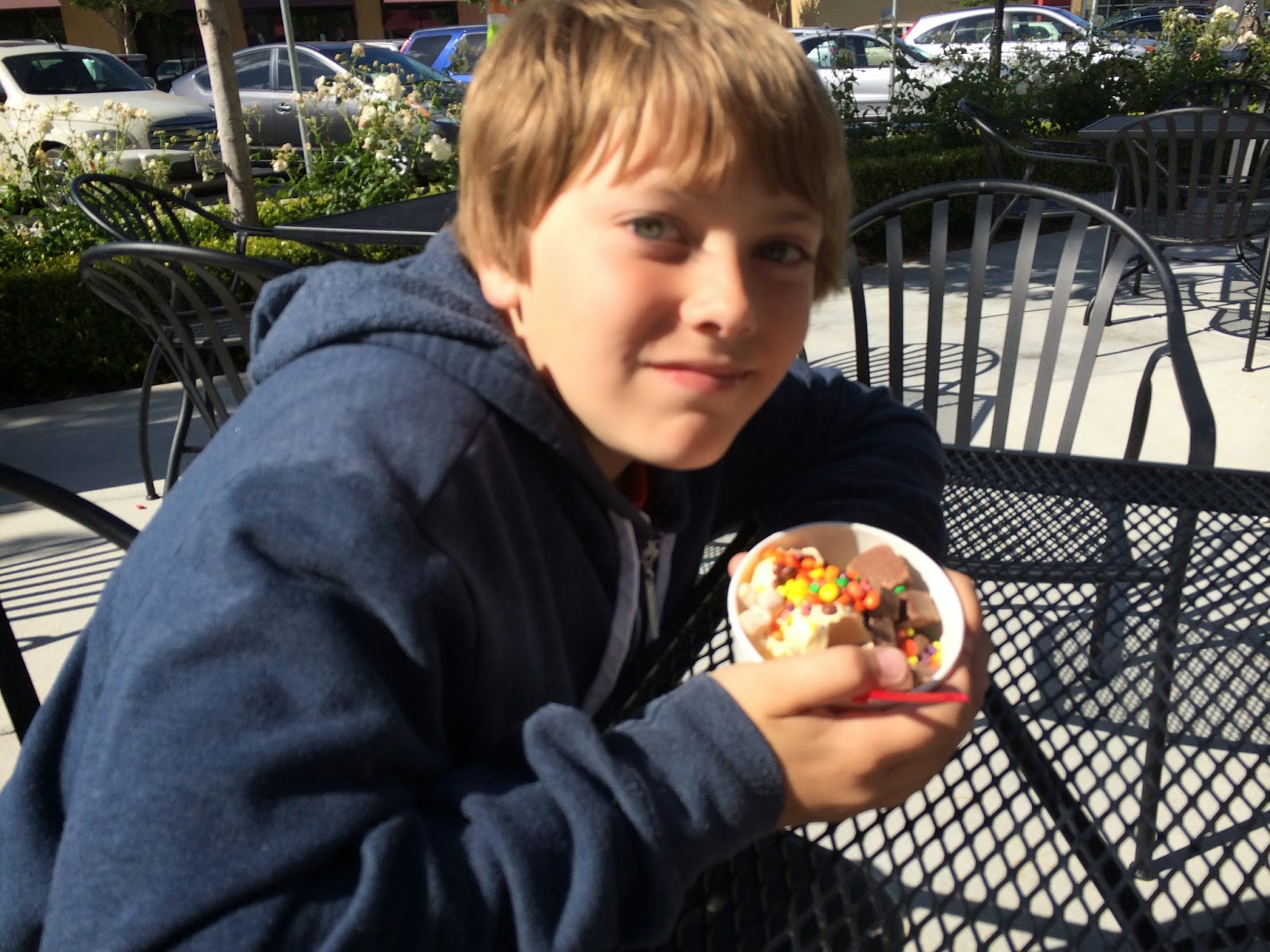 His bowl vs mine lol. Scott and I were going out for date night so I just got a little taste. I love the pomegranate and coconut flavored yogurts! 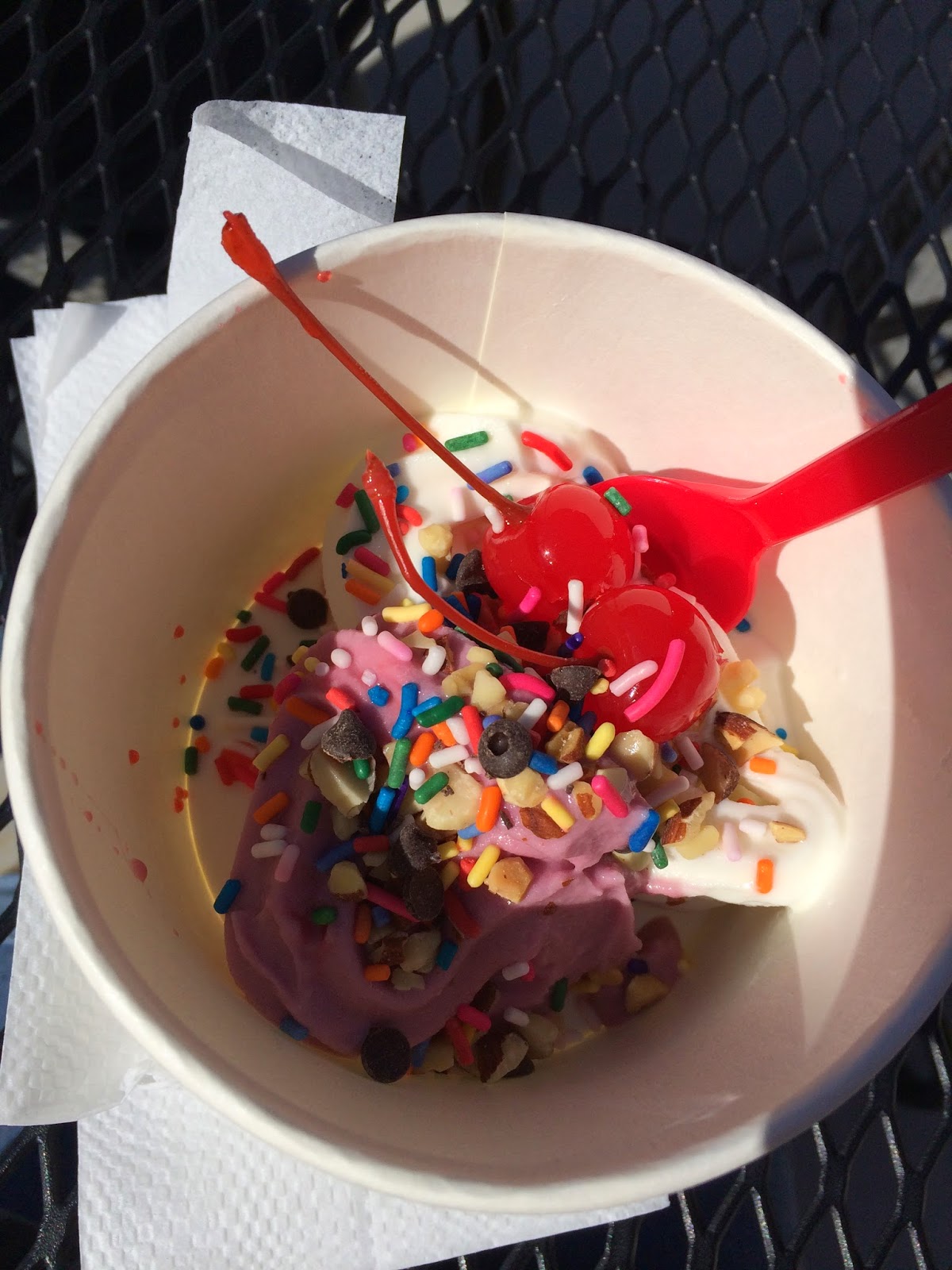 After we got home I really just wanted to take a nap but the dogs wouldn't stop play fighting over the top of me so I just got ready. Scott and I went out to sushi for dinner and then to the movies and saw Neighbors.

This was a new thing that we tried. It doesn't have any rice and it's wrapped in cucumbers. It was REALLY good. 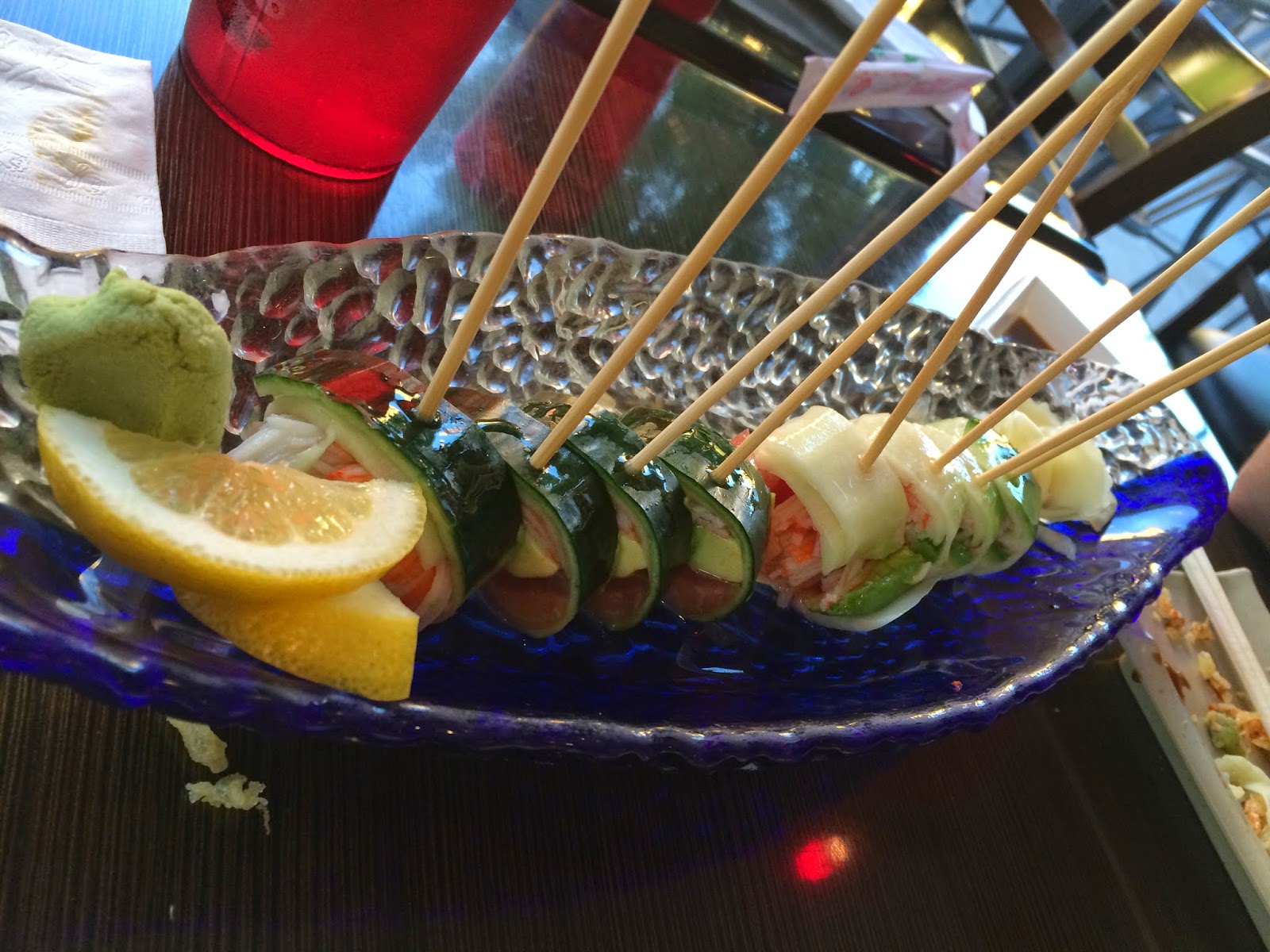 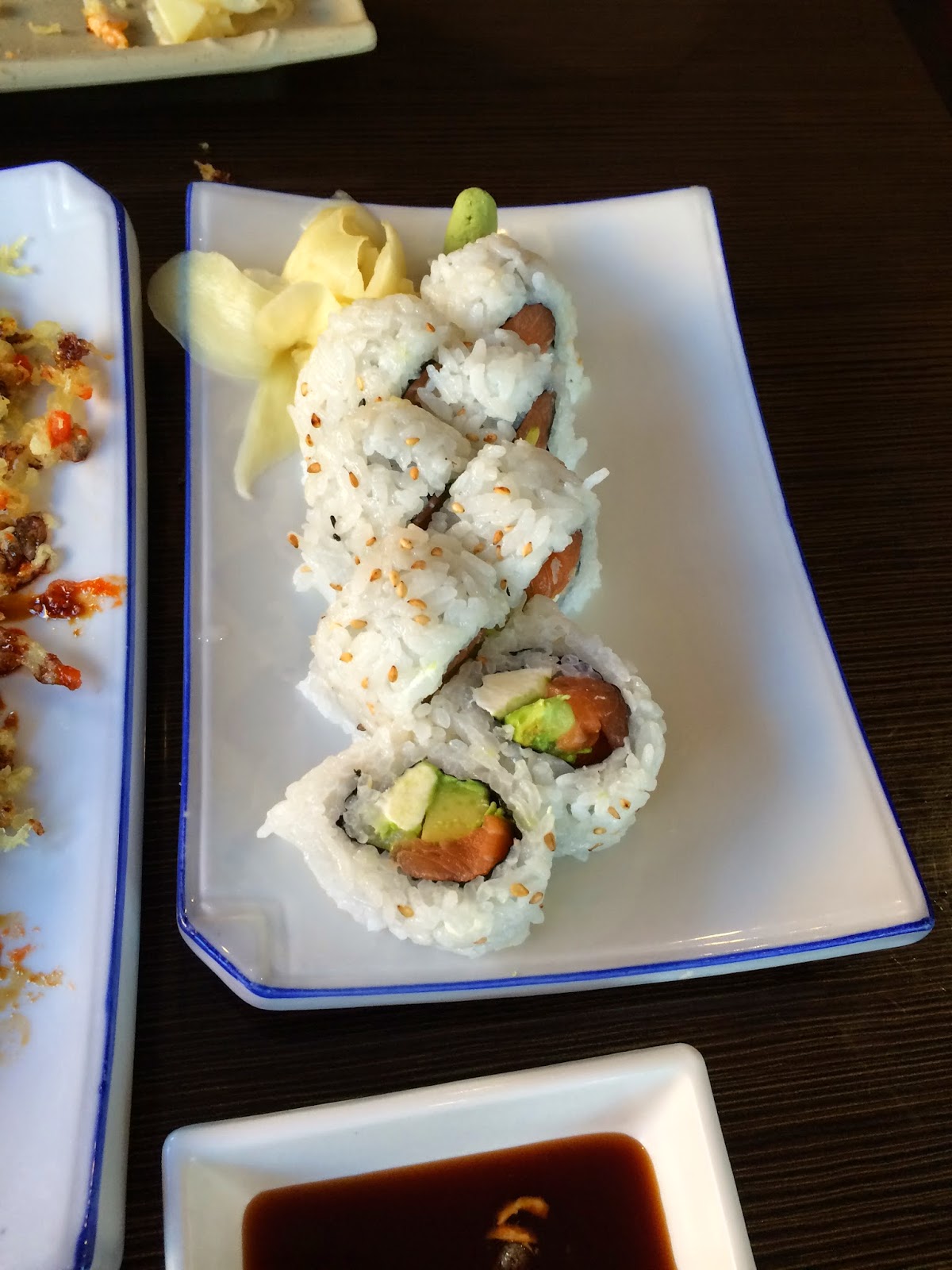 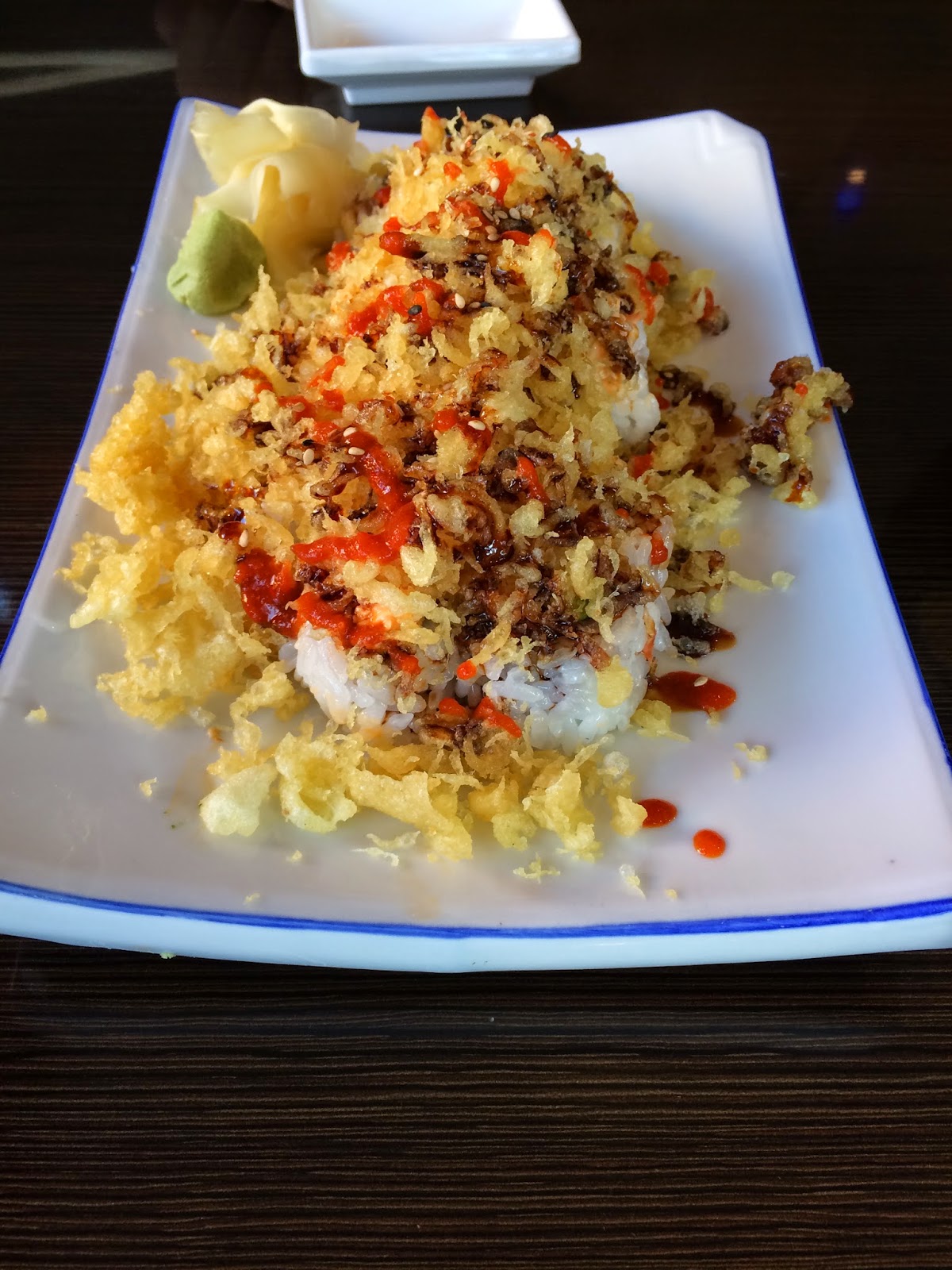 The movie was pretty funny but doesn't it seem like all the comedies always have to go over the top now? They all have to have a huge pot reference, boobs and something gross. Whatever happened to just being funny without being disgusting? Guess I'm showing my age.

Scott got a large popcorn and it turned out to be a bucket. Ugh. I tried not to eat too much of it but I had quite a few handfuls. Between dinner with my mom, sushi and popcorn there went my 2 pounds I worked so hard to lose all week.
Pin It
Posted by Julie H at 10:40 AM

Thanks. I'm drooling over the food photos! That roll with cucumber instead of seaweed looks really good!