This year for the Cancer Awareness Run & Ride I decided to do the 2 mile run along with the 25 mile ride. Last year we did the 60 mile ride, which leaves before any of the runs, but this year Scott wanted to do the smaller ride so we could get the kids to go with us.


Melissa said no thanks and Trevor did a 10 mile ride with no problems awhile back so I signed us up for the 25 mile ride instead of the 12.

We got up early and got there in plenty of time for packet pick up and milling around talking to some people that I know.

They had a 2 mile run along with a 10k. I didn't want to push my luck with the 10k since I haven't been running longer distances lately so I had just signed up for the 2 miler. Which, was a great idea! I've been running 1- 2 1/2 miles every day for over 20 days.

I started out towards the front of the pack because there was A LOT of walkers and I didn't want to have to get around them all. If they were smart they would have made a line to have the runners in front of and the walkers behind when we lined up. I almost saw a grandma lady get run over by runners lol.

I felt pretty good for the run and I was happy to see that I came in under 20 minutes, so sub 10 minute mile average (I actually had a 10:01 for the first mile and 9:11 pace for the 2nd). Later I found out I came in 6th for my age group out of over 40 women so I'm definitely proud of myself for FINALLY starting to get some speed back.

I had Trevor take a picture of me afterwards. I think I was giving instructions lol. 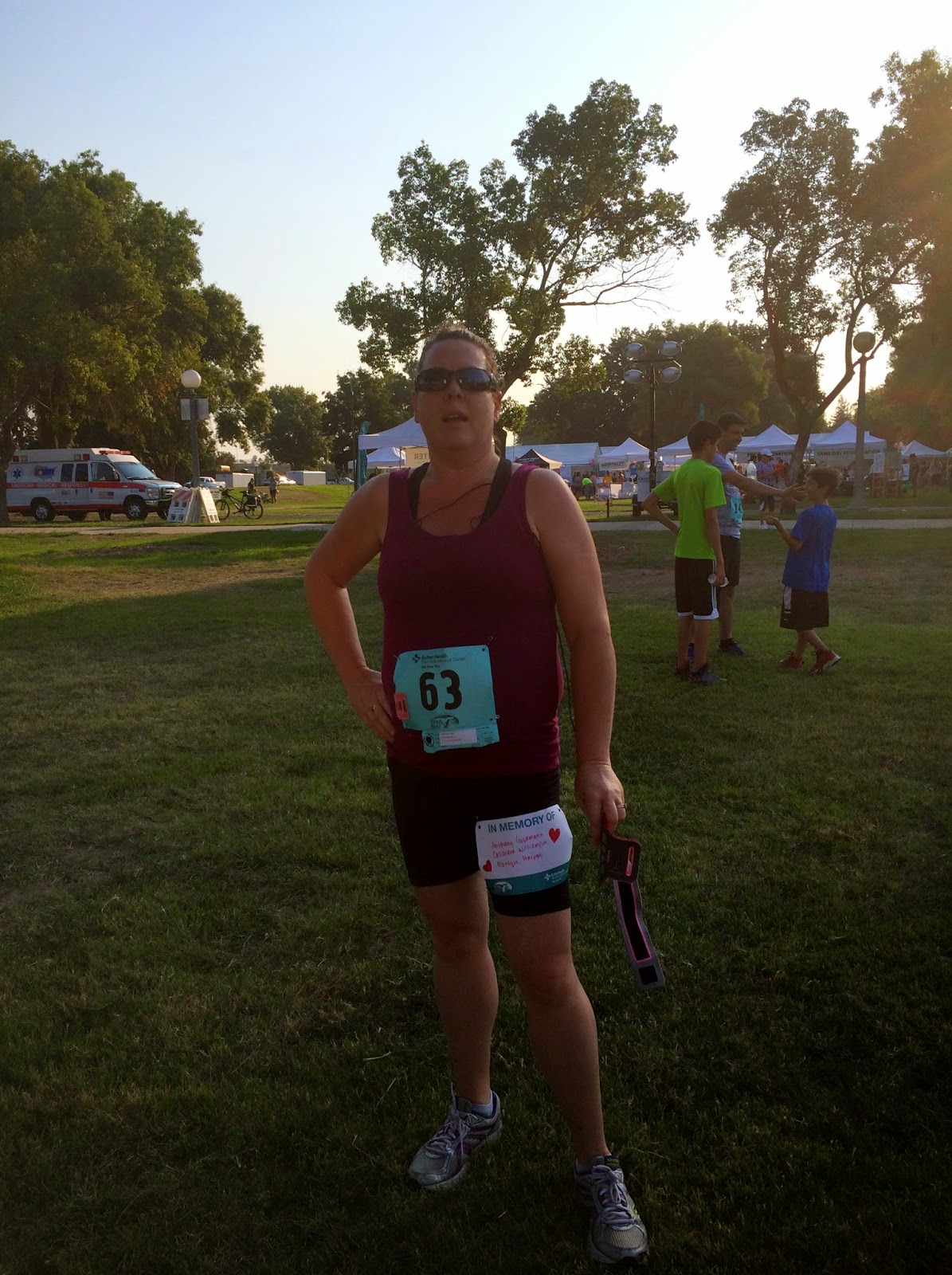 On my leg is this bib they had. I went back to add Ruben's name and couldn't find the markers. Ruben is my good friend Lupe's brother who died this year from kidney cancer. Anthony & Casandra are my friend from high school who both passed away this year, and Marilyn is my Grandma. 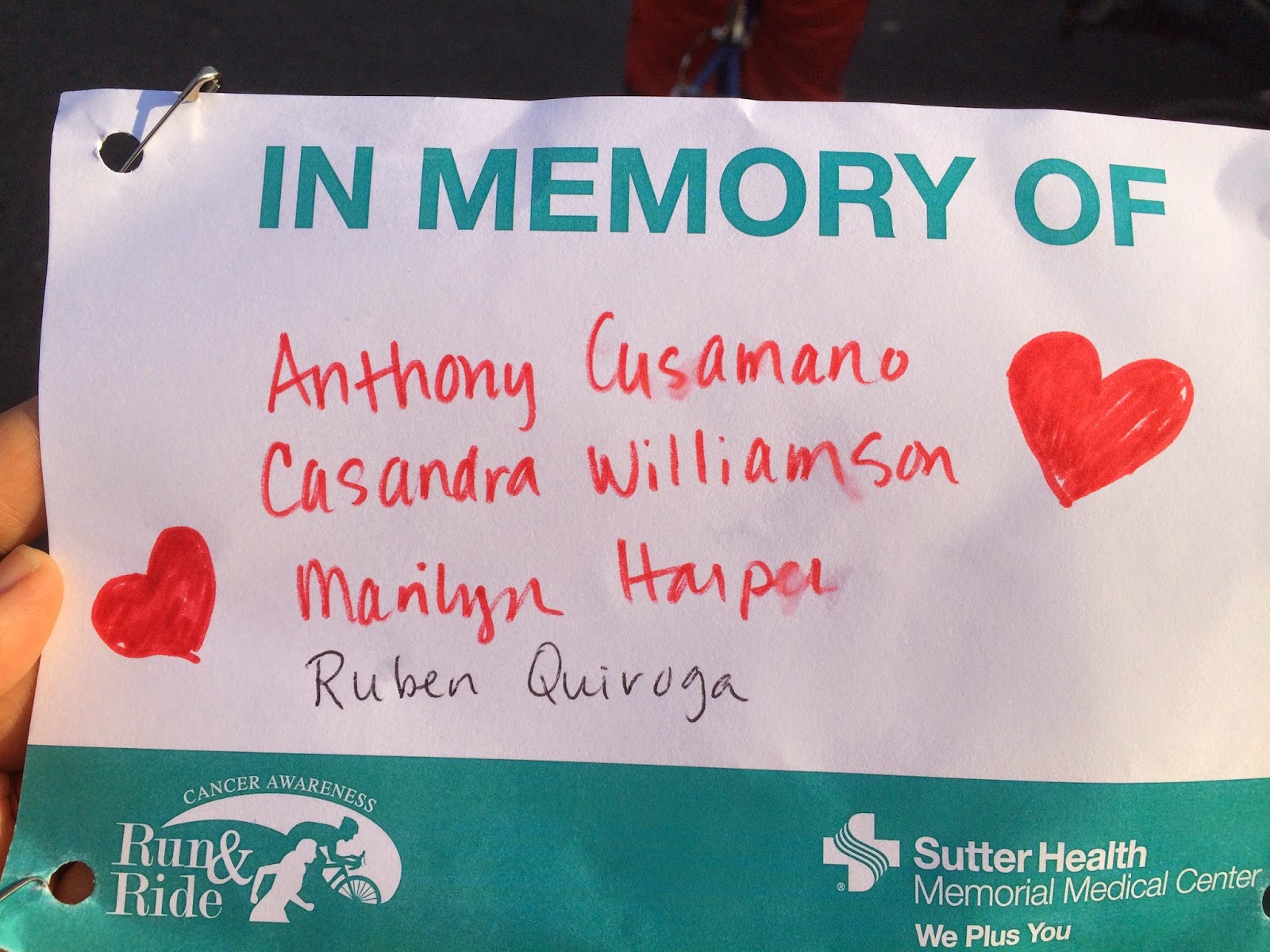 After the run I went to the truck to change my clothes. Scott went to pump up the tire on my bike and it blew out so he had to change my tire. We walked around a bit looking for some bananas. Instead we found a tent with mostly processed junk food. Made me wonder why at a cancer awareness event they didn't have healthier food? I ended up sharing a fake apple danish of some sort and drinking a little chocolate milk. If I do this again I'll make sure to bring something to eat between the run and ride.

Eventually it was time for the ride. We all wore our new jerseys they gave us, which is really nice! Usually I wouldn't wear a race shirt for the actual "race" but it was fun to all be matching. 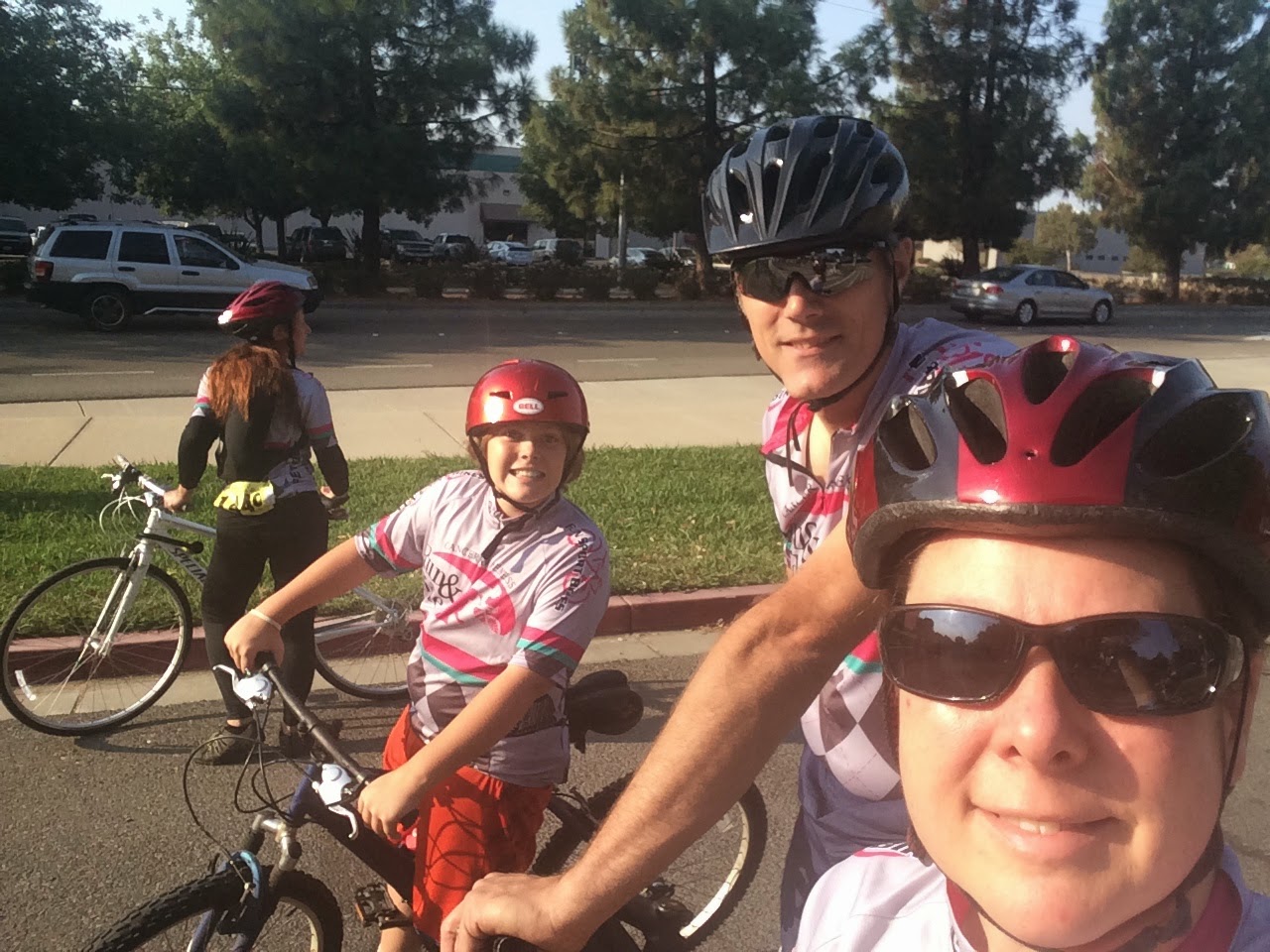 Trevor did really well for the first 8 miles or so. Then he started getting tired. The first rest stop was at 11 1/2 miles so we did a lot of talking while we were riding and a bit of distracting from the actual ride to keep him going. Scott mostly rode ahead of us and I rode with Trevor and behind him.  That last mile to get to the rest stop was a bit rough but no crying ;) 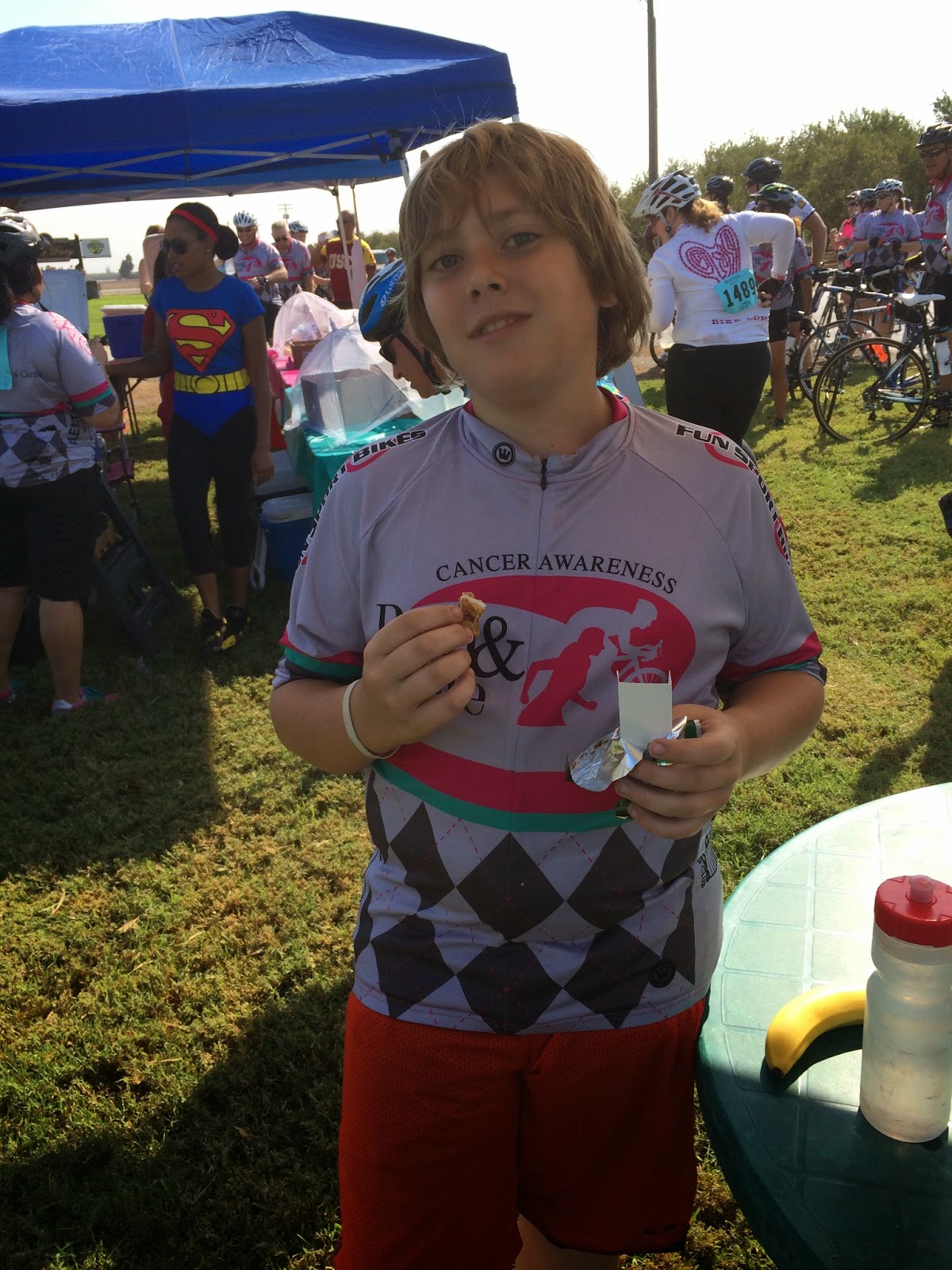 I let him use my gloves after the rest stop because that was the thing that was bothering him most. His grips on his bike are like little waffle grids and were doing a number on his hands. The next rest stop was after another 8 miles. We stopped once on the side of the road because his head was hurting. I had him drink some water and pour some on his head. That seemed to perk him back up until the next stop. 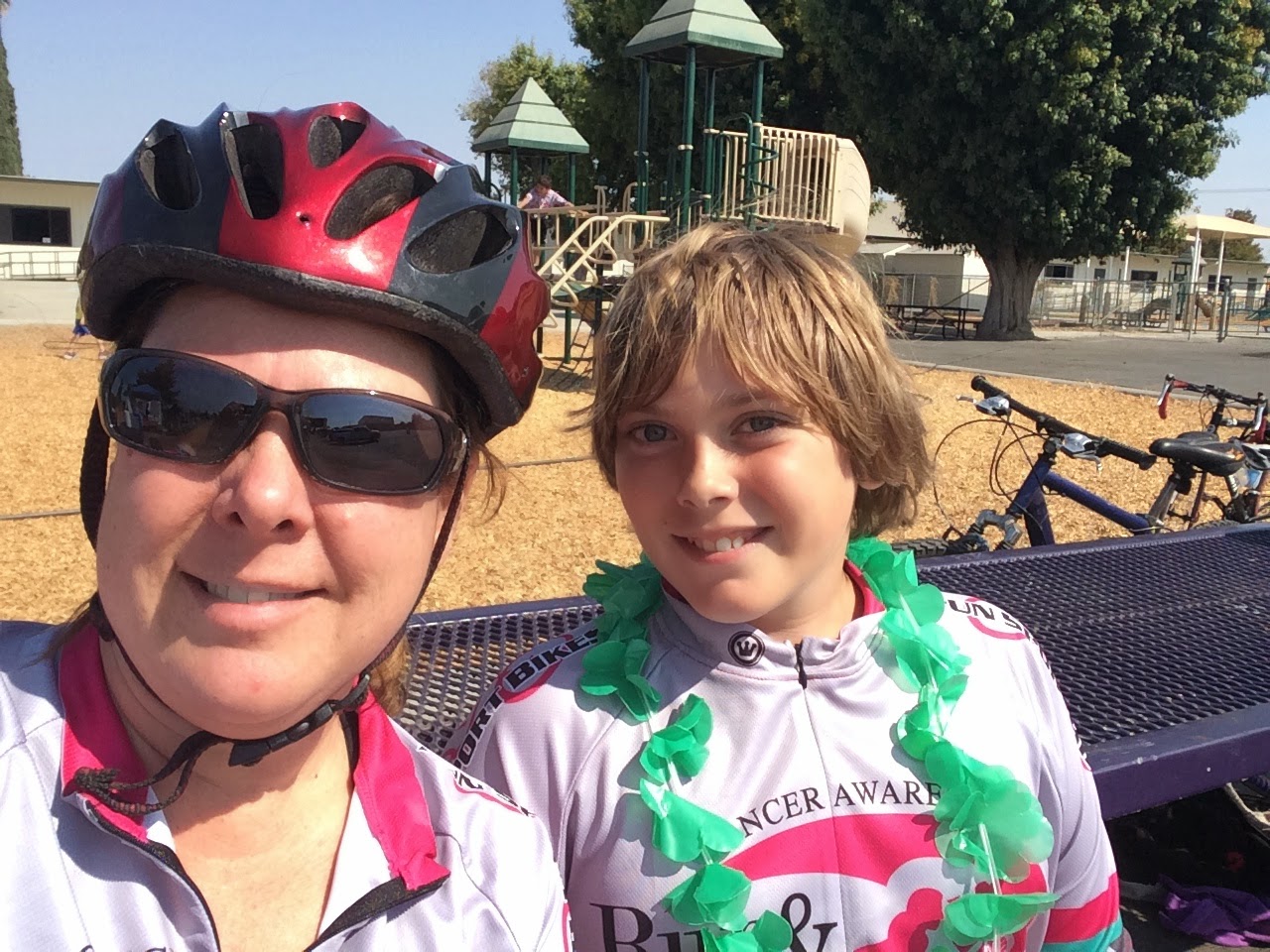 After that it was just 5 1/2 miles until we were done! The battery on my phone died right before we finished. At last I got most of it ;) 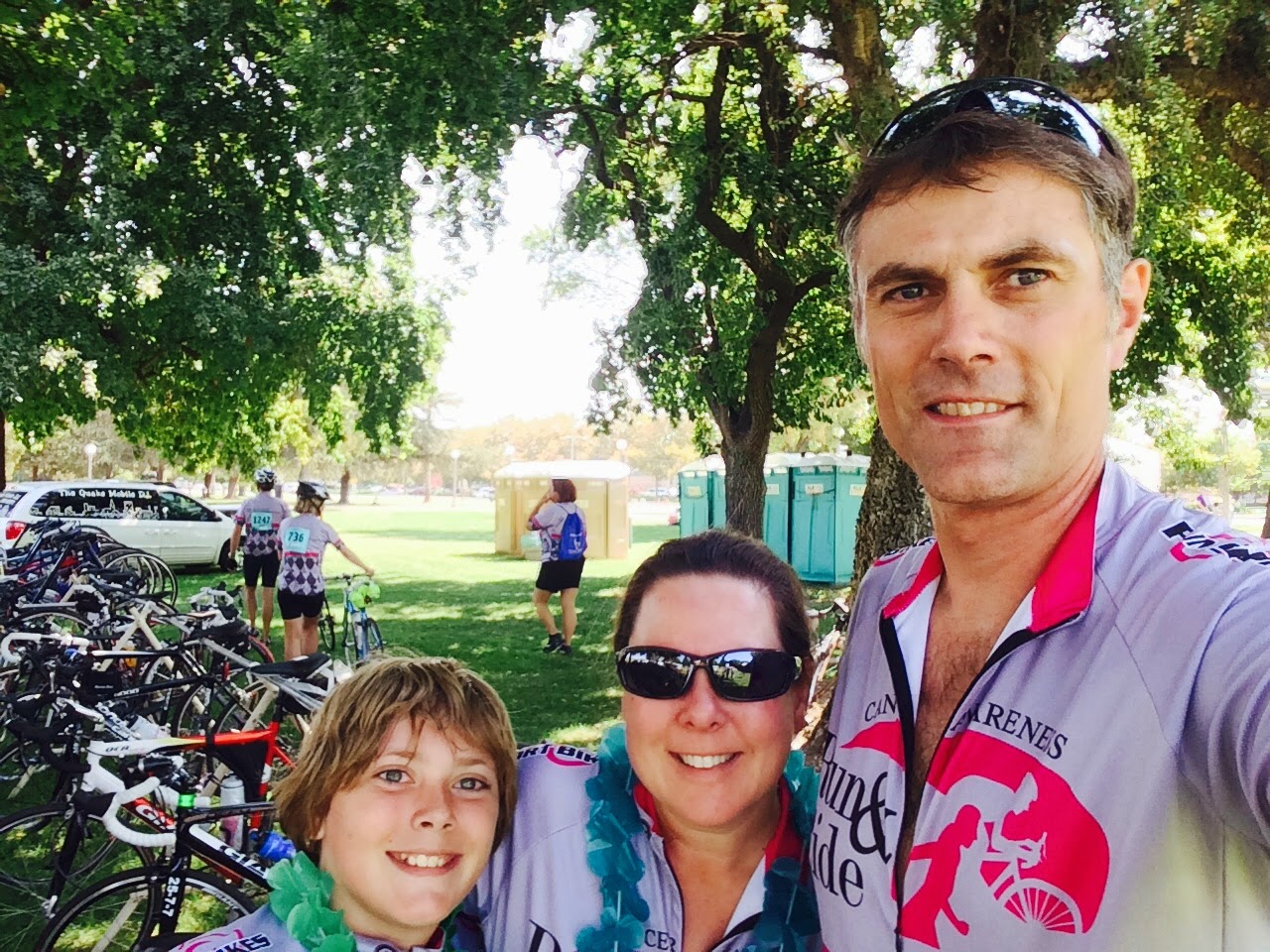 Then it was time for some food from their BBQ, tri-tip, chicken, and chips. I passed on the soda (I haven't had a soda in over a month!) and had water and another little chocolate milk.

I am so proud of my little guy to be able to ride 25 miles on his bike!

Wow! Awesome! Congrats to you all! Trevor looks fantastic for just having ridden that far for his age!!!! Awesome! And what great examples you and Scott are!

Well done the lot of you!