Well between my slow internet and my computer that keeps "shutting down" in the middle of me doing something I'm going to attempt do do a blog post. Wish me luck haha.

So it's Memorial Day weekend. Ahhhh the weekend the parties start. The kids are out of school (thank God) although Melissa might be doing a summer school class. She doesn't have her license quiet yet and I can't really take her in the morning because it's the opposite way from my work and Scott doesn't want to drive her because he wants to ride his bike to work for the summer so who knows. Guess we'll figure it out before the 6th.

I spent the morning yesterday working out in the yard. Re-weeding the areas that I already had done but all this new grass popped up in and the front of the yard where the rocks are. All these stupid little puffy weeds keep coming up there so I got them out for now. Next to go back to working on getting the grass out of the middle of the other side. Pictures would probably be more helpful here!  I might have to go take some and come back ;)

I had to stop weeding so we could go to my friend's house. Her son is going into the Navy on Thursday. Her older son is already in the Navy and in Guam so this is her baby. All our kids are getting so old. Just the kids though, not us haha.

We sat outside for most of the time and it was so hot I had to go in and sit on the couch to get a break from the heat. Felt rather anti-social but it was that or go home. Eventually we went back outside and ended up staying until about 9, so that was a long day!

Today I have book club at 2. We read the book Am I The Killer? I liked the beginning part but then it just got kind of slow and boring. Too wordy! I ended up skimming to the important stuff. We'll see how everyone else liked it.

Last weekend our friend Allen gave us his Giant's tickets. He was sick so couldn't go. I've never been to that ball park before so that was fun! It's a lot smaller than the A's stadium, but really nice! The game went by super fast though. I think it took us longer to get there and get home than to watch the game. 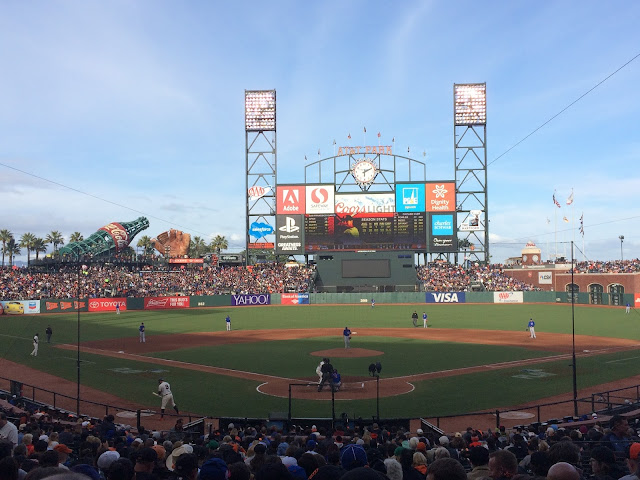 My friend Heather was there with some other people that I have ran with before so we hung out after and met up with them for a comical walk back to the BART station. Lots of waiting for them to catch up since they may have had a few beers. 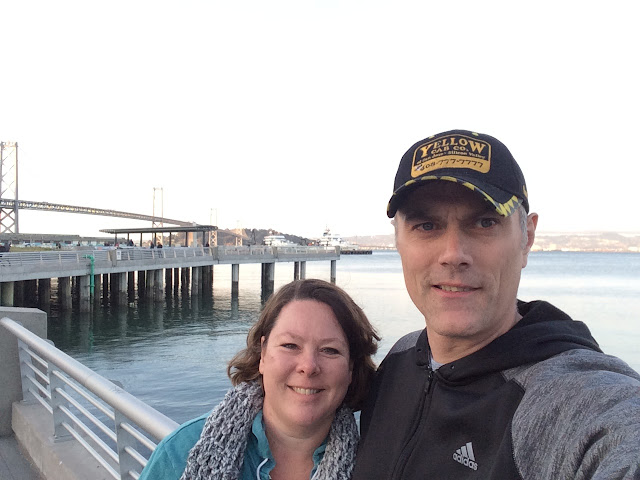 See how long it took us to walk to the other side of the bridge lol. It got dark! It was really pretty all lit up though. 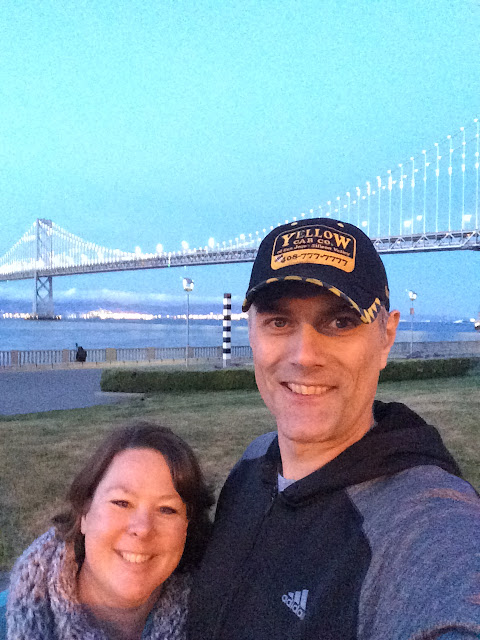 After we got back to the BART station on our side we all went to eat at this restaurant. At like 11 pm lol. Scott and I shared a pulled pork sandwich which he inhaled. I swear I think he just put the whole thing in his mouth at once. Big guy problems lol.

Well I made the kid get off the internet so I could post this since he was slowing it down. Weird how the laptops just zap it all up but the desktop that it's actually plugged into seems to get the least amount of juice.
Pin It
Posted by Julie H at 9:35 AM

Griffin 'inhales' his food too! I swear it just goes down his gullet in 50 seconds flat.

What fun that game sounded like!!! The ridge is beautiful lit! I am so jealous of your yard work-hopefully by next year I will
Have a house instead of condo