Ick it is Monday again. They have closed down payments until October 8th so I don't really have much to do. The new fiscal year is October 1st so I'm just chilling until then I guess!
We have started giving Buster some wet cat food since he is so skinny. He's just wasting away but doesn't seem to be in pain and is still following me around and stuff (he's 17). Of course I can't just give Buster some wet food, all the cats get some so now they are all a bunch of beggars. Buster is the worst of them all. 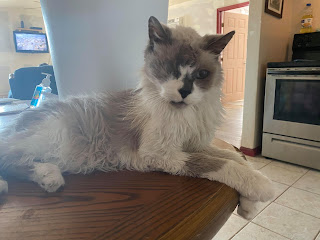 All I did was sew this weekend. I made a ton of masks and sold a lot of them too. After I got those done I made up the green and dark blue scraps I had into crumb blocks. All I have left now is brown (and a bag of Halloween). I'm not sure if I want to make blocks out of brown because brown is kind of ugly.  We'll see. I've been taking out the bigger pieces in my bags and wrapping them on cut down comic boards. 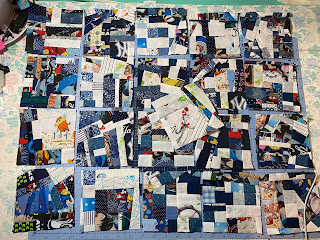 I'm tempted to undo the black squares I sewed together and just mix them all up. 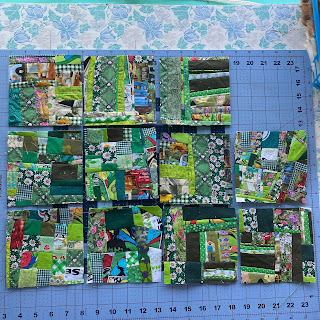 I pulled out a blue basket to use while sorting. They still work great for catching cats! She hung out in this basket all day lol. 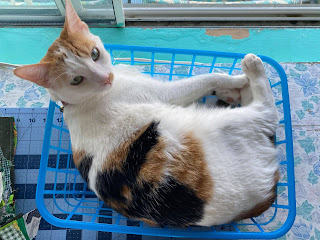 The septic guys are supposed to come tomorrow. If they don't show up I'm going to freak out. Getting a bit sick of things getting delayed.
Saturday Scott's truck took a dump so he has my car. I'm not quite sure what his plan is. No mention of fixing it or going car shopping so we shall see. All I know is if we get another car the truck needs to GO because we have enough vehicles that don't run in the yard already.
Pin It
Posted by Julie H at 8:58 AM

Love all the masks you are making. Would you consider making some type of filter/fabric insert that can be added between the layers of the mask? I can send you a photo of what I'm talking about if your interested. I have masks that need a third layer in-between that I'd like to switch out.