Both the girls had games today so we got the week's games done in one shot! Scott was with Melissa's team since he helps coach her, so I was watching Jessica's game with his Mom. They were losing SOOO bad. Then the last time they were up they had an unlimited inning and EVERY GIRL was getting a good hit. They scored 8 runs in that one inning. Not enough to win but at least they didn't get totally blown out!

After the game we went to KFC for dinner. Jessica was throwing a little hissy fit for some reason. I think she just didn't want to eat there, and then they were out of mashed potatoes. ::the horror:: Anyhow she really wants her own room so I think we are going to move Melissa in with Trevor for awhile (since Trevor spends most of his time sleeping on the couch right now anyways) and let Jess have her own room. Now to just get up the energy to do all that moving around. Maybe next week when I'm off of work.

**Editing to add some pictures 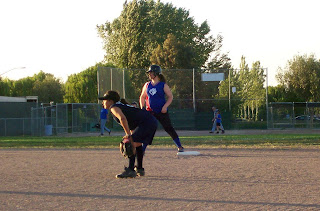 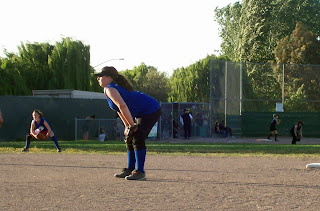 Good luck in all that moving around. I actually like doing that most of the time. Love moving into a new house but hate packing up the old one! Have a great day.