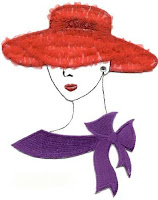 And I didn't even drink any booze! So this is where we went tonight. We had a nice dinner, although mine was HUGE. We actually ate in the lobby of the theater. The play was REALLY good, although I'm sure it would be better if I was over 50 but I can still relate to a lot of the scenes. Very nice! The one woman not sure what her name in the play was had a BEAUTIFUL voice. I had a nice time visiting with my mom after she got off the whole "losing weight" saga she seems to never stop talking about.

Back to earlier today. I was at work and had to go on some field checks with this gal at work. So I'm driving, she's acting like she's navigating but she sucks at doing that so I am sneaking peaks when she's not looking to figure out where we are going. Anyhow, she asks me, "Do you ever kill your food and then cook it?". UM yeah well since the only thing I don't feel bad about killing is ants (freaking HATE those things), of course my answer is "no, I only get my food from the grocery store!" Then she goes on to tell me this story about when she was a kid, around 6, she was at her Grandma's house and this neighbor girl was in medical school. She said that she had to do a project that involved going to the cemetary and getting a body (they had to be so old-the body). At this point I was "ummm in Mexico??" because I really can't see anyone letting you go to the cemetary and picking out an old body here and letting you take it home. She says "jes". So anyhow, guess this neighbor girl and her friend who was also a medical student each get a body, one man and one woman. They then BOIL the bodies in the backyard. UM HORK?? HOLY SHIT. Then she went on to tell me that sometimes they cooked pigs too. yeah ok :::twilight zone music playing in the background:

So after that fun 2 hours with her I got back to work and then jumped in my car and jammed over to my favorite mexican place to meet my friend for lunch. It was taking forever so I decided I'd just not go back to work (I called!) since I was going to leave early anyways. Had a VERY YUMMY Midori Margarita. It was nice catching up with my buddy. I so miss having her at work everyday to make my day go faster! She was my comic relief.

After lunch ran to Target to find some pants to wear to the Red Hat thing. I had 8 things to try on and the limit is 6. How stupid is that? Had to leave 2 things at the counter. So then the dilema is, at what point do you go out and exchange 2 things for the 2 other things you want to try on? Obviously you can't just run out there in your undies so you have to get redressed to go out and exchange the clothes. What a freaking pain in the ass! Anyhow got that done and got a new pair of shoes, ran home and redid my make up, straightened my hair and got done just in time to jump in the car with my mom and then get on the bus for the trip. I swear I hardly stopped running all day!

Tomorrow I'm supposed to meet up with my friends to go to the Farmer's Market in the morning but I think I'll take a pass on that. They aren't going to be happy with me but obviously I'm going to need to sleep in since I still haven't burned off the cup of coffee I had after dinner. :bzzz:Pin It
Posted by Julie H at 12:17 AM