Good morning happy Saturday!
Yesterday I got all the sunflower wine bags done. They are so nice and cheerful! 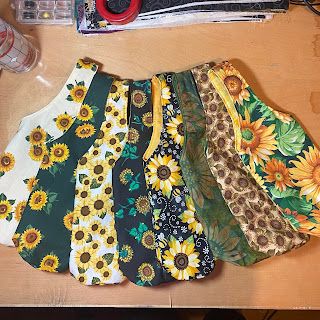 Next up is keychains. I went through my partially finished box to see if I had any sunflower stuff in there and ended up pulling out a few other things to throw into the mix while I work on them. I have all the interfacing on so it's just pinning for now. 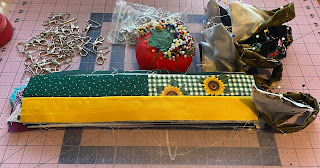 I went to darts last night and our team won all but one game! I won THREE, which was all the games I played minus the big finale game. So that was pretty awesome. The guy on our team said that we are in 4th place overall, we'll see if we can keep it up until the season is over which is the end of February. I stayed afterward and hung out with neighbor friends. Tonight they are doing karaoke so I might go down to hang out again.
My fridge is almost completely empty and I'm like how is that possible since I just spent $200 at the grocery store this week. Ah well I have meat in the freezer and some canned stuff so I guess that's why. One way to keep from over eating, I have to cook stuff to snack on lol. I took out some stew meat for dinner tonight. That sounds delicious already.
I've been on a Netflix roll lately. I'm currently back to watching episodes of I Am A Killer. They have another season. I just watched the first episode last night. They are pretty long episodes so that will take a little while to watch/listen to while I sew.
Pin It
Posted by Julie H at 8:18 AM