A New Sister In Law and more Taxi service

Crazy crazy around here lately! Yesterday Jess got out of school early for the last day of the quarter. The bus wasn't going to come for about 2 hours after they got out (how dumb is that??) so I went and picked her up. Then we went to the mall and got her a shirt to wear for tonight. Came home in time to get Trevor from the bus. Then after a bit had to go pick up Melissa at school from Girl Scouts (yes she is doing that again UGH). I asked my mother in law if Melissa and Trevor could spend the night so I went directly from the school to her house, dropped off the 2 little kids then hopped on the freeway to go meet my family for dinner.

Yesterday evening my baby brother and his girlfriend got married at home and then we all went to dinner and then back to their house for cake and champagne. 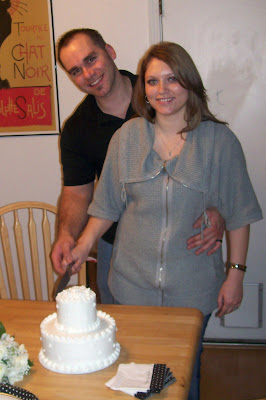 They are planning on having a "bigger wedding" at a later date, a few months :cough: cough: down the road. She's totally cute and fun so I'm glad she is now apart of our family.

So came home last night, Scott was crashed out in the chair. He got up this morning and left for a 4 day camping/fishing trip with a friend. This is only the 2nd time he's ever went somewhere without me. I think it will be good for him though! BUT that means I have no back up! So that is why the little kids went to their Grandma's. Because Jessica had to be at the softball field at 7:15 this morning.

And it was COLD. She was so not "in the game". We were a few minutes late (like 10) and I guess the other girls on the team jumped all over her. She takes things REALLY HARD and so she didn't do too well the first game.

After that game was over (they won) we had about an hour to kill and she just wanted to LEAVE. Didn't care where to. So we went to Kmart down the road so I could get a new car charger (Scott stole my other one), then she decided on some Jamba Juice. BUT while we are in the car she is fighting with one of her friends via text message. NICE.

I wish this kid could just find a best friend and just keep them forever. Is it really that hard?? At least through high school would be nice. You know, that one person that you can tell everything to and they tell everything to you and you pinkie promise to be BFF.

So we got back and she was hanging out with some other girls from her team and our other team from our city and seemed to be doing ok so I just went and sat down and watched another team's game until it was time for theirs.

She did a little better on the 2nd game, but she still looked like she was exhausted. Which she probably was because I sure was! (BTW they ended the game in a tie, how weird is that?)

After the game was over I dropped her off at home, went and picked up the little kids, then came home and crashed out on the couch. She had to wake me up to take her to town so she could serve at the big band dinner thing they are having tonight (which we aren't going at $40 PER ticket OUCH). It's required to go or their grade gets dropped in that class. I have to go pick her up at 10 tonight. WeeeeeePin It
Posted by Julie H at 6:04 PM

Wow ~ that's a lot. I'm sure glad it was nice and warm at our baseball game today!

Your new sister-in-law looks really lovely... your brother is a lucky guy.

You put a lot of mom-taxi miles in today! I totally don't miss that. I can't believe I'm happy about my teenager having a car. Congrats to your bro and SIL, they look like a great pair!

I'm sorry she was scolded by her teammates. I did not like highschool at all. I was involved in EVERYTHING and was usually the Pres. or Vice. Pres of the club--I remember what it was like to be so busy.

I think she will find that person. I did, and that means anyone can. She will realize that the fighting is just not worth it--everyone does.

I hope the BB dinner went well...glad you got to relax a little bit.

How do you fight in a text message? and damn you sure picked a good name for this blog! You are a damn taxi!

Goodness. After reading all of that..I want to take a nap. I'm tired just imagining having to go all over the place.

Congrats on the wedding.

And I've explained to Dom already that he shouldn't expect every friend that he has now to last a lifetime, but just cherish those that do. Pass on those that cause too much drama.