Today I ate a donut. I'm proud of myself though because I only ate ONE donut. Two boxes at work and I only ate one. Old Julie would have had three at least! 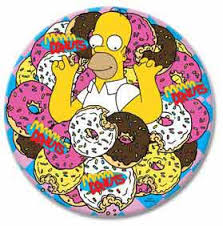 It's all about balance right?

So I got off work early today for the holiday weekend. I went to two thrift stores. I was mostly looking for some audio books but I didn't find any (just some on cassette tapes but those won't work). I actually went to two stores and didn't buy a thing! Go me haha.

Probably helps that I have a ton of crap I need to clean up and go through in my room so I don't want to bring anything else in there. I'm not in the resale mode so even though I saw a few things I probably could have bought to resell I resisted.

I have almost half an hour before the school bus comes. Ahhh the house is so nice and quiet! Scott and I are planning on doing a date night to sushi.  Which means I'll probably just have him pick something up for the kids for dinner on the way home.

Tomorrow we are running a 5k. I was thinking about it and this will be my first 5k since last December. After that I started running 10k's. I signed up for this one to run with my friend Dee. She's still in the hospital but is supposed to get out tonight. Sadly she won't be running with me, but we'll find another one for her to run when she's better. Scott is running the 5k also.

And next weekend we are running ANOTHER 5k. Funny how that worked out without really planning it, but that's the Bean Run, which will be the first time I've ran a race AGAIN. Man I remember how nervous I was for that race. I even cried a little. Now I'm like eh, only running a 5k tomorrow. Funny how perspective changes!

Scott was talking the other day about how hard it is for him to do four miles. I told him, heck remember when it was so hard to run for twenty minutes? He said he remembered when it was so hard to run five, and I do too! That my friends, is where training gets you. Those little distances are now just that. Little. Not that they are always easy, some days making it through that first mile takes a lot of talking through in my head. But I tell myself it's only __ distance, you've ran so much farther, you can do it!!

Today at work I found out someone else that works in the office is a runner. Um dull girl=my new best friend! Haha! Maybe not really but I was pretty happy to talk running with her. She's going to do the Tinkerbell half in January. I know my friend Sarah is very jealous of that! We'll get there some day Sarah!

Do you have big holiday weekend plans? Mine are to run and run some more. I should probably go ride my bike too since we have that 60 something bike ride in a couple weeks and um yeah, I've hardly rode my bike at all? I'm thinking that's going to be a major suck fest bike ride. Thank God it's flat so if I stop to cry at least I don't have to worry about falling down the hill.

All that exercise - I'm so impressed! I did a run/walk 5K in June, but I hate running - everything bounces all over the place and it makes me feel so fat and ungainly.

Who's the other runner in your office?

After I had Henry in June, I started the Couch to 5K program over, because I hadn't run since I got pregnant with him. I think back to the first time I did the program and I remember FREAKING out about the 3 minute runs, because "there's no WAY I can run 3 WHOLE MINUTES at a time!" I've never actually run a race, because when I was ready to start running races, I found out I was pregnant -- I think my first 5K is going to be on September 14 during my 10 year class reunion. I can't WAIT!

I want you to know that you're the person that pops into my head every time I don't want to go out and exercise. So thanks for being awesome.

OH yeah, we will get to a Disney race! Glad we are making progress on persuading you. ;-)