It's All Going To Shit

Well the world is shutting down. I'm glad I still have some groceries. So far my kid still has school and we are both still going to work. Scott takes the commuter train usually but said yesterday he might just drive since there is no traffic. Everyone working in the bay area is teleworking but him lol. Kind of hard to tele-work on a car engine.

Spring break for Trevor's school isn't until Good Friday so we'll see if they stay open. All the neighboring districts are all open still.

We had a teleconference this morning that was basically if you're sick stay home (the girl next to me FINALLY got sent home yesterday, I swear she coughed non stop for 4 days. I told her she needed a breathing treatment, I hope she got one) and that they are putting plans in place for if we have to close down the offices so we can work from home. We'll see, we'll see.

Yesterday I asked my friend that is in charge of the club parties if they had talked about cancelling the dinner on Saturday. She acted just like I thought she would, that I'm stupid and she's been to three crab feeds and hasn't got sick so she's good.  Hours later she sent me a text that I got my wish and the party was cancelled. I was like awwww that wasn't my wish. WTF. We live in a community that is mostly 60+ year old people. Just looking out for them. In a room of 100 people which 1 are you ok with dying if they get this thing. That's the average death toll on the slight side right? In the big pictures it's just a dinner and some games, I can't believe how people act like it's the end of the world that a party got cancelled. 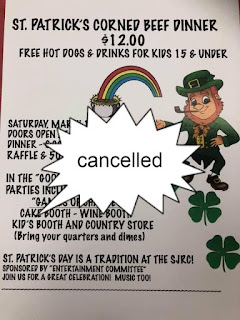 Dinner last night was Skinnytaste Crock Pot Picadillo. I prepped it all the day before and put it in the crock in the fridge so I could just pop it in the cooker. I know myself and mornings are NOT my thing haha. I did make the recipe with ground turkey instead of ground beef. I've been using ground turkey so long now that ground beef doesn't taste all that great to me anymore (except a Western Bacon Cheeseburger from Carl's Jr, for some reason those are delicious lol).

I think this is the first time I've made this recipe and it was just blah. I think it needed more liquid (I actually added more water to it since it seemed like it was going to burn if I didn't). I think a can or two of diced tomatoes and a can of Rotel would make this much better.

Since I had dinner done in the crock pot I made up the 2 big artichokes I had bought. Just one for me and one for Trevor since we are the only ones that like them (Jess ate them too but she lives elsewhere now) Got my "special sauce" to dip them in (ketchup and mayo lol) 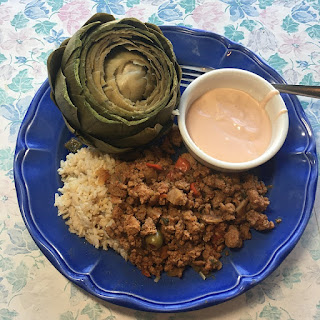 After dinner sewing! I got all my key chains connected and pinned and started sewing. Had to give up at 10:30 to go to bed though. Darn being responsible. I set the bedtime alarm on my phone to go off at 10 every night to remind me to go to bed. It helps haha. 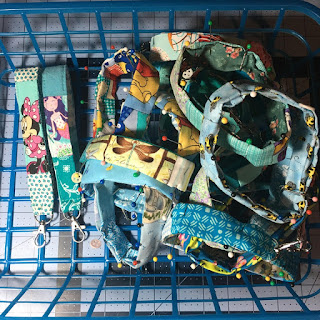 No plans for the weekend other than to go to the twins birthday party on Saturday. Debating on going or not now since I know my one nephew is sick (other brother's family). Mom was holding him when he had a fever so there we go with another virus if we all hang out again. I've been sick most of the year so far so I'd rather not catch something else.