Oh my gosh has the world just gone crazy or what? Since Friday so much has changed. Except work, I'm still here. Although the girl that coughed next to me for 4 days has not come to work since she got sent home on Thursday. I hope she is ok.

So what did we do over the weekend??

Friday after work I went to Joann's to buy some sewing needles and fusible interfacing. I got some more thread while I was there. This time I went for some pinks and a few more of the aquas since I used those sewing my aqua scraps! 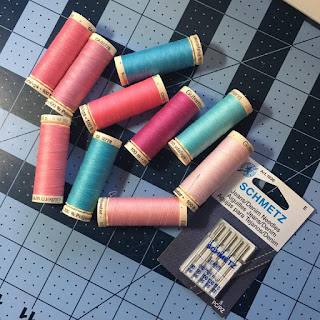 Since I was already out I went over to Panda Express and got dinner for Trevor and I. Scott gets home so late it would be gross by the time he got there. He's been getting home between 7:30 and 8 most nights. 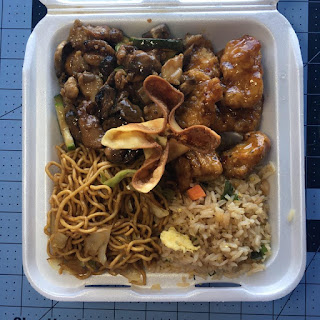 Saturday we decided not to go to the kids birthday party since I still have a little cough and they are all full of germs usually. We almost always get sick after a family party.  My mom who is the germaphobe told me to just take some cough syrup. I'm pretty sure she's been taken over by an alien.

Saturday night for dinner I made some chicken and rice with frozen veggies. I just cook the chicken with some onions and a bit of oil, cook the rice, warm up the frozen veggies and then throw it all in the skillet. Add some soy sauce when it's done. 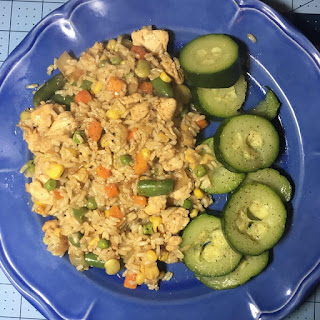 I'm starting to ration out our meat a bit so it lasts longer. The stores are CRAZY here. I told Scott on Saturday night that he should have his mom get her list ready and go to Winco when they open at 5am. They are closing down to restock now. He didn't listen and tried going at 11:30am. He stood in line for 1/2 an hour with hundreds of people waiting to get into the store. Then he had to pee so he left lol. I'm like hmm told you so!

He went back Monday morning at 5:30 and was about 40th in line waiting for them to open. He stood there for almost 2 hours before they opened up. He got JUST what his mom had on her list (and cat litter and coffee for us). Wouldn't want to get any extra or anything! Men are so funny.

My Dad went to Food 4 Less in Stockton. No line to get in but the line to check out was 45 minutes long with the line going all the way to the back of the store. 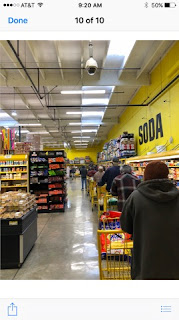 My friend Allen at Safeway over the weekend. 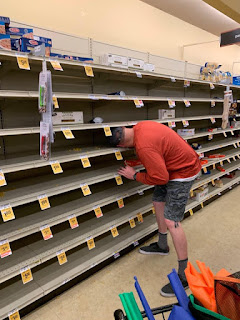 I'm like you should have grabbed that pasta on the top shelf!

Sunday night I made this recipe for Sesame Encrusted Chicken. My phone died while I was making it and I got tired of waiting for it to come to life so I ate it before I could take a picture. I thought I had sesame seeds when I went shopping so I didn't buy any. Surprise, no seeds!  While I was looking for those I found some "salad toppers" so I crunched those up with a rolling pin and added that to the panko. Turned out pretty good!

Monday night I made Asian Glazed Chicken Drumsticks. This made a really weird smell when I added the liquid to the meat in the skillet and kind of turned me off. I don't think I'll make this one again, it was just "ok". My asparagus on the other hand was delicious! I roasted it in the oven with some olive oil.

Instead of cooking my whole big pack of drumsticks I saved about 1/2 to use for another night. I know if I cooked it all the boys would eat it all.  I have about 6 nights worth of meat left before I have to go to the store. I ordered some cat and dog food online, I hope it gets delivered. Rusty gets really sick if I change his dog food. I have some still but heard that it's getting hard to find so thought I'd try and get some before I'm out.

Tonight I'm going to make a corned beef and cabbage soup recipe. We're not huge corned beef fans so I thought it might be fun to do a spin on it with other things added in.

SEWING! I did a lot of sewing over the weekend (surprise!). I am going to have a lot of stock once the world returns to normal! I feel really bad for event organizers who are having to cancel all the events they worked so hard on. They are having to refund people's money. I saw a negative post about the one I do the most with because she told the people that she couldn't refund immediately but would try to soon or they could use it towards when the shows start happening again. People are losing their minds I tell ya!

Finished up the key chains I had started. I ordered more of the clips off Amazon and got those already so I'll have more if I need them. 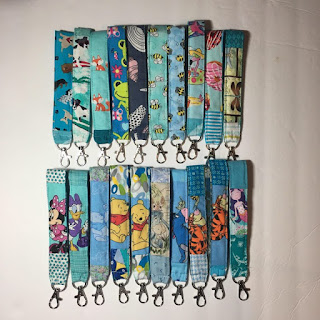 Then switched over to mug cozies. Here is what I got FINISHED over the weekend. Still working on a basket full. Trying to do at least one of all the animal fabrics I had cut out when I went through those plus a few more to "restock" if I had them cut out already. 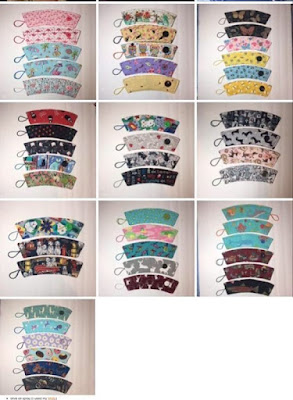 My sewing machine was being a pita with it's tension. I got pissed off yesterday and really messed with it to try and fix it. I was like that's it! I'm just going to go buy a new sewing machine and then miraculously it started working right. I swear it heard me haha.

Just heard that our Stockton office is closed due to exposure and cleaning. I'm like who gets to clean? All the Bay Area offices are closed and people are teleworking. I think we will be doing the same by the end of the week. Scott works in the Bay Area but is considered essential because he's automotive. I think it's weird that automotive is included but hey he is still getting a paycheck so I'm not going to argue!

Happy St. Patrick's Day everyone! I forgot to wear green this morning so I might get pinched if someone comes dares to come closer than 6'.

Wow you're so busy. I am so tired of coming up with meals for dinner.I wish someone would just make me dinner every night. M-F and I'll do weekends. Wouldn't that be wonderful?Next time someone asks me what I want for Xmas, that will be it - a dinner chef. :-)
I so hate cooking and it feels like it's all I do!

Your mother is an alien.. ha ha ha. Gosh you've done heaps of sewing. I'm cutting down on how much I cook too, though our supermarkets dont seem to be running out of much except loo paper and hand sanitizer...YET. It is bloody crazy out there!