Yesterday was my mother in law's 90th birthday.  We debated on what to do but went with the "Under 10 people" gathering. Scott is doing her shopping so our germs are pretty much over there anyways. So hard to make decisions on things like this.

So I had to go into the office yesterday to do a report (I had left my binder with passwords in my locked desk drawer, not expecting to be staying home). It was kind of nice going in and working. Weird, you wouldn't think that right? Got my report done.

Sent my mom a text asking if she needed anything while I was in town. She went back a little list so 3 stores later, still no TP. I tried a few different stores to check out what the inventory was like (and to not go too far out of the area I was in).

In Dollar Tree there was 6 teenage boys with their skateboards. I'm like where are your parents? You shouldn't be out and so close together (in my head). I overheard one boy saying they weren't worried about getting the virus because his family has strong genes. I hope you're right boy!

Then I ran into the Mexican grocery store. No TP there but I got a pack of paper towels just in case.

After that I went to Cost Less (I think that's what it's called) and got everything else on the list except flour and TP. But I did get an 8 pack of paper towels (just in case).  I'm glad I got an extra thing of flour when I went shopping I can just give mom some of mine.

After that I went and picked up the pizza, we always do Papa Murphy's. After Scott got home we went to his moms and had pizza She ate 3 pieces and then sat back and said how horrible it was. LMAO. No surprise she always complains about food. I think it's kind of hilarious. Like why did you continue to eat it if it was that bad? (Also she totally wanted some of the left overs for later)

I made her a little smash sized cake for her candles (getting all weird about blowing candles now since someone always has something) and cupcakes for everyone else.

She sat there for awhile before she blew out her candles. I was like so there's a lot of wax there so I guess you can take your time haha. 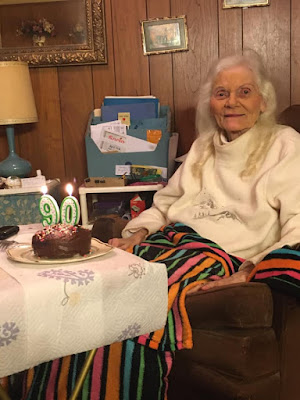 She ate half that cake and then pulled out a huge cookie and ate that too. Not sure where she put it.

She got flowers from one of her daughters. She didn't hear anything from three of her children. WTF Is wrong with people? Who doesn't call their 90 year old mother for her birthday? They should have all been planning a party (that would have got cancelled-but no one even planned one).  Sad that people are so into themselves they don't think about their parents.

Anyhow, several of my mother in laws siblings lived into their 90's. Her father was 96 I think she said. Pretty good track record!

She looks pretty darn good for 90. I don't understand people who do that to their parents, ignore them.
Glad you were able to give her a small celebration.