The Last of March

I ended up going to be early last night. Maybe a tiny bit of depression. One more month of teleworking and the world turned off. Let's hope life can resume after that. Fingers crossed.

I have watched so much Netflix lately.

Yesterday I went to change the laundry and saw the hedge trimmers. I ended up trimming all the bushes on the one side of the house.

Later I went to take the dogs out and we went for a walk around the block. It felt good to stretch out a little I feel like all I've done for a week is sit. I definitely need to buy an office chair.

I finally saw my neighbor's son and confirmed that he did pass away last weekend. (well 2 Saturday's ago now) He said he died in his sleep. He'd been having dementia for a couple months and then problems with his legs. He was 92 so lived a long life. He said he heard his dad talking to his mom the day before he passed away. She passed away about 5 years or so ago. I may have cried standing in the street talking to him. I asked him if he was going to live in the house now and he said his dad left it to his 2 granddaughters. One with two children might move in. It would be nice to have some little kids on the block again.

I didn't do any sewing yesterday but I did cut out my bags from the pieced pieces. Now I need to pull out some coordinating fabric for the lining.

For dinner last night I made Chicken Orzo Soup I had taken a screen shot from a recipe from Pinterest but then the instructions didn't totally match up with the ingredients so it ended up being a toss this and that in the pot haha. It turned out ok. I made some drop biscuits to go with it and they were so good! Not sure why they were so good since it's just basically flour water and butter. It had to have been the butter right? lol 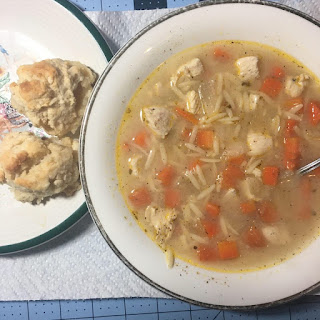 Now to decide what to make with some more chicken breasts for diner tonight. Cooking is like the evening entertainment around here. Sadly I don't find laundry as exciting.
Pin It
Posted by Julie H at 8:16 AM