Good morning happy Easter! I was thinking this morning this is probably the first Easter ever I woke up with no one home. I moved out when I was 18 but it was after Easter and then Scott and I were together for the next one. Trevor had to work today and he left early in hopes of getting off early.
Yesterday it was sprinkling and raining a bit in the morning. It still looked like it was going to rain when it was time for the egg hunt so I put on jeans and real shoes. Got there and the clouds parted and it was so hot. Weird weather!
There was new people running the egg hunt this year so they did things a little different. They took awhile to get to the actual egg hunt part so we had to keep the little one busy. Well actually we had to chase him around so he wouldn't go get the eggs, end up in the canal or touch the dog that wasn't all that friendly (why bring a non friendly dog to a children's event sheesh).
I went for a swing with him on my lap he loved that. I started to feel a little dizzy though, probably because of my ears being all messed up. 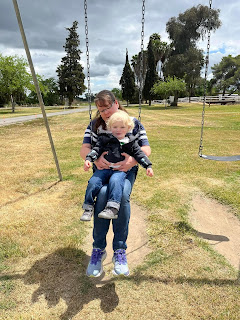 Not a fan of the Easter bunny lol 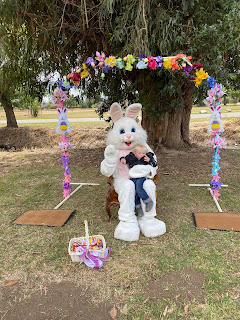 This bubble wand was cool but it got broke right away. It made HUGE bubbles 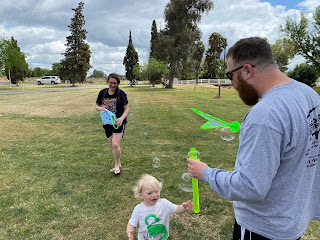 He tried to feed the goats some sticks. I did a video of the egg hunt but I'm too lazy to try and put it on here right now. He got a ton! 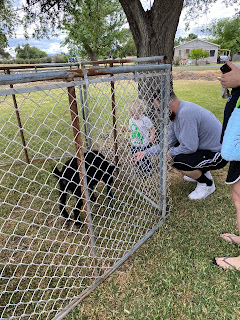 After the egg hunt I went home and tried to take a nap but just laid there. I ended up ordering frozen pizzas from Instacart so everyone would have something to eat for dinner. I cooked them and cut them up and put them on a cookie sheet then took them over to Jessica's. Daniel enjoyed his walking around lol. 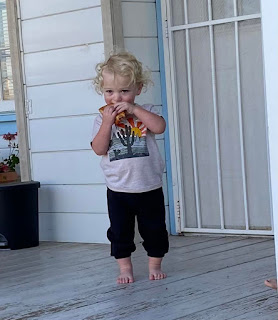 Egg time! He's like what am I supposed to do with this? 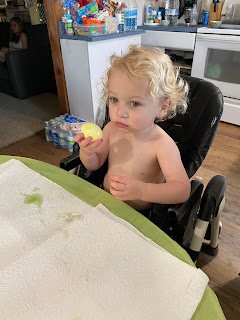 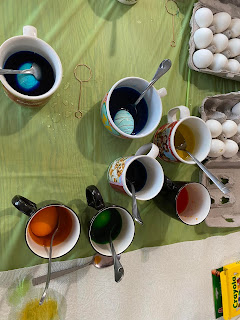 My girls, Daniel's sister and her friend 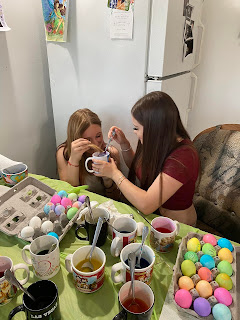 He was having fun with the crayons 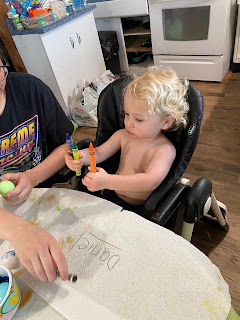 My mom stopped by with baskets for the kids and snapped this picture, she brought Adrian with her (on the other side of Melissa) 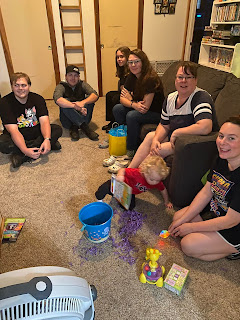 Playing with his toys from Grandma Sandy 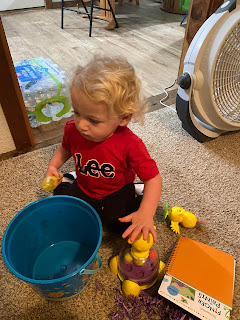 Today's plan is to drink another cup of coffee then get some beans going in the crock pot (trying a new recipe) and making some cup cakes. Dinner is around 3. Trevor has my car since his truck has a nail in the tire and he's already using his spare. Someone one will have to come pick me up since I have all the food here haha.
Ok that's all the excitement I've got so far today! Have a nice Easter :)
Pin It
Posted by Julie H at 9:36 AM