Good morning happy Saturday!
I couldn't sleep so I just got up. I'm pretty much packed and ready to go on my little road trip with my mom. Just have to fix my bangs and throw a few more toiletry things in my bag.  Should have vacuumed my car out but no time for that.
I cleaned ALL day yesterday and when I got done it was time to cook dinner. I remember now why we went out to eat lol. But it is nice having a clean house and everyone over too.
Scott brought his mom and she wouldn't even sit on the daybed. That was a waste. Oh well the kids liked sitting and laying on it. She sat on the couch then acted like she couldn't walk 5 steps from her walker to the table. I was like I just saw you run down the hall the other day you can do it sheesh. Drama queen. After dinner and cupcakes she decided she was ready to go home so that was sad for Scott since he of course didn't want to leave. Sigh.
My alarm to get up just went off lol. I'm up!
The rest of dinner was nice even though I forgot to put out the appetizer trays I bought. I made loaded chicken potato bake x 3. I did a little one with no hot sauce and just cheddar for his mom. There was hardly any left. I panicked when I started making it that I wasn't going to have enough food for everyone and had my mom stop on the way and get a loaf of bread and a little pasta side dish. I should have made a mac salad or something but I didn't think far enough ahead. Next time! 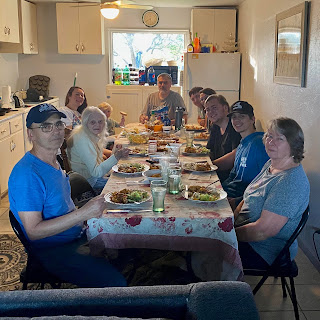 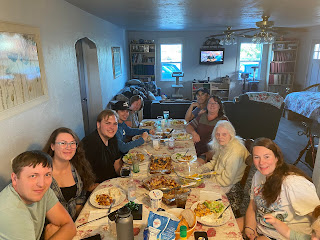 Mr. Adorable. Yesterday was also his 6 month birthday so he is officially 1 1/2. 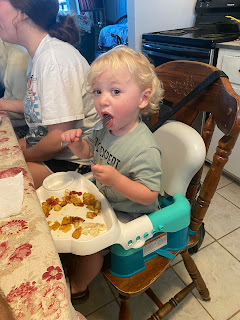 Melissa's boyfriend Eric's birthday is the day after hers so candles for everyone! 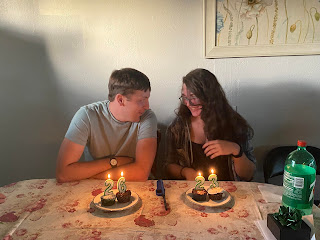 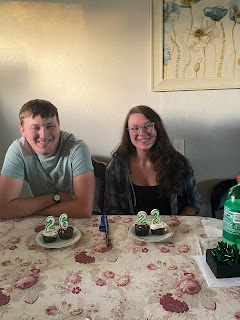 Dinner start time 6pm, everyone gone by 9:30pm lol.
Tubby enjoying the new to us cat tower. Jess kicked it out since her cat was too big to sit on the top and wasn't all that interested in it. My cats are like wohooo more rope scratchers. 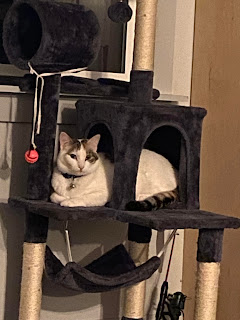 I was laying on the couch for a little bit then decided to go to the bar.  Ah interesting people to talk to even though half of them are totally whack haha. Gotta love the guy who says he was the best at everything and wants to date 20 year olds (and he's almost 60 freaking disgusting).  There is a newer guy who is a total pot head but he's so interesting to talk to. He was talking about the Love Canal in New York, I have to look that up still. 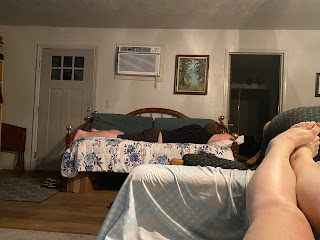 Ok guess I should go fix my hair real quick and tape roll my passenger seat in the car so my mom isn't covered in dog hair ;) Trevor just took a Covid test since he woke up with a scratchy throat, negative TG. Need to order some more of these free ones, it is nice to have them for peace of mind. Hopefully the drive is nice and there isn't a ton of traffic. It is four hours to where we are going in Nevada. My mom doesn't like to gamble at all so that is sad but might save me some money haha.
Pin It
Posted by Julie H at 7:14 AM

Were you too young to know about the Love Canal?
To drive to or through it now looks like a very sad ghost town. At least it did back in the day when we went by / through there. Sad as hell though.
Nothing better to come home to a clean house too so I hope you do!!