Good morning happy Wednesday! I actually had to look to see what day it is so that tells you how well I'm doing today. Yesterday afternoon I felt like crap so called out the rest of the day. Exhaustion, depression, and cramps (oh lay!)
Jess and I went to lunch at my favorite Mexican restaurant in town. I left a note in large sharpie on Ann's walker that I went to the store and I'd be right back. No idea if she read it or not but she was a little bit awake when I got back. At least she wasn't at the neighbors lol.
I spent a little bit of time going back through a box of stuff that needed to be saved in the office. I took pictures of these pictures and then put them in the hall closet. I was trying to put them in there anyways but there was so much random crap just thrown in it took me a minute. Ann was like what are you looking for? I swear she is never awake or with it until I'm trying to organize something. I've never seen such unorganized cabinets.  I'd die to have so many in my house, I sure wouldn't waste the space by having everything all willy nilly in there.
Anyhow, here are a few fun pictures. I have not seen very many of Ann's family (MIL). I think they were really poor and she got married and moved away when she wasn't quite 18 where she was still poor so I imagine not much money for cameras and developing film.
I don't know who the girls on the right are but my mother in law is on the far left. She has the tiniest pixie face. The girl next to her resembles Scott's sisters so I'd be surprised if she wasn't one of her sisters or relatives. 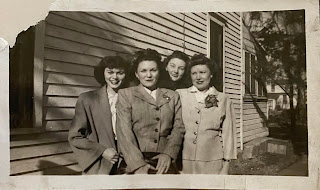 This one had writing on the back. Left to right is her mom, her brother Orville, sister Mildred (Melissa connected with her granddaughter on 23 and me), brother Bill, sister Lola and her dad. MIL was the youngest of 9 kids. 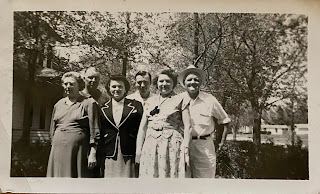 Here is my father in law in a baby buggy. His family was well off and he was an only child so there are a lot more pictures of him. 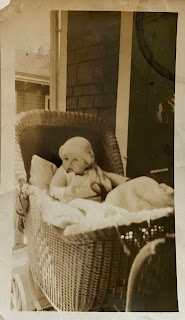 I couldn't read the name of the boy on the left but my FIL and my son look so much alike in this picture. 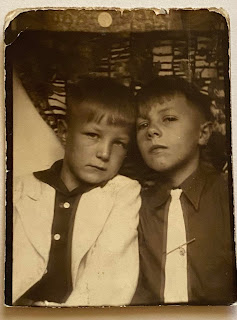 After getting that in the cabinet I just went back to the couch and took a nap lol. No point in trying to clean shit when it upsets her and she is awake.
This morning she was in the kitchen trying to get a cup of milk in a glass bowl. So weird. I got her her favorite mug. She had breakfast before Scott left too so she's a bit more with it today already.
I'm so tired of being here every day. I have mixed feelings on having her at my house too. Scott will bring her over on Friday for Melissa's birthday. He was saying maybe he'll just have her spend the night since we have the bed for her. I told him we need to make sure and pack all her crap.
Saturday morning my mom and I are running away to go to my uncle's anniversary party so we'll be gone for the weekend. I'm excited to get out and do something!
Pin It
Posted by Julie H at 9:31 AM

I wish there was a better solution for you. You could be doing this for another 5 or more years. It's not fair to you either.
Do love those pictures though. Sad to think when I die people will have to look thru a phone or computer because there aren't many pictures from the last couple of decades. :-(

@Peg time to get some pictures made (for me too!)