Today I took Melissa and Trevor to the library. They were having "Batwoman" come and talk about bats and bring :::squeal::: live bats!

Now if you've been around awhile you know that we've had some experience with bats.

There was the time that I had one flying around the house and the neighbor (and the cat) helped me finally knock it down and (sadly NOW, not then) kill it. Yes my view of bats has changed a bit over the years!

Then there was another time, not too long after that first time that we had one flying around the house AGAIN. Scott caught that one with a fishing net and let it go outside (I think). While he was outside there was ANOTHER ONE that had fallen in the TOILET and I flushed it and it went to live with Nemo. (sad face again).

Then he fixed the hole where they were getting in. Did I mention that he hates anything that flies?

Fast forward a few years and we had a bunch living in the garage. There were several times I went out there and there would be one flying around. One time one even brushed my face with it's wings. ::Shudders::

AND we can't forget the bat(MANOHMAN) at the zoo.

So ANYHOW we went to the library and this gal did a really great presentation. (oh look I found her website) I always thought we had fruit bats but she said there are no fruit bats in the United States. She had four different kinds of bats and she had a set up where she would hold the bat and you could see it up on the screen. It was pretty cool. She even fed one some grubs.  My pictures aren't that great but here's a couple.

This is a head peaking out of her hand that is closed around it. 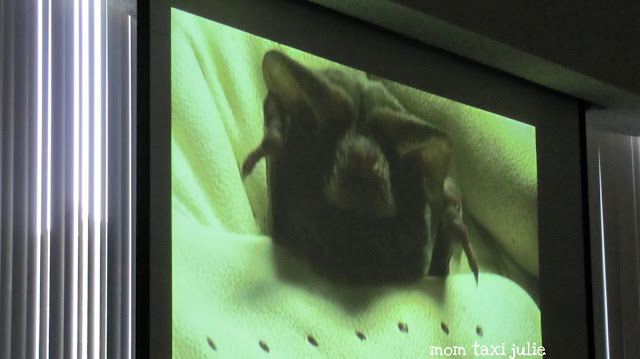 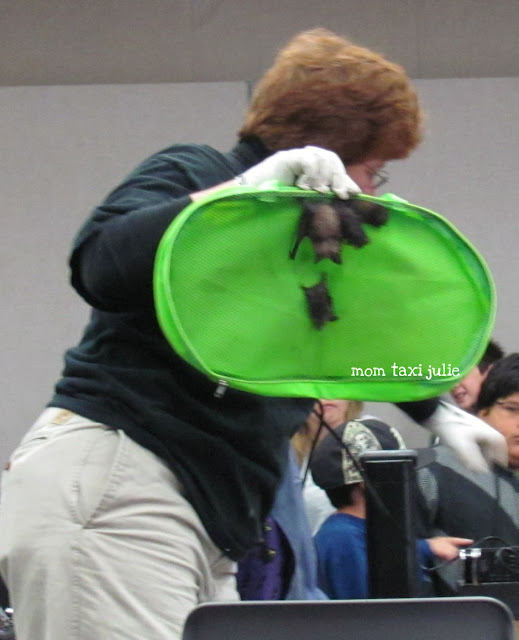 Aren't they tiny? I always think of them as being big like that one at the zoo but those aren't here in the states. 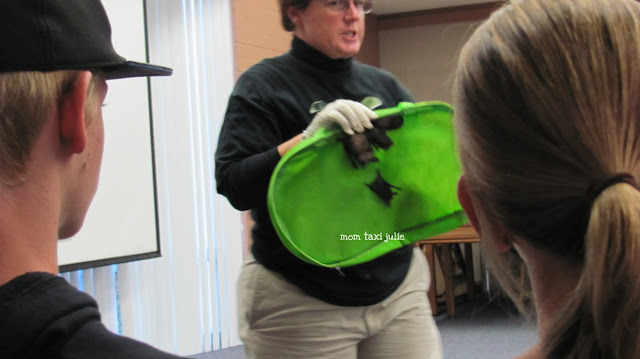 They always let kids sit on the floor in the middle and then put the chairs around them. The kids today were HORRIBLE. I think they should have put a line on the floor and told them they had to stay behind it. She had to keep asking them to move back and not to touch the table. There was one little girl that talked the whole time and she kept asking her to be quiet. I think she had a bigger sister with her. Where was the freaking parents? Eventually the dad finally showed up and took her out of the floor area. I mean, these are BATS. They aren't kittens. Let's not take a chance on getting bit, umm kay?

There was another (overweight) girl sitting on the floor and she either was wearing a thong or some very ripped up panties. I couldn't tell I was so distracted by her CRACK. Panties cost about $5 for a pack of 10 if you get them on sale. It's just mean and wrong to have your kid wearing nasty things like that.

Other than the obnoxious kids and missing parents it was really interesting!

Labels: bad kids, Bats are cool, Free Stuff, Things to do in Tracy

I am freaked out by bats.
Shame about the kids being pains in the butt.