Good morning/early afternoon!
I just got finished up with all my emails from this morning. I was going to go into the office today but I just wasn't feeling it so decided to wait until next week. I am just going in to do some printing/filing and a few letters for new contracts. Nothing pressing.
Yesterday I worked on cleaning up all the scraps and fabric I had pulled out for the mug rugs. While I was at it I cut out a bunch of wine bags, make up bags and zip bags out of some upholstery/home dec type fabrics. Cleaned out quite a few and have a stack of each to work on when I'm ready. 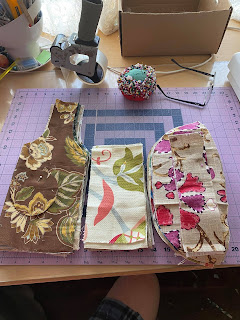 After work I went to Joanns. I ended up just buying a full bolt of fusible fleece with my 50% off coupon. I tried to use the calendar coupon of $20 off $60 or more but it  wouldn't work. That's ok though, still got a deal! They had their thread buy 3 get 2 so I got more white and 1 black spools. They were pretty much wiped out on those after I was got mine. 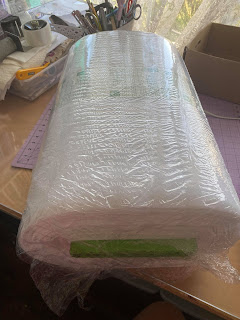 Trevor wanted Hawaiian BBQ for dinner. I've decided I don't really like their meat there so I tried the shrimp. They were good! This "mini meal" was more than enough. That place is kind of expensive. $8.99 for this without a drink. 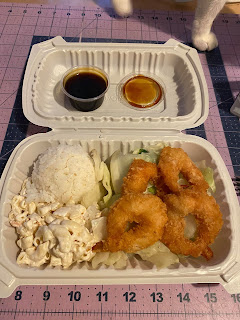 I know my boy is feeling better when he wants food haha. This morning he did the dishes and made us breakfast! He said he was getting winded really fast though so had to take a bunch of breaks. Hopefully soon he won't have that happen.
Scott went to work again today (late). Yesterday he only made it a few hours so hopefully he can make it longer today. He is mostly just having a bunch of nausea. So weird.
And then there is me, still doing some coughing. Hopefully that goes away soon!
I am going to work on cutting out the batting for my mug rugs next and then doing the top stitching. Shouldn't take me too long.
Finally ventured out to the garage to work on laundry. Rewashing that comforter that sat in the washer forever. Hopefully it didn't get moldy! I really need to work on my yard it is so over grown. Daniel was going to work on it right before we all got the creeping crud and now everyone can't breathe lol. Not funny but we're all a little messed up. I should order another pull cord for the mower since it still has that shoe lace tied to it.
Well there's the timer off to go change the laundry!
Pin It
Posted by Julie H at 11:50 AM